SIGNED They Knew by Sarah Kendzior 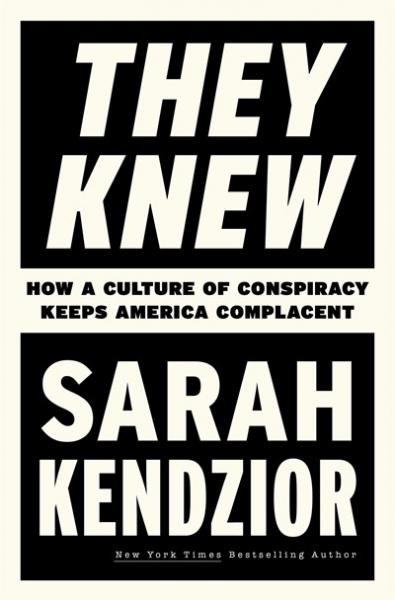 Sarah Kendzior's new book They Knew: How a Culture of Conspiracy Keeps America Complacent comes out on September 13th.

Get your order in now for a signed or signed and personalized copy.**

Get your orders in before September 1st to ensure your order will be signed with the first group to be mailed out. All books will be mailed out Priority Mail through USPS to be insured delivery.

Once the books have arrived to our store, Sarah Kendzior will come in to sign and personalize copies for pick up or mail out. As we anticipate a lot of orders for this book, we anticipate all books to be mailed within 5-10 days of the books publication date. If there are any delays in publication due to unforeseen circumstances, we will update this page.

From one of the sharpest political voices of our time, They Knew is New York Times bestselling author Sarah Kendzior's deep dive into the conspiracies that have shaped, and will continue to shape, our increasingly polarized democracy.

In an age of QAnon and widespread misinformation, conspiracy theories cannot be dismissed as one-off or fringe belief systems. In They Knew, best-selling political author Sarah Kendzior explores the United States' "culture of conspiracy," the inevitable aftermath of decades of criminal impunity by the country's elite. Pulling from years of experience as a political commentator, she puts forth a timely and unflinching argument: uncritical faith in broken institutions is as dangerous as wild false narratives peddled by propagandists. As powerful actors secretly carry out plans that protect their interests-like the Jeffrey Epstein operation-it's unsurprising that conspiracy theories are on the rise.

Through its discussion of the most influential conspiracy theories and unpunished government corruption of our moment, They Knew is a critical look at how we might rebuild our democracy by unearthing the political lies and crimes that have shaped us. The truth may hurt--but the lies will kill us.

Sarah Kendzior is the New York Times bestselling author of Hiding in Plain Sight and The View from Flyover Country. She is known for her reporting on St. Louis, her coverage of the 2016 election, and her academic research on authoritarian states. She is the co-host of the acclaimed podcast Gaslit Nation with Andrea Chalupa and was named by Foreign Policy as one of the "100 people you should be following on Twitter to make sense of global events." Her reporting has been featured in many publications, including Politico, Slate, The Atlantic, Fast Company, The Chicago Tribune, TeenVogue, The Globe and Mail, and The New York Times. She lives in St. Louis.