Tuesday, June 28, 6:30pm CT / 7:30pm ET
Register for the Zoom event here
Attend for free or select a ticket option to include a copy of one of the authors' books from Left Bank Books 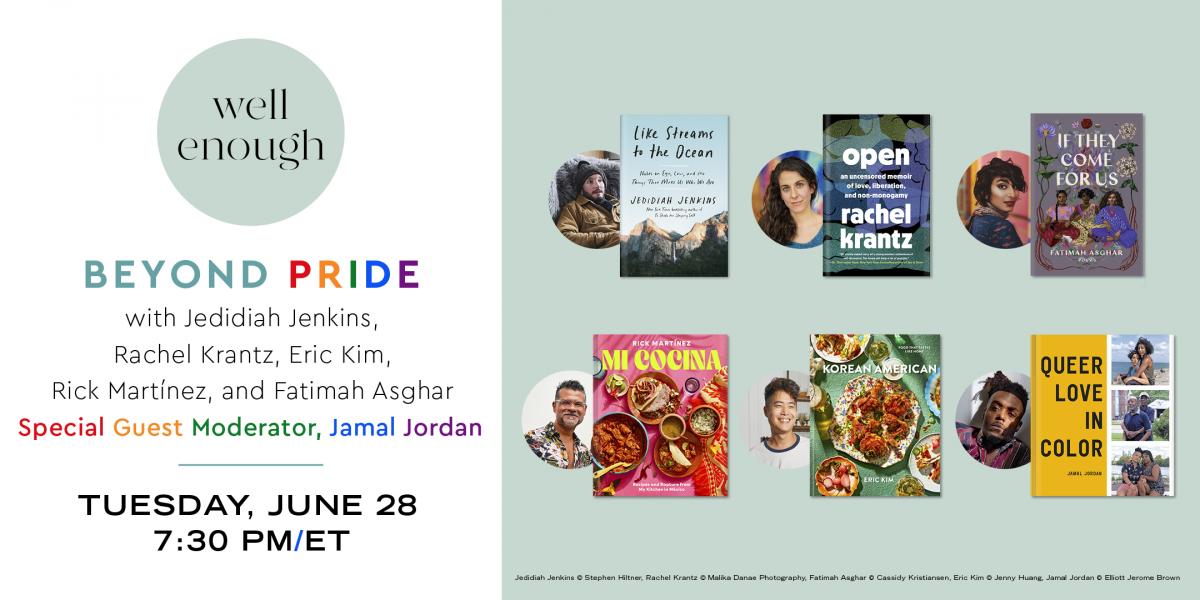 At the end of a festive month of Pride celebrations, after the glitter has been swept away, the parties have tapered, and the sounds of cheer have faded (slightly!) in the streets—how do we stay connected to ourselves and the communities we champion, year-round? What are the small and big spaces we can continue to cultivate with a sense of pride and joy?

Join Random House and our panel of LGBTQ+ authors for Well Enough: Beyond Pride, a live, virtual conversation about what it means to be well enough as a queer person. On Tuesday, June 28 at 7:30 p.m. ET on Zoom, you’ll hear from an array of authors—from memoirists to cookbook authors to fiction writers—about the day-to-day practices they take with them from the kitchen to the laptop to the road, as ways of nourishing their communities, families, and themselves with love and acceptance.

Panelists Fatimah Asghar (If They Come For Us), Jedidiah Jenkins (Like Streams to the Ocean), Eric Kim (Korean American), Rachel Krantz (Open), and Rick Martinez (Mi Cocina) will appear in conversation together. We are joined by special guest moderator Jamal Jordan!

When you register for your free ticket, you will also have the option to purchase books by any of the featured authors. Book orders will be fulfilled and shipped by our queer-owned independent bookstore partner, Left Bank Books, based in St. Louis, MO. You also have the option to donate any amount you wish to Lambda Literary, whose mission is to nurture and advocate for LGBTQ writers, elevating the impact of their words to create community, preserve LGBTQ legacies, and affirm the value of LGBTQ stories and lives. You do not have to purchase a book or donate to attend the event.

Save your spot today!

Wellness means something different to everyone, wherever you are on your wellness journey. We have experts in every area—health, nutrition, diet, cooking, fitness, mindfulness, spirituality, business, financial, emotional, parenting, relationships—sharing curated content for what matters to you. There’s never been a better time to start or deepen your wellness practice.

Fatimah Asghar, author of If They Come for Us, is a poet, filmmaker, educator, and performer. She is the writer and co-creator of Brown Girls, an Emmy-nominated web series that highlights friendships between women of color. Along with Safia Elhillo, she is the editor of Halal If You Hear Me, an anthology that celebrates Muslim writers who are also women, queer, gender-nonconforming, and/or trans. Her debut novel, WHEN WE WERE SISTERS will be published by One World in October.

Jedidiah Jenkins is a travel writer, an entrepreneur, and the New York Times bestselling author of To Shake the Sleeping Self and Like Streams to the Ocean. He is the executive editor of Wilderness magazine. Jenkins’s work has appeared in The Paris Review and Playboy, and he has been covered by National Geographic.

Eric Kim is a New York Times staff writer born and raised in Atlanta, Georgia, and the author of Korean American: Food That Tastes Like Home (Clarkson Potter, 2022). He worked his way through the literary and culinary world to eventually become a digital manager at Food Network and a senior editor at Food52, where he amassed a devoted readership for his "Table for One" column. He now hosts regular videos on NYT Cooking's YouTube channel and writes a monthly column for The New York Times Magazine. A former contributing editor at Saveur, Eric taught writing and literature at Columbia University, and his work has been featured in The Washington Post, Bon Appétit, and Food & Wine. He lives with his rescue pup, Quentin Compson, in New York City

Rachel Krantz is a journalist and one of the founding editors of Bustle, where she served as senior features editor for three years. Her work has been featured on NPR, The Guardian, Vox, Vice, and many other outlets. She’s the recipient of the Robert F. Kennedy Journalism Award, the Investigative Reporters and Editors Radio Award, the Edward R. Murrow Award, and the Peabody Award for her work as an investigative reporter with YR Media. She recently launched a new podcast called “Help Existing.” Open is her first book.

Rick Martínez is the host of the YouTube series Pruébalo on the Babish Culinary Universe and the Food52 video series Sweet Heat. He cohosts the Borderline Salty podcast with Carla Lalli Music, is a regular contributor to Bon Appétit magazine and The New York Times, and teaches live, weekly cooking classes for the Food Network Kitchen. He currently resides in Mazatlán, cooking, eating, and enjoying the Mexican Pacific coast.

Jamal Jordan is a mixed-media documentarian and occasional professor. He's worked with VICE News, NBC News and, most recently, the New York Times (where the Queer Love in Color adventure began).

If They Come for Us: Poems (Paperback)

Like Streams to the Ocean: Notes on Ego, Love, and the Things That Make Us Who We Are: Essaysc (Paperback)

Mi Cocina: Recipes and Rapture from My Kitchen in Mexico: A Cookbook (Hardcover)