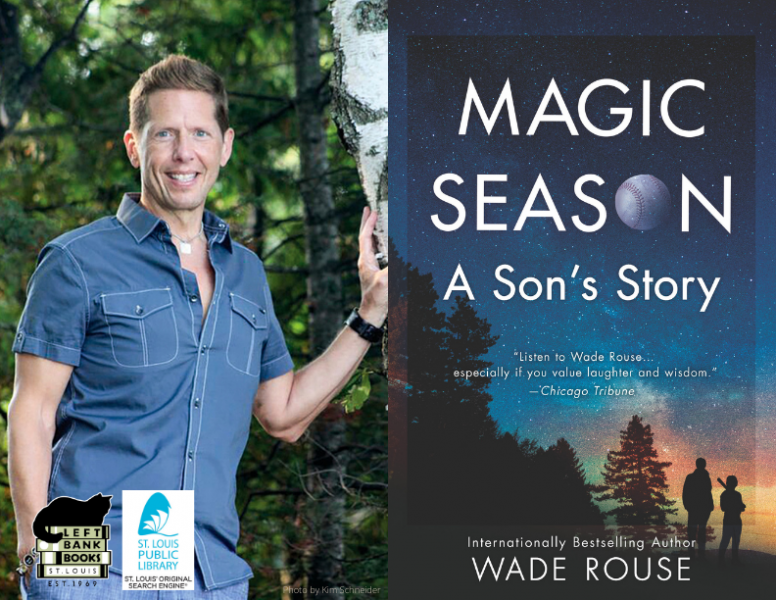 Left Bank Books & St. Louis Public Library welcome former St. Louisan & internationally bestselling author
Wade Rouse,
who will discuss his new memoir,
Magic Season: A Son's Story,
in person at St. Louis Public Library - Schlafly Branch
and virtually on our YouTube Live Page at 6pm CT on May 3rd.
This is the LAUNCH EVENT to celebrate the book birthday!
Join us in person or on our YouTube Live Page and order a copy of
Magic Season: A Son's Story
from Left Bank Books to support authors and independent bookstores!
You can request a personalized copy of the book by leaving your request in the order comments.
Wade Rouse is an internationally bestselling author of thirteen books, which have been translated into twenty languages and selected as Today Show Must-Reads, Indie Next Picks and Michigan Notable Books. Rouse writes fiction under his grandma's name, Viola Shipman, to honor the working-poor Ozarks woman whose memory inspires his writing. He lives in Michigan and California, and hosts Wine & Words with Wade, a literary happy hour, every Thursday.
"Honest, authentic, heartbreaking and healing. I devoured it in one day."--Jenny Lawson, #1 New York Times bestselling author

Bestselling author Wade Rouse finds solace with his dying father through their shared love of baseball in this poignant, illuminating memoir of family and forgiveness.

Before his success in public relations, his loving marriage and his storied writing career, Wade Rouse was simply Ted Rouse's son. A queer kid in a conservative Ozarks community, Wade struggled at a young age to garner his father's approval and find his voice. For his part, Ted was a hard-lined engineer, offering little emotional support or encouragement. But Wade and Ted had one thing in common: an undying love of the St. Louis Cardinals.

For decades, baseball offered Wade and his father a shared vocabulary--a way to stay in touch, to connect and to express their emotions. But when his father's health takes a turn for the worst, Wade returns to southwest Missouri to share one final season with his father. As the Cards race towards a dramatic pennant race, Wade and his father begin to open up in way they never thought possible. Together, inning by inning during their own magic season, they'll move towards forgiveness, reconciliation, and peace.

The Edge of Summer (Paperback)

At Least in the City Someone Would Hear Me Scream: Misadventures in Search of the Simple Life (Paperback)

The Edge of Summer (Hardcover)

The Secret of Snow (Paperback)