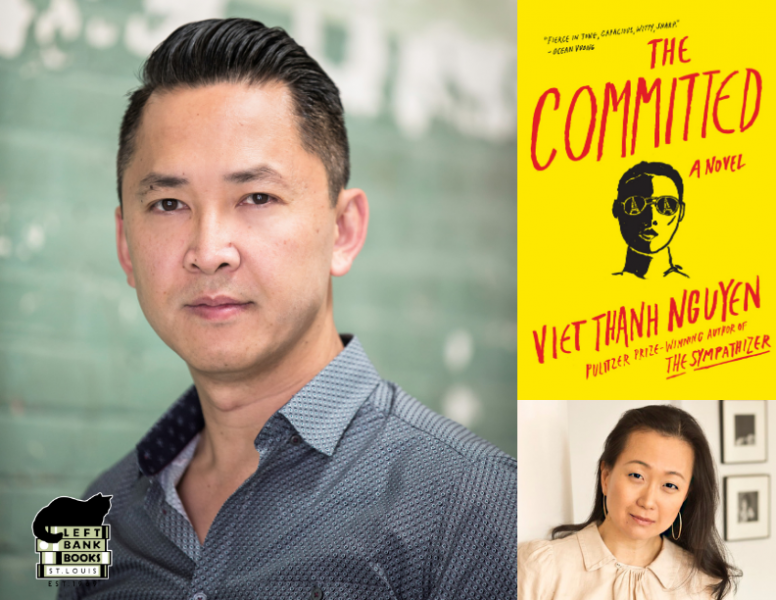 Left Bank Books welcomes award-winning author
Viet Thanh Nguyen,
who will discuss his new novel,
The Committed,
on March 9, 2021 at 7pm CT in a private online event.
Nguyen will be in conversation with bestselling author
Min Jin Lee
This is an exclusive event that requires purchase of a copy of
The Committed
from Left Bank Books for admission.

The long-awaited new novel from one of America's most highly regarded contemporary writers, The Committed follows the unnamed Sympathizer as he arrives in Paris in the early 1980s with his blood brother Bon. The pair try to overcome their pasts and ensure their futures by engaging in capitalism in one of its purest forms: drug dealing.

Traumatized by his reeducation at the hands of his former best friend, Man, and struggling to assimilate into French culture, the Sympathizer finds Paris both seductive and disturbing. As he falls in with a group of left-wing intellectuals whom he meets at dinner parties given by his French Vietnamese "aunt," he finds stimulation for his mind but also customers for his narcotic merchandise. But the new life he is making has perils he has not foreseen, whether the self-torture of addiction, the authoritarianism of a state locked in a colonial mindset, or the seeming paradox of how to reunite his two closest friends whose worldviews put them in absolute opposition. The Sympathizer will need all his wits, resourcefulness, and moral flexibility if he is to prevail.

Both literary thriller and novel of ideas, The Committed is a blistering portrayal of commitment and betrayal that will cement Viet Thanh Nguyen's position in the firmament of American letters.

Viet Thanh Nguyen was born in Vietnam and raised in America. He is the author of The Sympathizer, which was awarded the 2016 Pulitzer Prize for Fiction alongside seven other prizes. He is also the author of the short story collection The Refugees, the nonfiction book Nothing Ever Dies, a finalist for the National Book Award, and is the editor of an anthology of refugee writing, The Displaced. He is the Aerol Arnold Professor of English and American Studies and Ethnicity at the University of Southern California and a recipient of fellowships from the Guggenheim and MacArthur foundations. He lives in Los Angeles.

Min Jin Lee is a recipient of fellowships in Fiction from the Guggenheim Foundation (2018) and the Radcliffe Institute for Advanced Study at Harvard (2018-2019). Her novel Pachinko (2017) was a finalist for the National Book Award for Fiction, a runner-up for the Dayton Literary Peace Prize, winner of the Medici Book Club Prize, and one of the New York Times' "Ten Best Books of 2017." A New York Times bestseller, Pachinko was also one of the "Ten Best Books" of the year for BBC and the New York Public Library, and a "best international fiction" pick for the Canadian Broadcasting Corporation. Her writings have appeared in the New Yorker, NPR's Selected Shorts, One Story, the New York Review of Books, the New York Times Magazine, the New York Times Book Review, the Times Literary Supplement, the Guardian, Condé Nast Traveler, the Times of London, andthe Wall Street Journal.

You may purchase a copy of The Committed from Left Bank Books online or by phone. You must provide an email address to be invited to the private online event. If you have purchased the book from Left Bank, you will receive an email event reminder a few days prior to the event. You will receive the actual email invite to join the private online event on the DAY OF the event.