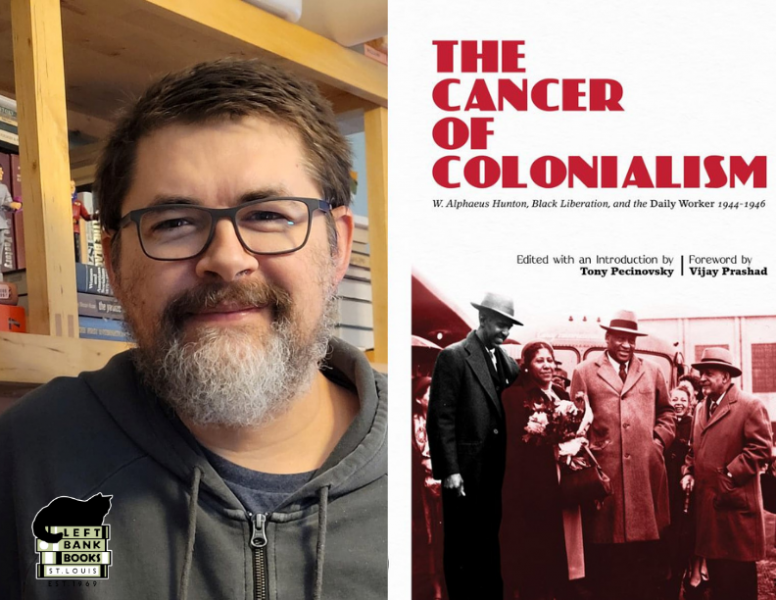 Left Bank Books welcomes journalist, activist, and politician from St. Louis, Missouri and President of the Saint Louis Workers' Education Society
Tony Pecinovsky,
who will discuss his new book,
Cancer of Colonialism,
on our Facebook Live Page at 7pm CT on October 26th.
Pecinovsky will be in conversation with
Dr. Gerald Horne.
Join us on our Facebook Live Page and order a copy of
Cancer of Colonialism
from Left Bank Books to support authors and independent bookstores!

About Cancer of Colonialism

From July 1944 to January 1946, Alphaeus Hunton wrote regularly for the Communist Party, USA's newspaper, the Daily Worker. Collected here for the first time are Hunton's Daily Worker columns. They provide a glimpse into Hunton's Marxist worldview and are important resources for scholars and general readers interested in the evolution of 20th century resistance to Jim Crow and colonial subjugation. Included in this volume is a Foreword by Vijay Prashad and an Introduction by Tony Pecinovsky, as well as a short biography of Hunton enabling readers to better grasp his contributions as an early intellectual and organizational architect of the long struggle for equality and liberation.

In bringing together Alphaeus Hunton's Daily Worker columns, Pecinovsky provides invaluable insight into the political thought of one of the most important radical Black activist-scholars of the 20th century. The Cancer of Colonialism is second only to Dorothy Hunton's Alphaeus Hunton: The Unsung Valiant in excavating the paramountcy of this towering figure in the struggle for Black liberation and socialism. - Charisse Burden-Stelly, co-author, with Gerald Horne, of W.E.B. Du Bois: A Life in American History

Alphaeus Hunton was one of the most prolific and active radical activists of the 20th century Black Freedom Struggle. Unfortunately, few know his name. Pecinovsky's book is an important study into Hunton's journalism, ideas, and activism and offers insight into his radical views in his own words. - Denise M. Lynn, author of Where Is Juliet Stuart Poyntz? Gender, Spycraft, and Anti-Stalinism in the Early Cold War and vice president of the Historians of American Communism

Alphaeus Hunton was truly the "Unsung Valiant" for a good deal of the 20th century. The Cancer of Colonialism reminds us of what we lost when Hunton's brilliant insights were marginalized by his most strident foes. - Gerald Horne, author of The Apocalypse of Settler Colonialism: The Roots of Slavery, White Supremacy, and Capitalism in the 17th Century North America and the Caribbean

About our Speakers
Tony Pecinovsky is the author of "Let Them Tremble: Biographical Interventions Marking 100 Years of the Communist Party, USA" and author/editor of "Faith In The Masses: Essays Celebrating 100 Years of the Communist Party, USA." His forthcoming book is titled "The Cancer of Colonialism: W. Alphaeus Hunton, Black Liberation, and the Daily Worker, 1944-1946." Pecinovsky has appeared on C-SPAN’s "Book TV" and speaks regularly on college and university campuses across the country. 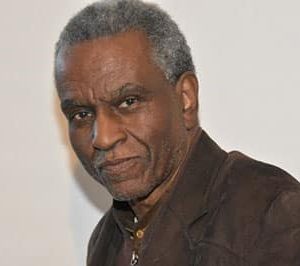 Dr. Gerald Horne holds the Moores Professorship of History and African American Studies at the University of Houston. His research has addressed issues of racism in a variety of relations involving labor, politics, civil rights, international relations and war. Dr. Horne received his Ph.D. in history from Columbia University and his J.D. from the University of California, Berkeley and his B.A. from Princeton University. He is the author of over 30 books, including The Dawning of the Apocalypse: The Roots of Slavery, White Supremacy, Settler Colonialism, and Capitalism in the Long Sixteenth Century winner of the 2021 American Book Award, awarded by the Before Columbus Foundation.
All you need to do to participate is log in to your personal Facebook account, go to Left Bank Books' Facebook Live Page, and wait for the livestream to begin on the page (you may need to refresh the page periodically until the stream begins). You may also watch the simulcast on Left Bank's YouTube channel.
Please call 314-367-6731 or email orders@left-bank.com to order copies of Cancer of Colonialism.
Event address:
Virtual Event
Books:

The Cancer of Colonialism (Paperback)

Faith in the Masses: Essays Celebrating 100 years of the Communist Party USA (Paperback)