Tim Miller - Why We Did It 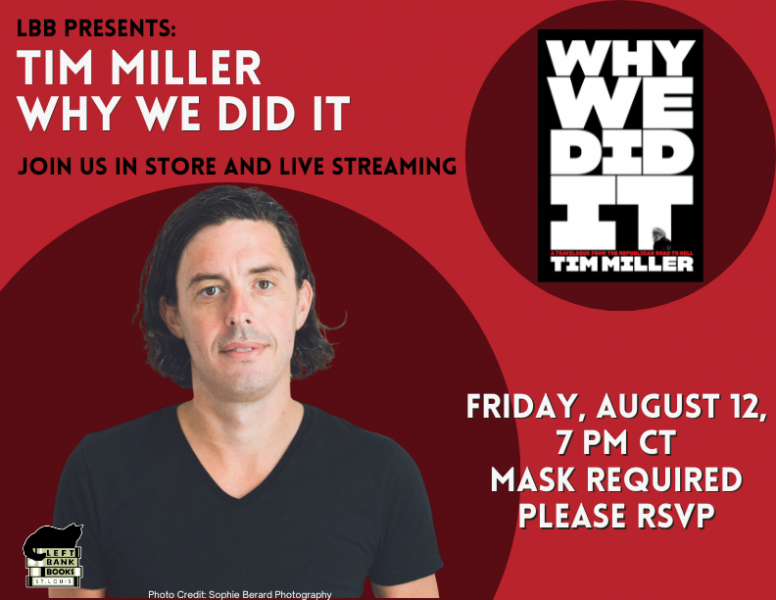 Left Bank Books welcomes former Republican strategist and NY Times bestselling author,
Tim Miller,
who will discuss his brutally honest tell all book
Why We Did It
in our store on August 12th at 7pm!
Miller will be in conversation with the host of ‘On Democracy’ podcast
Fred Wellman.
Join us in person in the store or our YouTube & Facebook Live Page.
Order a copy of
Why We Did It: A Travelogue from the Republican Road to Hell
from Left Bank Books to support authors and independent bookstores!
Miller will personalize and sign copies for sale from Left Bank Books.
If you are unable to make it in person, leave a personalization note in your order.
Tim Miller is an MSNBC analyst and writer-at-large at The Bulwark. He was the communications director for Jeb Bush's 2016 presidential campaign and the spokesman for the Republican National Committee during Mitt Romney's 2012 presidential campaign.
Fred Wellman is the former Executive Director of the Lincoln Project. He is the host of On Democracy podcast and the cofounder @beerhallproject. He is a Westpoint and Harvard graduate, and served in the Army as an aviator and public affairs officer for 22 years.

"From any dark experience springs something hopeful and good. In the Trump years, that bright side has been Tim and his compatriots who took up arms to fight the MAGA scourge. Before this book, I understood why the crazies and kooks went along with Trump, but now I fully grasp why smart, supposedly 'normal' Republicans did, too. Tim's observations are clear-eyed, wise, brutally honest, and darkly hilarious. Everyone should read this book, especially fellow Democrats who want to better understand our political foes." -- James Carville

"Tim is a supremely gifted storyteller who writes with brutal honesty and stylish gallows humor about the GOP's toxic mix of opportunists, joy riders, and grifters who enabled Donald Trump's rise and guaranteed his enduring grip on the Republican Party. Tim takes a scalpel to the malignant tumor smothering American democracy by dissecting his own friends and onetime colleagues. The most valuable contribution of Tim's book may be the anthropological examination of just how little separates a 'normal' Republican from an activist working to overthrow a free and fair presidential election." -- Nicolle Wallace

"Tim's smart and witty takes on the current madness of our political times has been my balm of Gilead. In this book, Tim examines what makes some people abandon their principles to align with the current center of power and what makes others hold fast to their convictions in spite of finding themselves suddenly on the outs. As a former Republican partisan, Tim breaks it all down in precise bombs of truth and keen insight into some of the more awful truths of human nature when it comes to the allure of power." -- Jane Lynch

"Mea culpa and tell-all, Tim Miller's Why We Did It reveals why and how a generation of Republican politicos bent the knee to a president so many of them privately feared and despised." -- David Frum

Former Republican political operative Tim Miller answers the question no one else has fully grappled with: Why did normal people go along with the worst of Trumpism?

As one of the strategists behind the famous 2012 RNC "autopsy," Miller conducts his own forensic study on the pungent carcass of the party he used to love, cutting into all the hubris, ambition, idiocy, desperation, and self-deception for everyone to see. In a bracingly honest reflection on both his own past work for the Republican Party and the contortions of his former peers in the GOP establishment, Miller draws a straight line between the actions of the 2000s GOP to the Republican political class's Trumpian takeover, including the horrors of January 6th.

From ruminations on the mental jujitsu that allowed him as a gay man to justify becoming a hitman for homophobes, to astonishingly raw interviews with former colleagues who jumped on the Trump Train, Miller diagrams the flattering and delusional stories GOP operatives tell themselves so they can sleep at night. With a humorous touch he reveals Reince Priebus' neediness, Sean Spicer's desperation, Elise Stefanik and Chris Christie's raw ambition, and his close friends' submission to a MAGA psychosis.

Why We Did It is a vital, darkly satirical warning that all the narcissistic justifications that got us to this place still thrive within the Republican party, which means they will continue to make the same mistakes and political calculations that got us here, with disastrous consequences for the nation.

You can watch live on Left Bank's YouTube channel. To participate on Facebook, log in to your personal Facebook account, go to Left Bank Books' Facebook Live Page and wait for the livestream to begin on the page (you may need to refresh the page periodically until the stream begins). You can watch on either location without logging in, but in order to comment or interact with the program, you must be logged in.

Why We Did It: A Travelogue from the Republican Road to Hell (Hardcover)