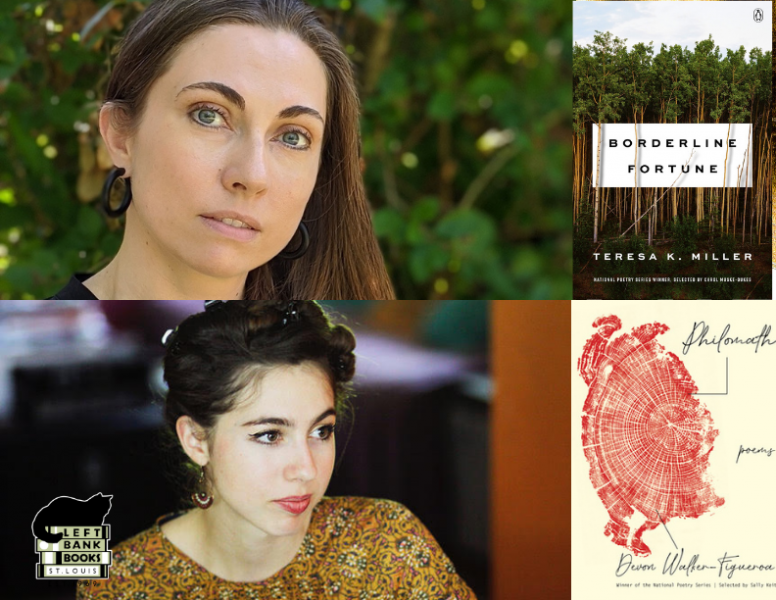 A collection that explores inherited trauma on an individual and communal level, from a National Poetry Series-winning poet who "refus[es] the mind's limits" (Carol Muske-Dukes)

Borderline Fortune is a meditation on intangible family inheritance--of unresolved intergenerational conflicts and traumas in particular--set against the backdrop of our planetary inheritance as humans. As species go extinct and glaciers melt, Teresa K. Miller asks what we owe one another and what it means to echo one's ancestors' grief and fear. Drawing on her family history, from her great-grandfather's experience as a schoolteacher on an island in the Bering Strait to her father's untimely death, as well as her pursuit of regenerative horticulture, Miller seeks through these beautifully crafted poems to awaken from the intergenerational trance and bear witness to our current moment with clarity and attention.

"Miller will be a new and invigorating voice, fully conversant with the ambiguities of our present day." --Library Journal

"Teresa K. Miller explores startling territories in Borderline Fortune. She addresses the lines we've drawn and erased for centuries on the earth--that conform to the borders we cross and uncross in the mind. Yet: 'I'm asking you to believe in what you've never seen or heard, ' she writes, refusing the mind's limits. Here is the dark power of climate change where she finds 'the future all danger, heat, & scarcity.' Blake, Dickinson, and Hopkins' Terrible Sonnets hover ('birds build--but not I build'), above trees cut down and hope with feathers. The damage done to the earth echoes the damages to the protean mind of the poet--but Miller remains radiantly elusive, an escape artist in these marvelous poems of altered terra firma and revelation." --Carol Muske-Dukes, author of Blue Rose

"In Borderline Fortune, Teresa K. Miller claws her way to and through her subject--loss in the form of 'shrapnel and good intention.' Awareness: It's a hard journey. The human voice calls in ragged gasps, how did we get here? But unlike Rumi who blithely says, 'Whoever brought me here will have to take me home, ' Miller's voice has been dragged to this shore and pressed under. To write is to imagine, and Miller discovers in the going, in the moment when we remember that 'every river had a first day to flow.' Through Miller's poems, we are given that first day, no matter what comes after. We find hope for another way of being in the world." --David Romtvedt, National Poetry Series-winning author of A Flower Whose Name I Do Not Know and Dilemmas of the Angels

Selected by Sally Keith as a winner of the 2020 National Poetry Series, this debut collection is a ruminative catalogue of overgrowth and the places that haunt us.

With Devon Walker-Figueroa as our Virgil, we begin in the collection's eponymous town of Philomath, Oregon. We drift through the general store, into the Nazarene Church, past people plucking at the brambles of a place that won't let them go. We move beyond the town into fields and farmland--and further still, along highways, into a cursed Californian town, a museum in Florence. We wander with a kind of animal logic, like a beast with "a mind to get loose / from a valley fallowing / towards foul," through the tense, overlapping space between movement and stillness.

An explorer at the edge of the sublime, Walker-Figueroa writes in quiet awe of nature, of memory, and of a beauty that is "merely existence carrying on and carrying on." In her wanderings, she guides readers toward a kind of witness that doesn't flinch from the bleak or bizarre: A vineyard engulfed in flames is reclaimed by the fields. A sow smothers its young, then bears more. A neighbor chews locusts in his yard.

For in Philomath, it is the poet's (sometimes reluctant) obligation "to keep an eye / on what is left" of the people and places that have impacted us. And there is always something left, whether it is the smell of burnt grapes, a twelfth-century bronze, or even a lock of hair.

"In Philomath, Devon Walker-Figueroa, with rare insight, writes an America so absolutely American it has been forgotten by America, an America so American one can't believe it exists unless one has lived there, and if one has lived there one recognizes it everywhere. Walker-Figueroa sees not only beyond our ideas about ourselves, but all the way to us being ourselves. Hers are the truest poems being written."-- Shane McCrae

"Devon Walker-Figueroa is that rare being--a poet who is both a brilliantly heartrending lyricist and a scathingly precise portraitist; a poet who experiments with the forms of verse, and a natural-born storyteller whose sympathy for the vividly rendered residents of Philomath recalls the Tilbury Town of Edwin Arlington Robinson and the Winesburg, Ohio of Sherwood Anderson. This is poetry throwing off sparks with the élan of Ai, Raymond Carver, and Sharon Olds--though Walker-Figueroa is a totally original voice."-- Joyce Carol Oates

"This is 'the sound of becoming, ' 'every you also/ a me.' This is the haunted Northwest, its 'trespasses/ unwittingly made.' This is the poet who knows all about 'a harp with forty strings of gut/ and one of gold, ' who has turned that harp from agony to harmony with the songs of her childhood and teens. These are the steers and the steering and the wrong turns and the turnings of a verse so modern that its reverses point into the future and all the way back past The Mill on the Floss; these are the memories, the parables, 'the closest/ you can get to civilization out here, ' as if we did not have to civilize ourselves, as if this poet and her music could not take us 'Out of Body, ' out of the ghost town called Bodie, out of a scary family history, out of martyrdom, out of time. It's a tome against self-erasure, for recollection, for staying and moving on and even thriving where so many have already fallen." --Stephanie Burt

Teresa K. Miller won the 2020 National Poetry Series with Borderline Fortune(Penguin, 2021), having previously placed as a finalist with two other manuscripts. A graduate of Barnard College and the Mills College MFA program, she is the author of sped (Sidebrow, 2013) and Forever No Lo (Tarpaulin Sky, 2008) as well as co-editor of Food First: Selected Writings from 40 Years of Movement Building (Food First Books, 2015). Her poems and essays have appeared in ZYZZYVA, AlterNet, Entropy, DIAGRAM, Common Dreams, Empty Mirror, and elsewhere. Originally from Seattle, she spent three years as a writer-in-residence at San Francisco’s Sanchez Grotto Annex and now tends a mini orchard near Portland, Oregon.

Devon Walker-Figueroa is the author of Philomath, selected for the 2020 National Poetry Series by Sally Keith. Originally from Kings Valley, a ghost town in the Oregon Coast Range, she is a graduate of the Iowa Writers' Workshop and the 2018 recipient of the New England Review's Emerging Writer Award. Her poems have appeared in such publications as The Nation, POETRY, the American Poetry Review, Lana Turner, and Ploughshares.