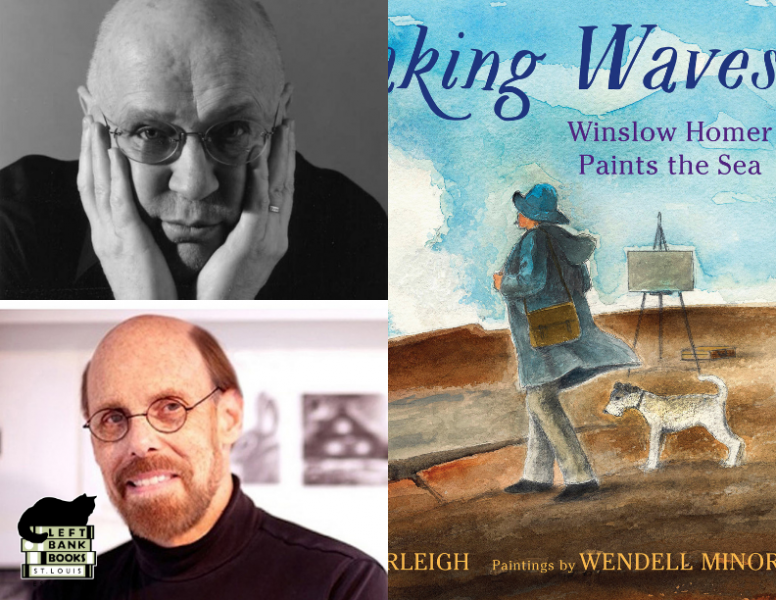 Left Bank Books is excited to present another Virtual Celebrity Storytime!
We welcome award winning author
Robert Burleigh &
award winning illustrator
Wendell Minor,
who will read aloud and talk about how they made their new picture book,
Breaking Waves: Winslow Homer Paints the Sea,
on Facebook Live at 11am CT on June 14.
Join us on our Facebook Page and order a copy of
Breaking Waves
from Left Bank Books to support authors and independent bookstores!

When Winslow Homer watches the sea, he studies it patiently, making sure to notice every detail before bringing it to life again in his paintings.

The fabled painter Winslow Homer always had a deep respect for the elemental power and beauty of the ever-changing ocean. Whenever he set up his easel, he was drawn back to its frothing waves smashing against rocks, gleaming like mirrors in the sunlight. He knew it took patience to get his painting just right to capture the life of the ocean.

Breaking Waves: Winslow Homer Paints the Sea describes the artist's process from season to season, readers are shown the many blues, greys, browns, and golds that Winslow Homer used to depict the changing sea. Additional content in the back of the book further explains his work and passion for the ocean.

★ The watercolor and pencil illustrations are beautiful and capture the different feelings the sea can conjure. The images are at times calm and peaceful and at times thrilling and dangerous. These illustrations are reason enough to add this book to collections but, in addition to the gorgeous visuals, this work is rich with sensory language. . . . A beautiful and rich work of literary nonfiction. --School Library Journal, Starred Review

Burleigh lyrically cycles through the seasons and the sea's changing moods as perceived by the artist Winslow Homer (1836-1910), punctuated by direct quotes from the artist, presented in italics. Throughout, Burleigh focuses on Homer's creative process, repeating the imperative 'Look!'-- a clue to Homer's faith in acute and careful observation, and a cue to the reader to engage with Minor's watercolor and gouache illustrations. Minor's realistic depictions of Homer's spare and tidy domestic world and prim suiting situate the story in time, while the looser, more expressive evocations of the untamed Maine coastline evoke place. The closing section, dotted with exclamations and painting reproductions, fills in biographical details. A solid introduction to a major American artist. --Publishers Weekly

Robert Burleigh is the award-winning author of many books for children, including The Adventures of Mark Twain by Huckleberry Finn, illustrated by Barry Blitt; Night Flight, illustrated by Wendell Minor; Black Whiteness, illustrated by Walter Lyon Krudop; and Sylvia's Bookshop, illustrated by Katy Wu. His many other books include Hoops; Stealing Home; and Clang! Clang! Beep! Beep! He lives in Michigan.

Wendell Minor is the illustrator of many award-winning picture books for children, including Edward Hopper Paints His World with Robert Burleigh as well as Wild Orca by Brenda Peterson and the New York Times-bestselling Reaching for the Moon by Buzz Aldrin. He lives in Washington, Connecticut.

The Adventures of Mark Twain by Huckleberry Finn (Hardcover)