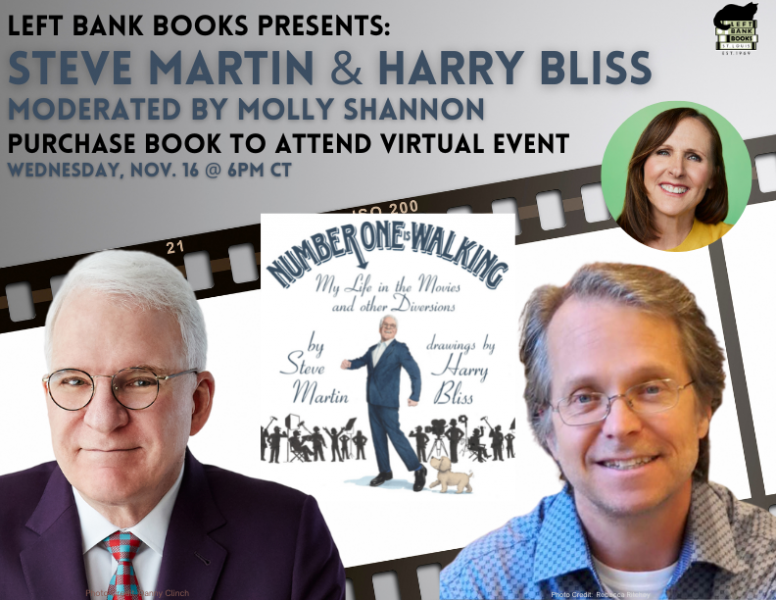 Join multi-talented comedian
Steve Martin
and heralded New Yorker cartoonist
Harry Bliss
to discuss their new illustrated book,
Number One Is Walking: My Life in the Movies and Other Diversions.
They will discuss Steve’s legendary career—his forty years in the movie biz,
as well as his stand-up comedy, banjo playing, writing, and cartooning.
Joining us to lead the conversation is legendary actress and author
Molly Shannon!

Ticket bundles include a copy of Number One is Walking and an emailed link to attend the event from Left Bank Books. Please expect your link prior to the event and ensure your email address is correct when purchasing your book and ticket.

Please contact Left Bank Books in the event you do not receive your join link.

PRAISE FOR NUMBER ONE IS WALKING
"Irresistibly charming...Film buffs, comedy fans, and legion admirers of both the actor and artist will find themselves smiling from cover to cover." —Publishers Weekly, *starred review
"A diverting interlude with two exceptionally clever souls." —Kirkus Reviews
ABOUT NUMBER ONE IS WALKING:
Number One Is Walking is Steve Martin’s cinematic legacy—an illustrated memoir of his legendary acting career, with stories from his most popular films and artwork by New Yorker cartoonist Harry Bliss.
Steve Martin has never written about his career in the movies before. In Number One Is Walking, he shares anecdotes from the sets of his beloved films—Father of the Bride, Roxanne, The Jerk, Three Amigos, and many more—bringing readers directly into his world. He shares charming tales of antics, moments of inspiration, and exploits with the likes of Paul McCartney, Diane Keaton, Robin Williams, and Chevy Chase. Martin details his forty years in the movie biz, as well as his stand-up comedy, banjo playing, writing, and cartooning, all with his unparalleled wit.
With gorgeously illustrated cartoons and single-panel “diversions” in Steve and Harry’s signature style, Number One Is Walking is full of the everyday moments that make up a movie star’s life, capturing Steve Martin’s singular humor and acclaimed career in film. The perfect gift from the team who brought you the #1 New York Times bestseller A Wealth of Pigeons.
ABOUT STEVE MARTIN:
Steve Martin is one of the most well-known talents in entertainment. His work has earned him an Academy Award®, five Grammy® awards, an Emmy®, the Mark Twain Award, and the Kennedy Center Honors.
As an author, Martin’s work includes the novel An Object of Beauty, the play Picasso at the Lapin Agile, a collection of comic pieces, Pure Drivel, a bestselling novella, Shopgirl, and his memoir Born Standing Up. Martin’s films include The Jerk, Planes, Trains & Automobiles, Roxanne, Parenthood, L.A. Story, Father of the Bride, and Bowfinger.
ABOUT HARRY BLISS:
Harry Bliss is a cartoonist and cover artist for the New Yorker magazine. His syndicated single-panel comic ‘Bliss’ appears in newspapers internationally. He has written and illustrated over 20 books for children and is the founder of the Cornish CCS Fellowship for Graphic Novelists in Cornish, New Hampshire.
ABOUT MOLLY SHANNON: 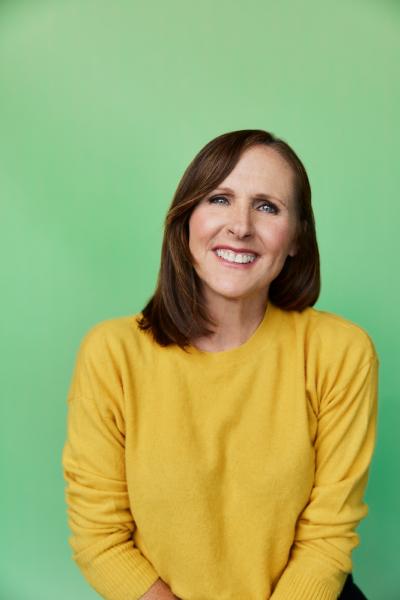 Molly Shannon is an actress and comedian. She spent six seasons as a member of the repertory company on Saturday Night Live, primarily known for the eclectic characters she created, such as Mary Katherine Gallagher and Sally O'Malley. In 2000, she received an Emmy nomination for Outstanding Individual Performance in a Variety or Music Program. In 2013, Molly received her second Emmy nomi-nation for Outstanding Guest Actress in a Comedy Series for her work in Enlightened and again in 2018 for her portrayal of Val in NBC's award-winning comedy Will & Grace. In 2017, she was awarded the Independent Spirit Award for Best Supporting Actress for her performance in the highly acclaimed drama Other People, written and directed by SNL head writer Chris Kelly. She was most recently seen in the Academy Award-nominated crime drama Promising Young Woman and will soon reprise her lauded performance on the critically acclaimed comedy The Other Two. Molly was born in Shaker Heights, Ohio. She earned a BFA in drama from New York University's prestigious Tisch School of the Arts. She currently lives in California with her husband and two children.
Event address:
Virtual Event - Ticket Purchase for Admission
Books:

Number One Is Walking: My Life in the Movies and Other Diversions (Hardcover)

A Wealth of Pigeons: A Cartoon Collection (Hardcover)