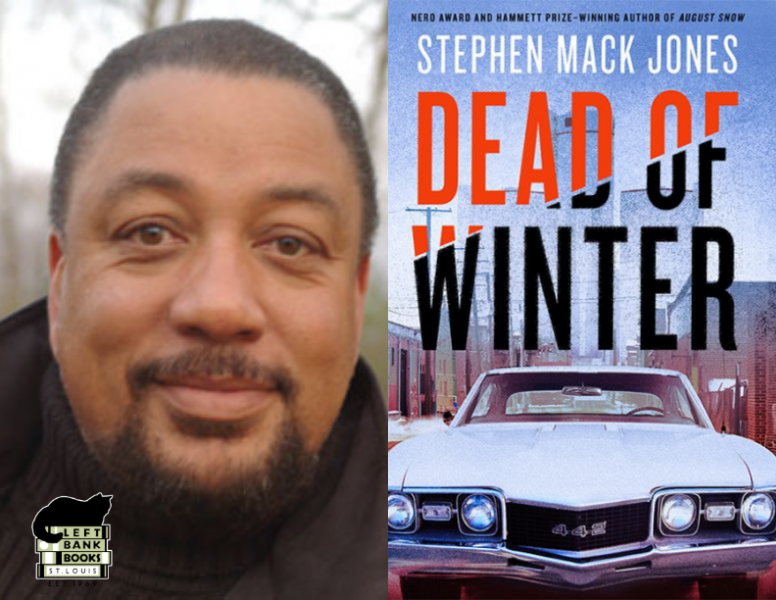 Left Bank Books welcomes award winning novelist and playwright
Stephen Mack Jones
who will discuss his new book,
Dead of Winter (August Snow Novel #3)
on Facebook Live at 7pm CT on May 6.
Join us on our Facebook Live Page and order copies of
Dead of Winter,
from Left Bank Books to support authors and independent bookstores!
About Dead of Winter
A shadowy Detroit real estate billionaire. A ruthless fixer. A successful Mexicantown family business in their crosshairs. Gentrification has never been bloodier.
Authentico Foods Inc. has been a part of Detroit's Mexicantown for over thirty years, grown from a home kitchen business to a city-blocklong facility that supplies Mexican tortillas to restaurants throughout the Midwest.
Detroit ex-cop and Mexicantown native August Snow has been invited for a business meeting at Authentico Foods. Its owner, Ronaldo Ochoa, is dying, and is being blackmailed into selling the company to an anonymous entity. Worried about his employees, Ochoa wants August to buy it. August has no interest in running a tortilla empire, but he does want to know who's threatening his neighborhood. Quickly, his investigation takes a devastating turn and he and his loved ones find themselves ensnared in a dangerous net of ruthless billionaire developers. August Snow must fight not only for his life, but for the soul of Mexicantown itself.
"Bebop and Norteño, cool jazz and salsa, reading Dead of Winter was like listening to all the good music. This latest by Stephen Mack Jones is an astounding composition, an ode to a diverse city known for big engines and bigger hearts. Welcome back, August Snow!"
--Rachel Howzell Hall, author of And Now She's Gone
"August Snow is a terrific character; rough and tumble, undaunted and implacably tenacious, his wit so sharp it'll make you bleed. In Stephen Mack Jones's new book, Dead of Winter, Snow protects his neighborhood from rapacious one percenters, Mack Jones skillfully weaving relevance into a blue streak, bone-breaking story. Highly, highly recommended."
--Joe Ide, author of the IQ Series
"Like Walter Mosley and Joe Ide, Jones builds a raucous and endearing cast of characters from his inner-city setting, fusing neighborhood camaraderie with streetwise know-how and head-banging action. This is a fine thriller in the grand hard-boiled tradition, but it's also a sensitive, multifaceted portrait of race in America."
--Booklist, Starred Review
About the Speaker
Stephen Mack Jones is a published poet, an award-winning playwright, and a recipient of the prestigious Hammett Prize, Nero Award, and the Kresge Arts in Detroit Literary Fellowship. He was born in Lansing, Michigan, and currently lives in the suburbs of Detroit. Dead of Winter is his third novel.
All you need to do to participate is log in to your personal Facebook account, go to Left Bank Books' Facebook Live Page, and wait for the livestream to begin on the page (you may need to refresh the page periodically until the stream begins). You may also watch the simulcast on Left Bank's YouTube channel.
Thursday, May 6, 2021 - 7:00pm