Stacey Abrams - Our Time is Now 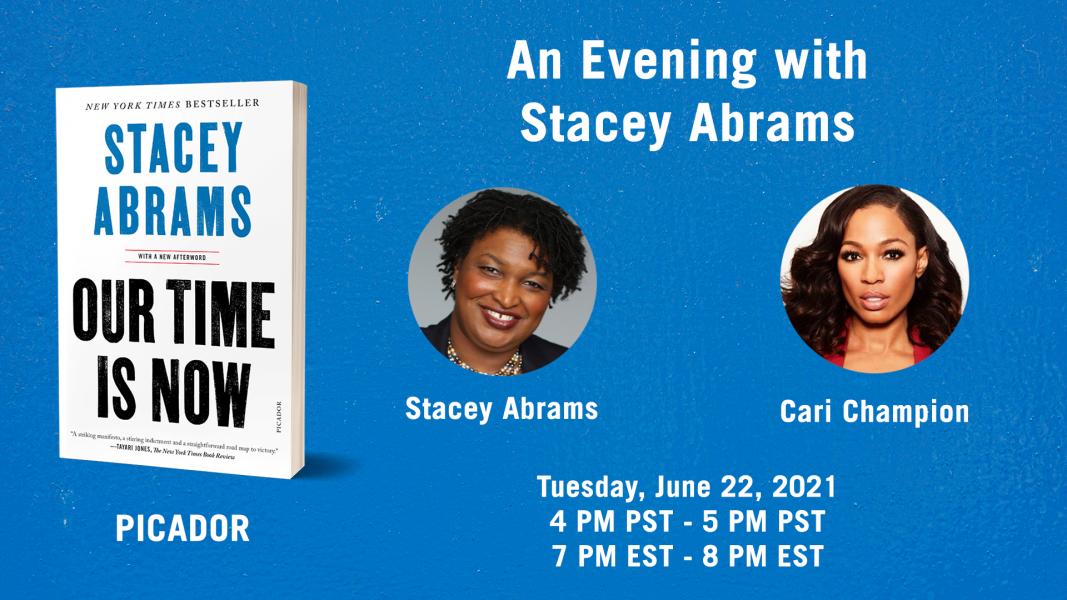 Picador and Left Bank Books are honored to present
“An Evening with Stacey Abrams”
to celebrate the paperback launch of the New York Times bestseller
OUR TIME IS NOW.
Stacey will be joined by
Cari Champion
on June 22 at 7 PM EST on Zoom Webinar
to discuss the urgency of ending voter suppression and how we can empower citizens to use their power to shape the future.
The conversation will be followed by moderated audience Q&A.
Bios:
Stacey Abrams is the New York Times bestselling author of Lead from the Outside, a serial entrepreneur, nonprofit CEO, and political leader. A tax attorney by training, she served eleven years in the Georgia House of Representatives, seven as Minority Leader, and Abrams became the 2018 Democratic nominee for Governor of Georgia, where she won more votes than any other Democrat in the state’s history. She has launched multiple organizations devoted to voting rights, training and hiring young people of color, and tackling social issues at the state, national and international levels. Abrams is a lifetime member of the Council on Foreign Relations and the 2012 recipient of the John F. Kennedy New Frontier Award. Abrams received degrees from Spelman College, the LBJ School of Public Affairs at the University of Texas, and Yale Law School. She is the founder of the New Georgia Project, Fair Fight Action, Fair Fight 2020, Fair Count, and the Southern Economic Advancement Project.
Cari Champion is a broadcast journalist and television personality based in Los Angeles. Champion made history with her move to Vice TV for her show “Cari & Jemele: Stick to Sports,” along with co-host Jemele Hill, as the first Black women to host a late-night cable news and information show. Champion also currently hosts the “NFL Next Live” Thursday Night Football live stream for Amazon, TNT’s studio show, “The Arena”, and recently returned as co-host for Season 2 of NBC’s reality competition series, “The Titan Games."Champion previously served as anchor and host at ESPN where she spent nearly a decade. She continues to break barriers, paving the way for younger women of color who want to pursue a career in sports television and other areas within broadcasting.
About OUR TIME IS NOW

From New York Times bestselling author of Lead From The Outside and political leader Stacey Abrams, a blueprint to end voter suppression, empower our citizens, and take back our country.

With each page, she inspires and empowers us to create systems that reflect a world in which all voices are heard and all people believe and feel that they matter. -- Kerry Washington

A recognized expert on fair voting and civic engagement, Abrams chronicles a chilling account of how the right to vote and the principle of democracy have been and continue to be under attack. Abrams would have been the first African American woman governor, but experienced these effects firsthand, despite running the most innovative race in modern politics as the Democratic nominee in Georgia. Abrams didn't win, but she has not conceded. The book compellingly argues for the importance of robust voter protections, an elevation of identity politics, engagement in the census, and a return to moral international leadership.

Our Time Is Now draws on extensive research from national organizations and renowned scholars, as well as anecdotes from her life and others' who have fought throughout our country's history for the power to be heard. The stakes could not be higher. Here are concrete solutions and inspiration to stand up for who we are now.

This is a narrative that describes the urgency that compels me and millions more to push for a different American story than the one being told today. It's a story that is one part danger, one part action, and all true. It's a story about how and why we fight for our democracy and win. - Stacey Abrams

A People Magazine Book of the Week

"Our Time Is Now is not a political memoir or a long-form résumé; rather, it is a striking manifesto, a stirring indictment and a straightforward road map to victory...She portrays her constituents and their concerns in such a way that they feel more actual than symbolic, more individual than indicative. When she turns her gaze onto her family, her narrative gifts are in full flower.--Tayari Jones, The New York Times Book Review

Stacey Abrams's powerful, deeply moving book shines a bright light on the ongoing attacks on the sacred, constitutional right to the ballot. Stacey provides everyday Americans and political leaders alike with the tools that are urgently needed to confront and defeat the forces that seek to deny Americans their voice in our democracy. The right to vote is the foundation of our freedom and a key pillar of our democracy, and we must all fight to ensure that all Americans have a say in their nation's future. --Nancy Pelosi, Speaker of the United States House of Representatives

From climate change to income inequality, voter suppression is threatening to undermine the most important issues facing our country today. This book is a must read for anyone who wants to see our democracy reflect the will of all people, and not just the will of America's most privileged. -- Issa Rae, writer and producer

Stacey Abrams is not only a passionate advocate of democracy, but also an inspiring example of how to practice it. In Our Time Is Now, she exposes systematic voter suppression efforts across America, and tells us what we need to do to fight back. This book is an essential toolkit for citizens of all backgrounds who believe, as I do, that democracy is not a spectator sport. -- Madeleine K. Albright, former United States Secretary of State

Following her historic run for Governor of Georgia in 2018, Stacey Abrams led a nationwide effort to empower and enfranchise voters to participate in our democratic process. With Our Time is Now, she's now set out a comprehensive roadmap for engaging those voters, tearing down barriers to participation, and making our democracy live up to its highest ideals. -- Julian Castro, former Secretary of Housing and Urban Development

Our Time Is Now: Power, Purpose, and the Fight for a Fair America (Paperback)