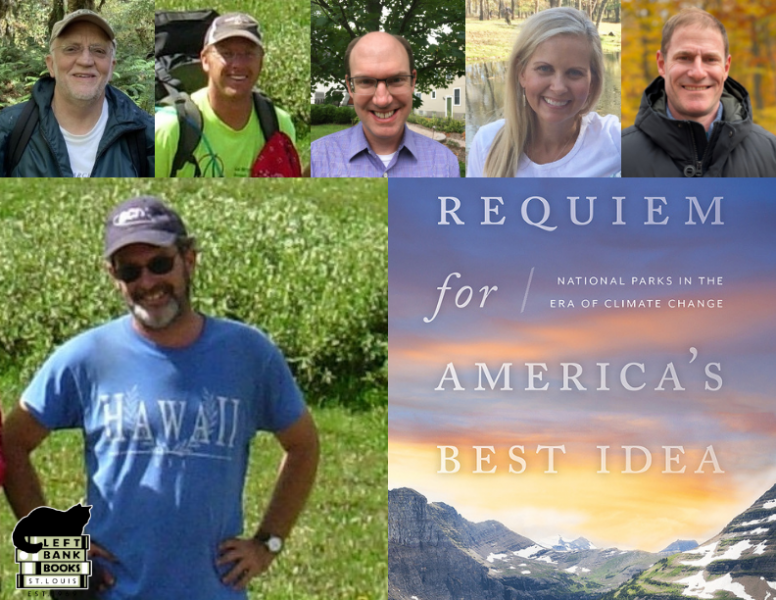 William Lowry is Emeritus Professor of Political Science at Washington University. Before going into academia, he served in the U.S. Navy, drove a taxi cab, worked for the National Park Service, and managed drug stores. He received his PhD in Political Science from Stanford University in 1988. He studied American politics, environmental and energy policy, and natural resource issues with focus on public lands. He is the author of five books as well as numerous articles and chapters in edited volumes. In 2010, he received a Distinguished Faculty Award from Washington University. Bill was a friend and former co-author with Mike. He oversaw publication of this book after Mike's passing.

Jim Yochim is the twin brother of Mike Yochim.  He was born and raised in the St. Louis area, graduating from Vianney High School and the University of Missouri, St. Louis.  He and his wife Nora are married for over 30 years and have one son and daughter-in-law living in Indiana.  He also has a 30+ year career with the federal government currently employed in the St. Louis area.  Jim has visited and hiked with Mike over the years at the several places he has lived including the Ozarks, Rhodes College in Memphis, TN, the University of Wisconsin, Yellowstone, Yosemite, and Sequoia/Kings Canyon national parks.  After Mike moved back to the St. Louis area after his ALS diagnosis, Jim enjoyed spending more time with his twin brother who always warmly greeted him on his visits despite the daily challenges he faced with ALS.

Brian Yochim, PhD, ABPP, is a board-certified neuropsychologist and a brother of author Mike Yochim. He has co-authored the books Psychology of Aging: A Biopsychosocial Perspective, Alzheimer’s Disease and Dementia, and the forthcoming book A Handbook of Geriatric Neuropsychology: Practice Essentials. He is a Fellow of the American Psychological Association. He hiked many miles with Mike Yochim, enjoyed many thought-provoking conversations with him, and assisted William Lowry in the completion of Mike’s book.

Dr. Eric Compas is a geographer who specializes in human-environment interactions, external threats to protected areas, and private land conservation. He has worked for the National Park Service in Yellowstone and has researched private-land development and conservation issues around the park. Currently a professor in the Geography, Geology and Environmental Studies Department at UW-Whitewater, he also taught in Australia and researched the establishment of new marine parks there. He’s a long-time friend, hiking companion, and colleague of Mike Yochim.

Michelle Reynolds Gray met Mike as a companion volunteer for people with ALS. Many hours together sorting through national park photos led to a best friendship and mentorship, as Mike taught Michelle the tricks and techniques of hiking and backpacking. Through his tutelage and the gift of his favorite camp stove and water filter, Michelle began a series of Hikes for Mike, sharing all her photos, videos, and experiences with him. She accompanied Mike on day trips to many local parks, and spent three afternoons a week with him the last five years of his life. This culminated in extensive planning of a trip to the Thorofare, Mike's favorite place. which was completed with a group of his friends as a memorial to Mike. Michelle owns a Cafe/Coffee shop in Bourbon, MO now, where she is perfectly situated to return to the woods and reconnect.

Washington University’s Environmental Studies program works to understand the systems that shape the Earth’s environment and how they influence the planet's diverse ecosystems, our natural resources, the communities we live in, and local and global political systems.

National Parks Conversation Association is the voice of America’s national parks, working to protect and preserve our nation’s most iconic and inspirational places for present and future generations. From the national headquarters in Washington, D.C., and 27 locations nationwide, NPCA calls on program and policy experts, committed volunteers, staff lobbyists, community organizers and communications specialists to inform and inspire the public and to influence decision makers to ensure that our national parks are well protected.

The St. Louis Regional Chapter of the ALS Association improves the lives of people living with ALS –the progressive neurodegenerative disease known as Lou Gehrig’s disease –in eastern Missouri and central and southern Illinois, through services and education.

About Requiem for America's Best Idea

In his enthusiastic explorations and fervent writing, Michael J. Yochim was to Yellowstone what Muir was to Yosemite. . . . Other times, his writing is like that of Edward Abbey, full of passion for the natural world and anger at those who are abusing it, writes foreword contributor William R. Lowry. In 2013 Yochim was diagnosed with ALS (Lou Gehrig's disease). While fighting the disease, he wrote Requiem for America's Best Idea. The book establishes a unique parallel between Yochim's personal struggle with a terminal illness and the impact climate change is having on the national parks--the treasured wilderness that he loved and to which he dedicated his life.

Yochim explains how climate change is already impacting the vegetation, wildlife, and the natural conditions in Olympic, Grand Canyon, Glacier, Yellowstone, and Yosemite National Parks. A poignant and thought-provoking work, Requiem for America's Best Idea investigates the interactions between people and nature and the world that can inspire and destroy them.

Michael J. Yochim (1966-2020) worked for twenty-two years at Yellowstone National Park as well as at Yosemite, Grand Canyon, and Sequoia. His books include Yellowstone and the Snowmobile: Locking Horns over National Park Use, A Week in Yellowstone's Thorofare: A Journey Through the Remotest Place, Essential Yellowstone: A Landscape of Memory and Wonder, and Protecting Yellowstone: Science and the Politics of National Park Management (UNM Press).

“Yochim writes thoughtfully and with incredible nuance regarding the state of the parks throughout their history…the sense that author and reader alike take some solace in the fresh telling of past tales is palpable. Readers will be glad to read of Yochim in his prime, while he relishes the opportunity to illuminate his beloved parks…This book highlights the beauty of the natural world and its status as an invaluable commodity that all humans share. Recommended for all nature enthusiasts.” –Library Journal (starred review)
“Yochim drew his last breath while writing this manuscript, using eye-tracking technology because, long before, he’d lost the ability to type or speak. While the disease devastated his body, Yochim’s memories of the parks sustained him…Requiem for America’s Best Idea is an exceptionally touching, persuasive, and urgent plea for preserving these “natural cathedrals”— places of wonder, renewal, and transcendence—for future generations.” –Foreword Reviews (starred review)
“This is a crucial book. So many people have connected to the larger world through these five iconic landscapes that they are the perfect way to get them to care about the biggest crisis threatening our future. Climate change is so huge it’s sometimes hard to see, but this fine book brings it very much down to earth—and some of the loveliest parts of that earth!” —Bill McKibben, author Wandering Home: A Long Walk Across America’s Most Hopeful Landscape
“What an amazing book.  Yochim manages to parallel the long-term destruction of our National Parks and wild lands – due to rising temperatures, receding glaciers, fire, and climate change in general – with his own physical decline due to the curse of ALS.  I have been to the places he remembers in this book, and I must say he reconstructs their beauty in ways few of us could.  This is truly a tragic work: The story of a man in his last moments alive holding onto a world of beauty that we are destroying.” –Kevin Mattson, Connor Study Professor of Contemporary History at Ohio University and author of We’re Not Here to Entertain
You can watch live on Left Bank's YouTube channel. To participate on Facebook, log in to your personal Facebook account, go to Left Bank Books' Facebook Live Page, and wait for the livestream to begin on the page (you may need to refresh the page periodically until the stream begins). You can watch on either location without logging in, but in order to comment or interact with the program, you must be logged in.
Virtual Event
Author Events
Featured
Books: