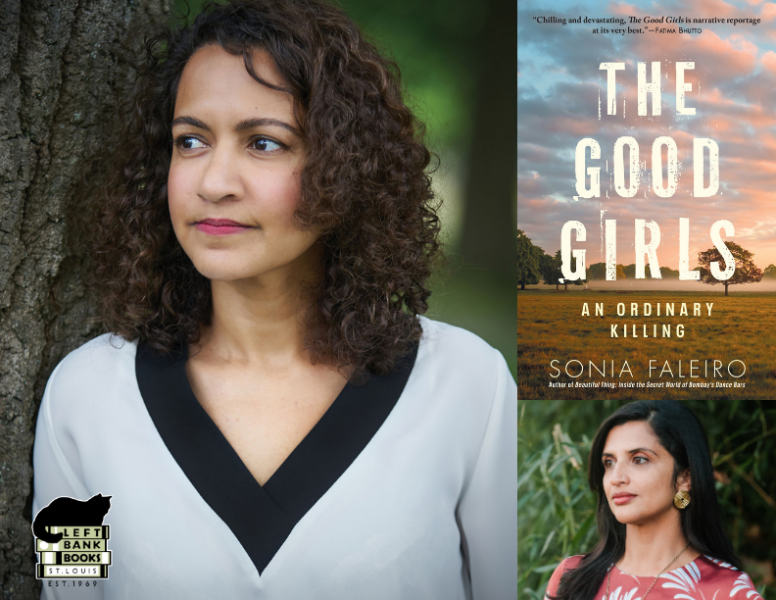 Left Bank Books welcomes international author
Sonia Faleiro,
who will discuss her new book,
The Good Girls: An Ordinary Killing,
on our Facebook Live Page at 1pm CT on March 8.
Faleiro will be in conversation with novelist
Tania James.
Join us on our Facebook Live Page and order a copy of
The Good Girls
from Left Bank Books to support authors and independent bookstores!

About The Good Girls

By the award-winning writer of Beautiful Thing, a masterly inquest into how the mysterious deaths of two teenage girls shone a light into the darkest corners of a nation.

The girls' names were Padma and Lalli, but they were so inseparable that people in the village called them Padma Lalli. Sixteen-year-old Padma sparked and burned. Fourteen-year-old Lalli was an incorrigible romantic.

They grew up in Katra Sadatganj, an eye-blink of a village in western Uttar Pradesh crammed into less than one square mile of land. It was out in the fields, in the middle of mango season, that the rumors started.

Then one night in the summer of 2014 the girls went missing; and hours later they were found hanging in the orchard. Who they were, and what had happened to them, was already less important than what their disappearance meant to the people left behind.

In the ensuing months, the investigation into their deaths would implode everything that their small community held to be true, and instigate a national conversation about sex and violence. Slipping deftly behind political maneuvering, caste systems and codes of honor in a village in northern India, The Good Girls returns to the scene of Padma and Lalli's short lives and shameful deaths, and dares to ask: what is the human cost of shame?

Sonia Faleiro is the author of Beautiful Thing: Inside the Secret World of Bombay's Dance Bars, which was named a book of the year by The Guardian, The Observer, The Sunday Times, NPR and The Economist, and a novella, The Girl. She is a co-founder of Deca, a cooperative of award-winning writers creating narrative journalism about the world. Her work has been supported by the Pulitzer Centre and The Investigative Fund, and appears in the New York Times, The Financial Times, Granta, 1843, The California Sunday Magazine, MIT Technology Review and Harper's. She lives in London.

Tania James is the author of three works of fiction, most recently the novel The Tusk That Did the Damage (Knopf). Tusk was named a Best Book of 2015 by The San Francisco Chronicle, The Guardian, and NPR, and shortlisted for the International Dylan Thomas Prize. Her short stories have appeared in Freeman’s Anthology, Granta, One Story, Oxford American, The New Yorker, and other venues. James is an associate professor at George Mason University, and lives in Washington DC.

The Tusk That Did the Damage (Vintage Contemporaries) (Paperback)