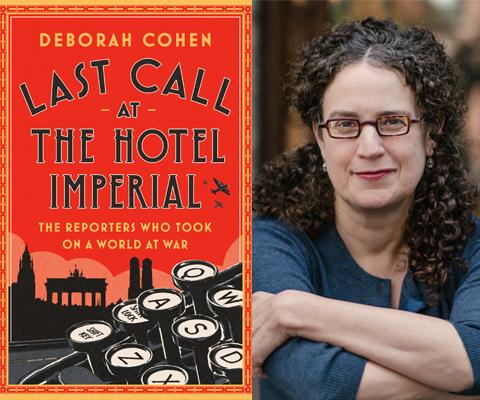 St. Louis County Library, HEC Media, and Left Bank Books present Award-Winning Historian Deborah Cohen, author of “Last Call at the Hotel Imperial: The Reporters Who Took on a World at War.”
Historian Deborah Cohen presents a revelatory account of a close-knit band of American reporters who, in the run-up to World War II, took on dictators and helped shape what Americans knew about the world. “Last Call at the Hotel Imperial” is the extraordinary story of John Gunther, H. R. Knickerbocker, Vincent Sheean, and Dorothy Thompson. As cub reporters in the 1920s, they roamed across a war-ravaged world.  Gutsy, glamorous, and irreverent to the bone, they chased deposed empresses, international financiers, and Balkan gun-runners, and then knocked back doubles late into the night. But as World War II raged, they could no longer separate themselves from the turmoil that surrounded them. To tell that story, they had to rewrite the rules of modern journalism.
Doors open at 6:00pm.
MASKS REQUIRED FOR ALL ATTENDEES.
Seating is limited; early arrival is recommended.
Books for signing will be available for purchase from Left Bank Books. Curbside pick-up, in-store pick-up, and shipping available.

Last Call at the Hotel Imperial: The Reporters Who Took On a World at War (Hardcover)