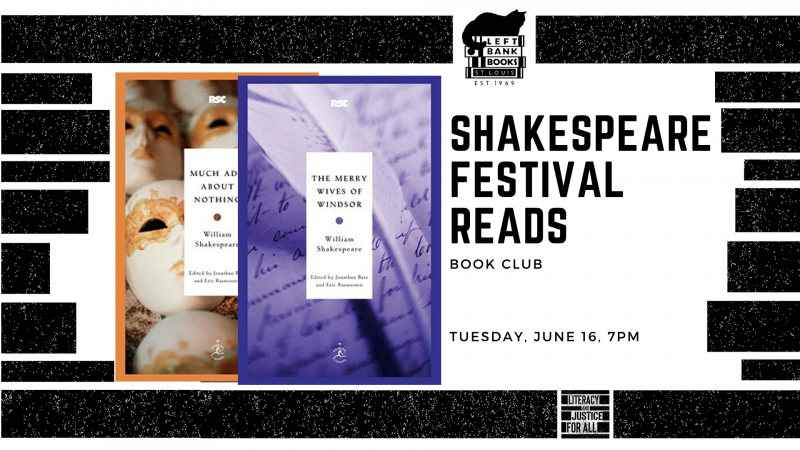 Join Shakespeare Festival Reads for a reading group discussion of The Merry Wives of Windsor and Much Ado About Nothing.

“Why, then the world’s mine oyster.”
—The Merry Wives of Windsor

Eminent Shakespearean scholars Jonathan Bate and Eric Rasmussen provide a fresh new edition of this popular comedy of love, laughter, and merriment—along with more than a hundred pages of exclusive features, including

• an original Introduction to The Merry Wives of Windsor
• incisive scene-by-scene synopsis and analysis with vital facts about the work
• commentary on past and current productions based on interviews with leading directors, actors, and designers
• photographs of key RSC productions
• an overview of Shakespeare’s theatrical career and chronology of his plays

Much Ado About Nothing

Set in a courtly world of masked revels and dances, this play turns on the archetypal story of a lady falsely accused of unfaithfulness, spurned by her bridegroom, and finally vindicated and reunited with him. Villainy, schemes, and deceits threaten to darken the brilliant humor and sparkling wordplay–but the hilarious counterplot of a warring couple, Beatrice and Benedick, steals the scene as the two are finally tricked into admitting their love for each other in Shakespeare’s superb comedy of manners.

Each Edition Includes:
• Comprehensive explanatory notes
• Vivid introductions and the most up-to-date scholarship
• Clear, modernized spelling and punctuation, enabling contemporary readers to understand the Elizabethan English
• Completely updated, detailed bibliographies and performance histories
• An interpretive essay on film adaptations of the play, along with an extensive filmography

Get The Merry Wives of Windsor and Much Ado About Nothing for 20% off by phone and online during the months of June and July!