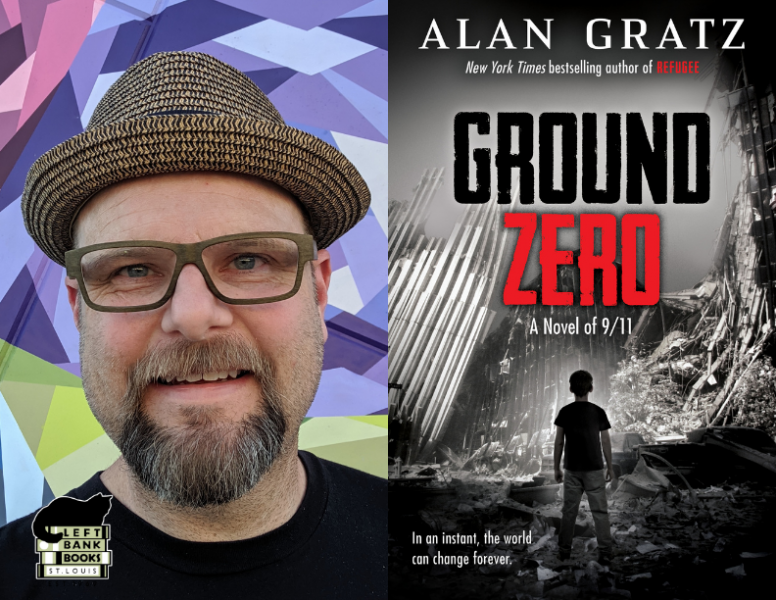 Left Bank Books welcomes bestselling author
Alan Gratz,
who will discuss his new middle grade novel,
Ground Zero,
in a special virtual visit to Missouri's schools and students on Crowdcast at 1:00pm CT on February 8.
Registration required to attend this free event.
Join us and order a copy of
Ground Zero
from Left Bank Books to support authors and independent bookstores!
Ground Zero is recommended for ages 9 to 12 (or Grades 4 to 7).

Any American adult can tell you where they were on 9/11. However, a new generation of Americans don’t have that memory. To them, the horrific events of that day are simply history.

In time for the twentieth anniversary of 9/11, master storyteller Alan Gratz (Refugee) delivers a pulse-pounding and unforgettable take on history and hope, revenge and fear -- and the stunning links between the past and present.

September 11, 2001, New York City: Brandon is visiting his dad at work, on the 107th floor of the World Trade Center. Out of nowhere, an airplane slams into the tower, creating a fiery nightmare of terror and confusion. And Brandon is in the middle of it all. Can he survive -- and escape?

September 11, 2019, Afghanistan: Reshmina has grown up in the shadow of war, but she dreams of peace and progress. When a battle erupts in her village, Reshmina stumbles upon a wounded American soldier named Taz. Should she help Taz -- and put herself and her family in mortal danger?

Two kids. One devastating day. Nothing will ever be the same.

Says Alan Gratz: “For all its horrors, 9/11 is also the story of people coming together to help one another in a time of crisis. And for all the death and destruction the war has brought to Afghanistan, it has also meant the end of the Taliban as the country’s official rulers, and more freedom for women and girls. GROUND ZERO explores these contradictions, highlighting how people are often at their best when the worst happens and how impossible it is to make the right decision when both outcomes are unacceptable. These are universal experiences that ignore nationality and religion and culture—challenges that unite us as human beings—and I believe that fiction helps young people understand these big, scary topics and empathize with the people enduring them.”

“The year 2021 will mark the twenty-year anniversary of 9/11. Will it also mark the twenty-year anniversary of the war in Afghanistan? Time will tell. One way or another, we still live in a world reshaped and redefined by what happened in those 102 frightful minutes on a bright blue September morning in 2001. It’s more important than ever to help new generations understand how we got from there to where we
are today.”

Alan Gratz is the New York Times bestselling author of several highly acclaimed books for young readers, including Allies, Grenade, Projekt 1065, Prisoner B-3087, and Code of Honor. His novel Refugee is often referred to as a modern classic, and has remained on The New York Times bestseller list for over two years. Alan lives in North Carolina with his wife and daughter. Look for him online at alangratz.com.

Ban This Book: A Novel (Paperback)