Following recommendations from the CDC, this event is now a virtual event on Sarah's Twitter platform on the same day, April 7 at 7pm. Sarah is offering live signing and personalization available with special orders. Details will be announced on Sarah's Twitter. 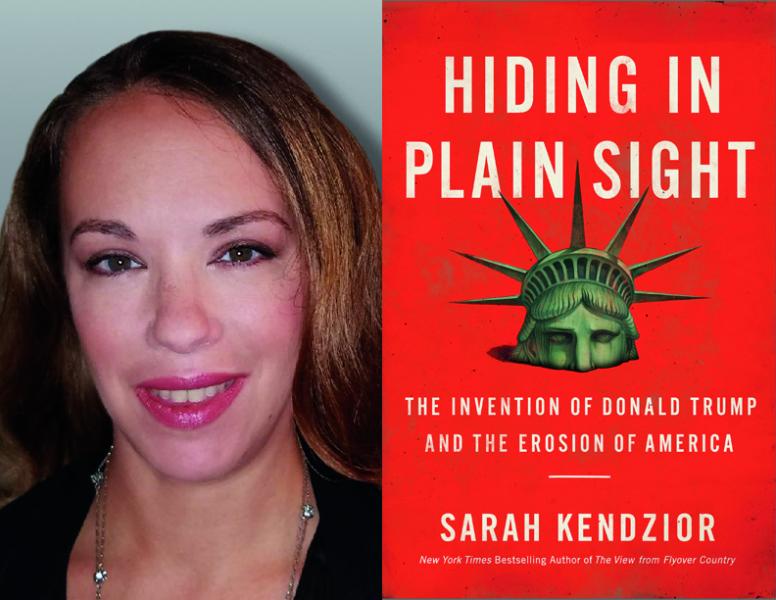 The rise of Donald Trump may have shocked Americans, but it should not have surprised them. His anti-democratic movement is the culmination of a decades-long breakdown of U.S. institutions. The same blindness to U.S. decline – particularly the loss of economic stability for the majority of the population and opportunity-hoarding by the few – is reflected in an unwillingness to accept that authoritarianism can indeed thrive in the so-called “home of the free”.

As Americans struggle to reconcile the gulf between a flagrant aspiring autocrat and the democratic precepts they had been told were sacred and immutable, the inherent fragility of American democracy has been revealed. Hiding in Plain Sight exposes this continual loss of freedom, the rise of consolidated corruption, and the secrets behind a burgeoning autocratic United States that have been hiding in plain sight for decades. In Kendzior’s signature and celebrated style, she expertly outlines Trump’s meteoric rise from the 1980s until today, interlinking key moments of his life with the degradation of the American political system and the continual erosion of our civil liberties by foreign powers.

Kendzior also offers a never-before-seen look at her personal life and her lifelong tendency to be in the wrong place at the wrong time – living in New York through 9/11 and in St. Louis during the Ferguson uprising, and researching media and authoritarianism when Trump emerged using the same tactics as the post-Soviet dictatorships she had long studied. Hiding in Plain Sight is about confronting injustice – an often agonizing process, but an honest and necessary one – as the only way that offers the possibility of ending it.

Sarah Kendzior is best known for her reporting on St. Louis and the 2016 election, her academic research on authoritarian states, and her New York Times bestselling debut The View from Flyover Country. She is an op-ed columnist for the Globe and Mail and was named one of Foreign Policy's “100 people you should be following on Twitter to make sense of global events.” Her reporting has been featured in Politico, The Atlantic, Fast Company, The New York Times, and more. She lives in St. Louis.

Hiding in Plain Sight: The Invention of Donald Trump and the Erosion of America (Hardcover)