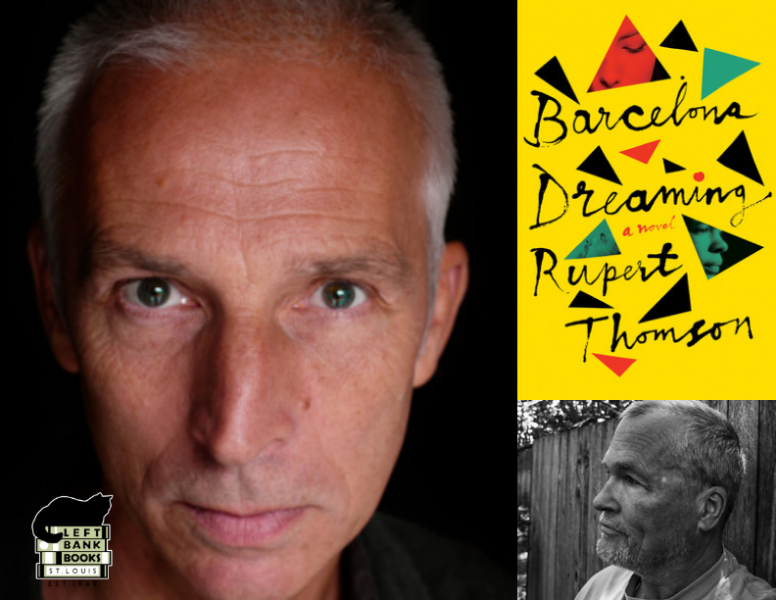 Left Bank Books welcomes highly acclaimed author
Rupert Thomson
who will discuss his new book,
Barcelona Dreaming
on Facebook Live at 1pm CT on June 3.
Thomson will be in conversation with St. Louis bestselling author
Scott Phillips.
Join us on our Facebook Live Page and order copies of
Barcelona Dreaming,
from Left Bank Books to support authors and independent bookstores!
About Barcelona Dreaming
Set on the eve of the financial crash of 2008, this evocative novel is made up of three stories linked by time and place, and also by the moving, unexpected interactions of a rich cast of characters.
Barcelona Dreaming is narrated, in turn, by an English woman who runs a gift shop, an alcoholic jazz pianist, and a translator tormented by unrequited love, all of whose lives will be changed forever. Underpinning the novel, and casting a long shadow, is a crime committed against a young Moroccan immigrant.
Exploring themes of addiction, racism, celebrity, immigration, and self-delusion, and fueled by a longing for the unattainable and a nostalgia for what is about to be lost, Barcelona Dreaming is a love letter to one of the world's most beautiful cities and a powerful and poignant fable for our uncertain times.
"[A] shimmering triptych...With seamless prose, Thomson affords an intimate glimpse into the three protagonists' hearts and minds...Descriptive flourishes, meanwhile, produce a consistent stream of wonderfully odd details...Thomson gracefully ties together themes of longing, love, and the inequities caused by age and race. The result is memorable and moving." -- Publishers Weekly (starred review)
"[Thomson] writes with a cleareyed compassion and never forces moments; everything in the novel feels organic. [He] inhabits the voices of his characters perfectly...[a] trip to Barcelona well worth taking...powerful." -- Kirkus Reviews (starred review)
"I don't know how Rupert Thomson does it. Each novel he writes is a new vision of a new world; he's the least predictable, the most surprising of writers. Barcelona Dreaming is set in that city, and it seems as if Thomson knows every corner of it, and every kind of human being who might live there. My astonishment is only surpassed by my admiration." --Philip Pullman, author of the bestselling His Dark Materials trilogy
"The three stories in Barcelona Dreaming are connected by ingeniously created threads, but also by a tone that is ironic, observant, alert to the complexity of the characters' motives and desires. The book is set in the modern city of Barcelona, its atmosphere invoked with intimate knowledge and a matchless sense of place." --Colm Tóibín, New York Times bestselling author of Brooklyn and The Master
"Elegant and electrifying. Thomson's prose is sparse, yet so highly charged that I couldn't stop reading. I love all his novels--but this one is my new favorite." --Andrea Wulf, author of The Invention of Nature

Rupert Thomson is the author of twelve highly acclaimed novels, including Katherine Carlyle; Secrecy; The Insult, which was short-listed for the Guardian Fiction Prize and selected by David Bowie as one of his 100 Must-Read Books of All Time; The Book of Revelation, which was made into a feature film by Ana Kokkinos; and Death of a Murderer, which was short-listed for the Costa Novel of the Year Award. His memoir, This Party's Got to Stop, was named Writers' Guild Non-Fiction Book of the Year. He lives in London.

Scott Phillips is a screenwriter, photographer and the author of seven novels and numerous short stories. His bestselling debut novel, The Ice Harvest, was a New York Times Notable Book and was adapted as a major motion picture starring John Cusack and Billy Bob Thornton. He won the California Book Award and was a finalist for the Edgar Award, the Hammett Prize, and the CWA Gold Dagger Award. Scott was born and raised in Wichita, Kansas, and lived for many years in France. He now lives with his wife and daughter in St. Louis, Missouri.

Never Anyone But You: A Novel (Paperback)

That Left Turn at Albuquerque (Paperback)