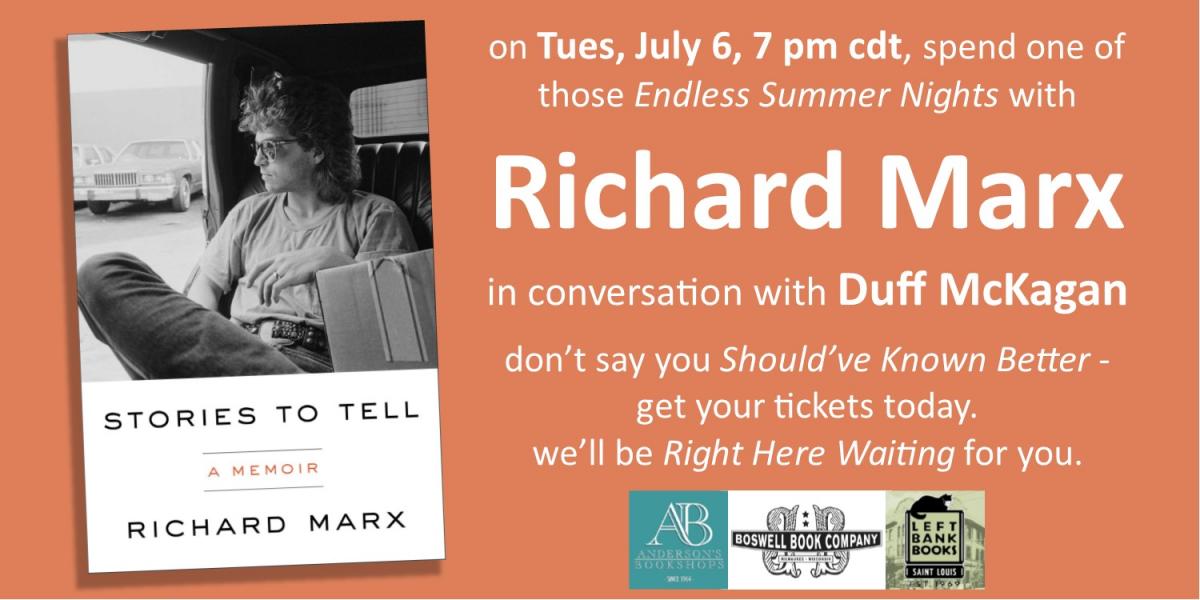 Left Bank Books, Anderson's Bookshop, and Boswell Books welcome triple-platinum selling singer/songwriter
Richard Marx,
who will discuss his new book
Stories to Tell: A Memoir,
on July 6th at 7pm CT in a private online event.
Marx will be in conversation with multi-instrumentalist, singer, songwriter and author of Guns N' Roses fame
Duff McKagan.
This is an exclusive event that requires purchase of a copy of
Stories to Tell
from Left Bank Books for admission.
Note: Ticket purchasers will receive the email with the link to join the private online event the DAY OF the event.

About Stories to Tell

Richard Marx is one of the most accomplished singer-songwriters in the history of popular music. His self-titled 1987 album went triple platinum and made him the first male solo artist (and second solo artist overall after Whitney Houston) to have four singles from their debut crack the top three on the Billboard Hot 100. His follow-up, 1989's Repeat Offender, was an even bigger smash, going quadruple platinum and landing two singles at number one. He has written fourteen number one songs in total, shared a Song of the Year Grammy with Luther Vandross, and collaborated with a variety of artists including NSYNC, Josh Groban, Natalie Cole, and Keith Urban. Lately, he's also become a Twitter celebrity thanks to his outspokenness on social issues and his ability to out-troll his trolls.

In Stories to Tell, Marx uses this same engaging, straight-talking style to look back on his life and career. He writes of how Kenny Rogers changed a single line of a song he'd written for him then asked for a 50% cut--which inspired Marx to write one of his biggest hits. He tells the uncanny story of how he wound up curled up on the couch of Olivia Newton-John, his childhood crush, watching Xanadu. He shares the tribulations of working with the all-female hair metal band Vixen and appearing in their video. Yet amid these entertaining celebrity encounters, Marx offers a more sobering assessment of the music business as he's experienced it over four decades--the challenges of navigating greedy executives and grueling tour schedules, and the rewards of connecting with thousands of fans at sold-out shows that make all the drama worthwhile. He also provides an illuminating look at his songwriting process and talks honestly about how his personal life has inspired his work, including finding love with wife Daisy Fuentes and the mystery illness that recently struck him--and that doctors haven't been able to solve.

Stories to Tell is a remarkably candid, wildly entertaining memoir about the art and business of music.

Richard Marx has sold more than 30 million albums worldwide over the course of his career. He is the only male artist whose first seven singles reached the Top 5 on the Billboard charts, and he has written on a number one single in each of the last four decades--an accolade previously only reached by Michael Jackson. He won a 2004 Song of the Year Grammy and has scored fourteen number-one singles, both as a performer and as a songwriter/producer. He is also a committed philanthropist, supporting charitable causes such as the American Cancer Society and the Ronald McDonald House Charities, Mercy For Animals, ASPCA, Humane Society, St. Jude Children's Research Hospital, and the charity closest to his heart, the Cystic Fibrosis Foundation. He lives in Malibu, California, with his wife, Daisy Fuentes.

Duff McKagan is one of the most recognized bassists in rock music history, best known as a founding member of the Guns N' Roses. McKagan has also become a prolific writer, as a five-year columnist for Seattle Weekly and stints as a weekly sports columnist for ESPN, as well as a financial columnist for Playboy.com. He has authored a bestselling autobiography "It's So Easy: and other lies," followed by his second book, "How to Be a Man: (and other illusions)." After attending Albers School of Business and Seattle University in his thirties, McKagan has established himself as a voice of business from within the music industry. Developing a reputation for financial knowledge, McKagan was highly sought after amongst other musicians for his advice on managing money. In 2011, McKagan partnered with investor Andy Bottomley to start Meridian Rock, with the aim of creating a capital management firm for musicians. McKagan resides with his wife Susan and two daughters, Grace and Mae, in Seattle, Washington.

You may purchase a copy of Stories to Tell: A Memoir from Left Bank Books online or by phone. You must provide an email address to be invited to the private online event. If you have purchased the book from Left Bank, you will receive an email event reminder a few days prior to the event. You will receive the email with the link to join the private online event the DAY OF the event.

Stories to Tell: A Memoir (Hardcover)