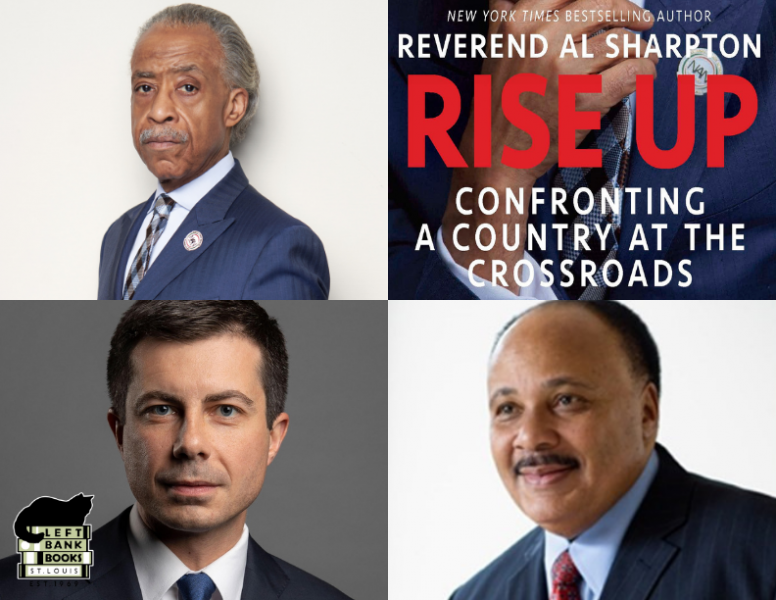 Left Bank Books welcomes renowned activist and speaker
Rev Al Sharpton,
who will discuss his new book,
Rise Up: Confronting a Country at the Crossroads,
on September 28 at 7pm CDT in a private online event.
Rev. Sharpton now will be in conversation with
Martin Luther King, III and Pete Buttigieg.
This is an exclusive event that requires EITHER a $5 ticket purchase or purchase of Rise Up from Left Bank Books for admission.

A rousing call to action for today's turbulent political moment, drawing on lessons learned from Reverend Sharpton's unique experience as a politician, television and radio host, and civil rights leader.

When the young Alfred Charles Sharpton told his mother he wanted to be a preacher, little did he know that his journey would also lead him to prominence as a politician, founder of the National Action Network, civil rights activist, and television and radio talk show host. His enduring ability and willingness to take on the political power structure makes him the preeminent voice for the modern era, a time unprecedented in its challenges.

In Rise Up, Reverend Sharpton revisits the highlights of the Obama administration, the 2016 election and Trump's subsequent hold on the GOP, and draws on his decades-long experience with other key players in politics and activism, including Shirley Chisholm, Hillary Clinton, Dr. Martin Luther King Jr. and more.

Beginning with a foreword by Michael Eric Dyson and closing with Rev. Sharpton's moving eulogy for George Floyd, Rise Up offers timeless lessons for anyone who's stood at the crossroads of their personal or political life, weighing their choices of how to proceed.

Rev. Al Sharpton is the host of MSNBC’s “PoliticsNation” and the founder and President of the National Action Network (NAN), one of the leading civil rights organization in the world. With over 40 years of experience as a community leader, politician, minister and advocate, the Rev. Al Sharpton is one of America’s most-renowned civil rights leaders. Sharpton also hosts the nationally syndicated radio show, “Keepin’ It Real”, which broadcasts in 40 markets, five days a week. He resides in New York.

Martin Luther King, III, the second child of Martin Luther King, Jr. and Coretta Scott King, has motivated audiences around the world with his insightful message of hope and civility. He has taken up the torch of his parents and continued the quest for equality and justice for all people. He has traveled extensively around the globe spreading the message of nonviolence and its role in resolving global, international, and cross-cultural conflicts. In addition to public service as an elected commissioner of Fulton County Georgia, Mr. King has served as the president of the Southern Christian Leadership Conference, also co-founded by his father, and the Martin Luther King, Jr. Center for Nonviolent Social change, founded by his mother after the assassination of his father. He has himself co-founded several organizations including Realizing the Dream, a nonprofit non-governmental organization that fosters nonviolent peace and development strategies.

Pete Buttigieg served two terms as mayor of South Bend, Indiana, and was a Democratic candidate for president of the United States in 2020. A graduate of Harvard University and a Rhodes Scholar at Oxford, Buttigieg served for seven years as an officer in the U.S. Navy Reserve, taking a leave of absence from the mayor’s office for a deployment to Afghanistan in 2014. In April 2019 he announced his candidacy for president and in February 2020 won the Iowa Caucuses, becoming the first openly gay person to ever win a presidential primary or caucus. He authored Shortest Way Home in 2019 and Trust: America's Best Chance, which comes out Oct 6, 2020.

You may purchase an $5 event ticket or a copy of Rise Up (which includes event admission) from Left Bank Books online through the button above. You must provide an email address to be invited to the private online event. If you have purchased a ticket (or a book), you will receive an email event reminder a few days prior to the event. You will receive the actual email invite to join the private online event on the DAY OF the event.