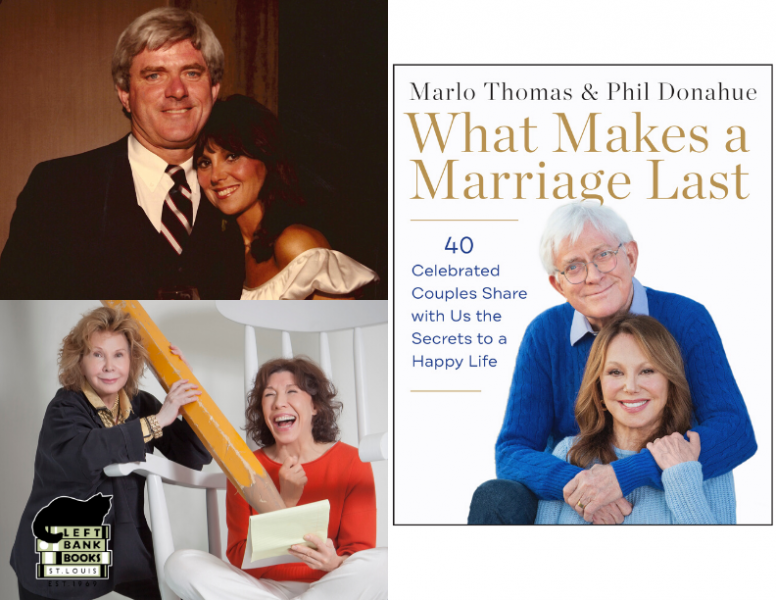 Left Bank Books and HEC Media welcome award-winning actress Marlo Thomas and media pioneer Phil Donahue, who will discuss their new book, What Makes a Marriage Last: 40 Celebrated Couples Share with Us the Secrets to a Happy Life, on July 30 at 6pm CDT in a private Facebook event. Thomas and Donahue will be in conversation with one of the book's featured couples, film and TV star Lily Tomlin and writer, director, and producer Jane Wagner. This is an exclusive event that requires purchase of What Makes a Marriage Last from Left Bank Books for admission.

Power couple Marlo Thomas and Phil Donahue have created a compelling and intimate collection of intriguing conversations with famous couples about their enduring marriages and how they have made them last through the challenges we all share.

What makes a marriage last? Who doesn’t want to know the answer to that question? To unlock this mystery, iconic couple Marlo Thomas and Phil Donahue crisscrossed the country and conducted intimate conversations with forty celebrated couples whose long marriages they’ve admired—from award-winning actors, athletes, and newsmakers to writers, comedians, musicians, and a former U.S. president and First Lady. Through these conversations, Marlo and Phil also revealed the rich journey of their own marriage.

What Makes a Marriage Last  offers practical and heartfelt wisdom for couples of all ages, and a rare glimpse into the lives of husbands and wives we have come to know and love. Marlo and Phil’s frequently funny, often touching, and always engaging conversations span the marital landscape—from that first rush of new love to keeping that precious spark alive, from navigating hard times to celebrating triumphs, from balancing work and play and family to growing better and stronger together. At once intimate, candid, revelatory, hilarious, instructive, and poignant, this book is a beautiful gift for couples of every age and stage.

“Delightful and instructive…Love and understanding shine through in this inspiring collection.”  — Publishers Weekly

Marlo Thomas is an award-winning actress, author, and activist whose body of work continues to impact American entertainment and culture. She has been honored with four Emmy Awards, the George Foster Peabody Award, a Golden Globe, a Grammy, and has been inducted into the Broadcasting Hall of Fame. In November 2014, President Barack Obama awarded Marlo the Presidential Medal of Freedom, the highest honor a civilian can receive.

Phil Donahue is a writer, producer, journalist, and media pioneer who revolutionized the talk show format and ushered in a new era of broadcast television. The Donahue show was honored with twenty Daytime Emmy Awards, including ten Emmys for Outstanding Host, and ten for Best Talk Show. In 1996, the Daytime Emmys presented Phil with a Lifetime Achievement Award for his contributions to television journalism. Phil has been inducted into the Academy of Television Arts & Sciences Hall of Fame and is a recipient of the George Foster Peabody Award. He lives in New York City.

Throughout her career, Lily Tomlin has received seven Emmys, two Tony Awards, a Grammy, two Peabody Awards, the prestigious Mark Twain Prize, and numerous other notable honors for her work in television and film. In 2014, Tomlin started filming the hit NetFlix comedy, Grace and Frankie, with Jane Fonda, which has become the longest-running NetFlix original series. On New Year’s Eve 2013, she married her long-time partner, Jane Wagner.

Jane Wagner, a distinguished American playwright, has won numerous awards, including two Peabody's, four Emmy's, a Writer's Guild Award for her work in television and the seldom-given NY Drama Critics' Circle Special Award for her Broadway success, The Search for Signs of Intelligent Life in the Universe. Wagner and Tomlin together founded the Goosebump Garden at the internationally known LGBT Fenway Health Center in Boston and have been involved in its growth for over 25 years. They have also founded the Los Angeles LGBT Center’s Lily Tomlin/Jane Wagner Cultural Arts Center.

You may purchase What Makes a Marriage Last from Left Bank Books online or over the phone, but you must provide an email address to be invited to the private Facebook event (a Facebook account will be needed to access this event). If you have purchased the book from Left Bank, you will receive an email event reminder a few days prior to the event. You will receive the actual email invite to join the private Facebook event, with the private group, on the DAY OF the event.

What Makes a Marriage Last: 40 Celebrated Couples Share with Us the Secrets to a Happy Life (Hardcover)