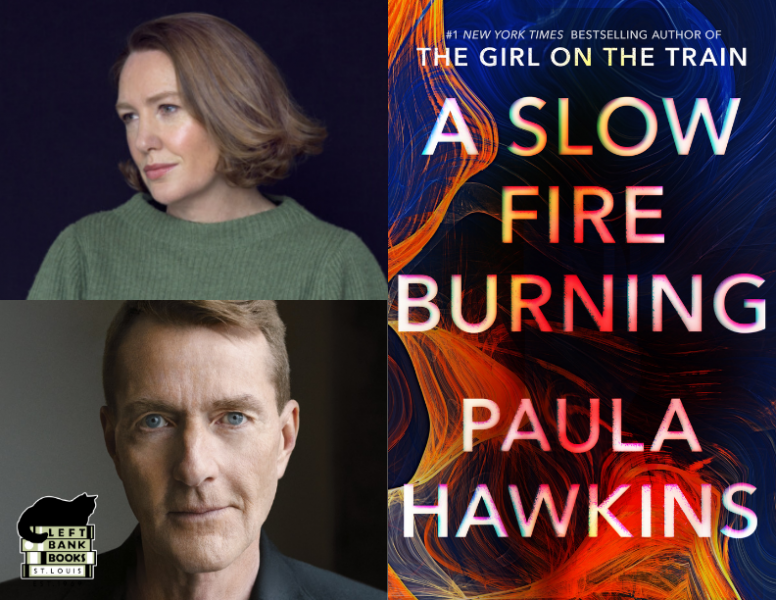 Left Bank Books, Murder by the Book, Watermark Books, and Riverhead Books welcome international bestselling author
Paula Hawkins,
who will discuss her new book
A Slow Fire Burning,
on August 28 at 1pm CT in a private online event.
Hawkins will be in conversation with international bestselling author
Lee Child.
This is an exclusive event that requires purchase of a SIGNED copy of
A Slow Fire Burning
from Left Bank Books for admission.
Note: Ticket purchasers will receive the email with the link to join the private online event the DAY OF the event.
Note: You may also order the unsigned large print for admission to the event.
About A Slow Fire Burning
The scorching new thriller from the #1 New York Times bestselling author of The Girl on the Train.

" A Slow Fire Burning twists and turns like a great thriller should, but it's also deep, intelligent and intensely human." - Lee Child

"Only a clairvoyant could anticipate the book's ending" - New York Times

When a young man is found gruesomely murdered in a London houseboat, it triggers questions about three women who knew him. Laura is the troubled one-night-stand last seen in the victim's home. Carla is his grief-stricken aunt, already mourning the recent death of yet another family member. And Miriam is the nosy neighbor clearly keeping secrets from the police. Three women with separate connections to the victim. Three women who are - for different reasons - simmering with resentment. Who are, whether they know it or not, burning to right the wrongs done to them. When it comes to revenge, even good people might be capable of terrible deeds. How far might any one of them go to find peace? How long can secrets smolder before they explode into flame?

Look what you started.

A Slow Fire Burning is a hugely satisfying, brilliantly crafted novel about the entanglement of betrayal and retaliation, the damage of loss, and how tragedy reverberates in ways we can never expect. Wickedly dark and gorgeously written, this is a novel you'll be thinking about long after the last delicious pages. Paula Hawkins is masterful. -- Ashley Audrain, New York Times bestselling author of The Push

With a beautifully wrought cast of characters who are real and likeable even when they are complicated and flawed, a fantastic, picturesque London setting, twists and turns galore and exquisite prose, this is a high class read. Paula Hawkins is a genius. --Lisa Jewell, New York Times bestselling author of The Family Upstairs

Paula Hawkins is the author of the #1 New York Times-bestselling novels Into the Water and The Girl on the Train. An international #1 bestseller, The Girl on the Train has sold 23 million copies worldwide and has been adapted into a major motion picture. Hawkins was born in Zimbabwe and now lives in London.

Lee Child is the author of twenty-five New York Times bestselling Jack Reacher thrillers, with sixteen having reached the #1 position, and the #1 bestselling complete Jack Reacher story collection, No Middle Name. Foreign rights in the Reacher series have sold in one hundred territories. A native of England and a former television director, Lee Child lives in New York City and Wyoming.

You may purchase a SIGNED copy of A Slow Fire Burning from Left Bank Books online or by phone. You must provide an email address to be invited to the private online event. If you have purchased the book from Left Bank, you will receive an email event reminder a few days prior to the event. You will receive the email with the link to join the private online event the DAY OF the event.

Into the Water: A Novel (Paperback)

The Girl on the Train: A Novel (Paperback)