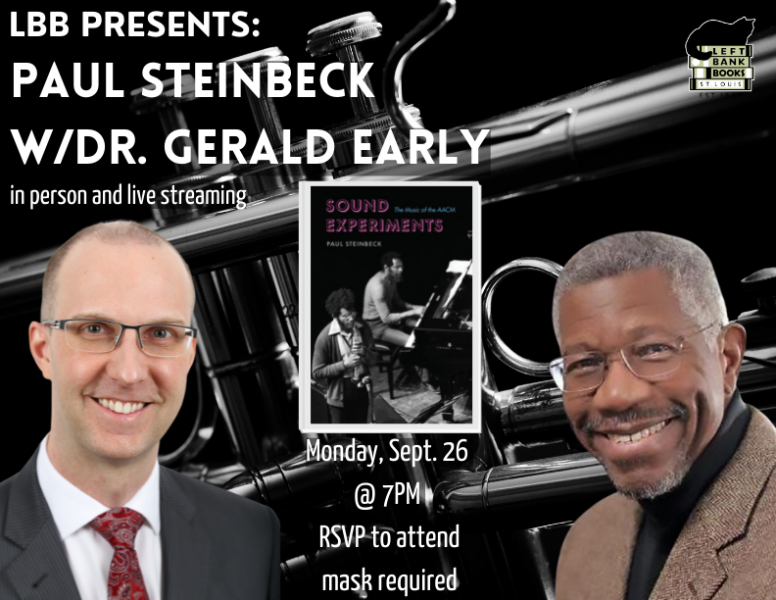 Left Bank Books welcomes associate professor of music at Washington University in St. Louis
Paul Steinbeck,
who will discuss the groundbreaking study of the trailblazing music of Chicago's AACM
Sound Experiments: The Music of the AACM
in our store on September 26th at 7pm!
Steinbeck will be in conversation with
Dr. Gerald Early.
Join us in person in the store or our YouTube & Facebook Live Page.
Order a copy of
Sound Experiments: The Music of the AACM
from Left Bank Books to support authors and independent bookstores!
Paul Steinbeck will personalize and sign copies for sale from Left Bank Books.
If you are unable to make it in person, leave a personalization note in your order.
Paul Steinbeck is associate professor of music at Washington University in St. Louis. He is the author of Message to Our Folks: The Art Ensemble of Chicago and coauthor of Exercises for the Creative Musician.
Gerald Early is Chair of African and African-American Studies and Professor of English at Washington University. He has written and edited numerous books, including This Is Where I Came In: Black America in the 1960s and The Culture of Bruising: Essays on Prizefighting, Literature, and Modern American Culture, which won the 1994 National Book Critics Circle Award for criticism.

A groundbreaking study of the trailblazing music of Chicago's AACM, a leader in the world of jazz and experimental music.

Founded on Chicago's South Side in 1965 and still thriving today, the Association for the Advancement of Creative Musicians (AACM) is the most influential collective organization in jazz and experimental music. In Sound Experiments, Paul Steinbeck offers an in-depth historical and musical investigation of the collective, analyzing individual performances and formal innovations in captivating detail. He pays particular attention to compositions by Muhal Richard Abrams and Roscoe Mitchell, the Association's leading figures, as well as Anthony Braxton, George Lewis (and his famous computer-music experiment, Voyager), Wadada Leo Smith, and Henry Threadgill, along with younger AACM members such as Mike Reed, Tomeka Reid, and Nicole Mitchell.

Sound Experiments represents a sonic history, spanning six decades, that affords insight not only into the individuals who created this music but also into an astonishing collective aesthetic. This aesthetic was uniquely grounded in nurturing communal ties across generations, as well as a commitment to experimentalism. The AACM's compositions broke down the barriers between jazz and experimental music and made essential contributions to African American expression more broadly. Steinbeck shows how the creators of these extraordinary pieces pioneered novel approaches to instrumentation, notation, conducting, musical form, and technology, creating new soundscapes in contemporary music.

Review Quotes:
"The Association for the Advancement of Creative Musicians has achieved worldwide recognition for its approaches to notated composition, improvisation, technology, and intermedia. Steinbeck's extensive historical and methodological analysis of a wide range of AACM musical practices makes this book indispensable to an understanding of the leading role of Afrodiasporic experimentalism in the past, present, and future of new music."--George Lewis

"Steinbeck has written an excellent analysis of the works of composers-performers from the AACM. A clear and concise investigative text, it looks into many aspects involved in creating a work of musical art. His writing is creative and has an expressive use of language. I recommend his book to everyone."--Wadada Leo Smith

"One of the most significant avant-garde collectives of the twentieth century, the Association for the Advancement of Creative Musicians (AACM) remains a powerful force in the early 21st century. In Paul Steinbeck, the AACM has found a chronicler and scholar of passion, erudition, and discipline, the very qualities that have made it such an enduring institution."--Adam Shatz

"I really appreciate Paul Steinbeck's scholarship in putting together Sound Experiments. I have always found him to be an engaging writer. I enjoy how he wrote about my compositions on my album Sound, as well as the different iterations of my composition Nonaah. He really dug deep!"--Roscoe Mitchell

"[Steinbeck] gives a good account of the cultural, social, political and economic contexts from which the music emerged, and is keenly aware of the racialised gatekeeping which has all too often kept AACM composers from getting their due. . . . Ultimately, the reader comes away with a greater appreciation of the AACM's achievements: Great Black Music, from Ancient to the Future." -- "The Wire"