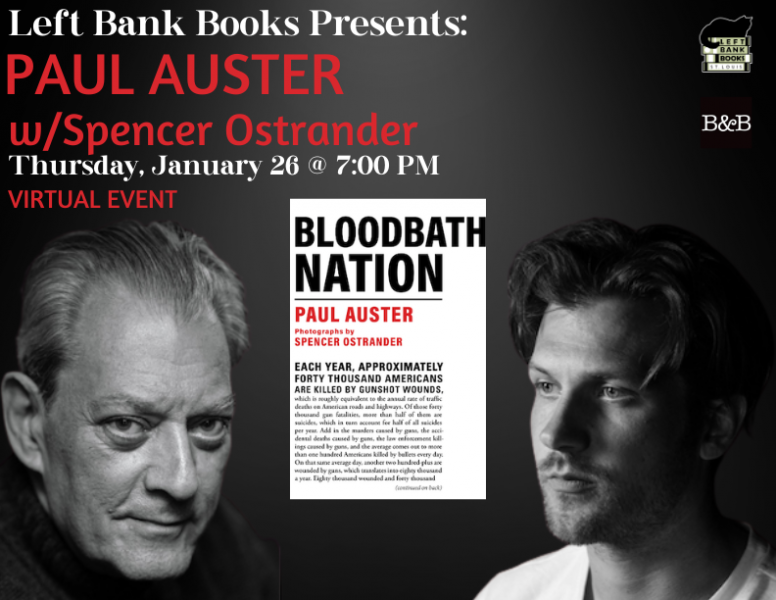 Left Bank Books and Books & Books with Miami Book Fair + independent bookstores welcome one of our greatest living writers,
Paul Auster,
for a special virtual event to celebrate the release the intimate and powerful rumination on American gun violence
Bloodbath Nation,
in an exclusive online event at 7pm CT / 8pm ET on Thursday, January 26th.
Photographer Spencer Ostrander
will be joining us for the discussion.
Order a copy of
Bloodbath Nation
from Left Bank Books to support authors and independent bookstores!
Registration for the event will allow you to access the event live and also watch a recording.

PAUL AUSTER is the bestselling author of 4 3 2 1, Sunset Park, The Book of Illusions, Moon Palace, and The New York Trilogy, among many other works. In 2006, he was awarded the Prince of Asturias Prize for Literature. His other honors include the Prix Médicis Étranger for Leviathan, the Independent Spirit Award for the screenplay of Smoke, the Los Angeles Times Book Prize for Burning Boy, and the Carlos Fuentes Prize for the body of his work. His most recent novel, 4 3 2 1, was shortlisted for the Man Booker Prize. He is a member of the American Academy of Arts and Letters and is a Commandeur de l'Ordre des Arts et des Lettres. His work has been translated into more than forty languages. He lives in Brooklyn, New York.

SPENCER OSTRANDER was born in Seattle in 1984 and has lived in New York City for the past two decades. He has done extensive work in all forms of photography and has recently completed two other book projects: Long Live King Kobe with text by Paul Auster and Times Square in the Rain.

A portion of proceeds from this book will be donated to the Violence Policy Center, a nonprofit organization working to stop gun death and injury through research, education, and advocacy.

BLOODBATH NATION is powerfully illustrated with over forty original black and white photographs of abandoned sites of mass shootings by Spencer Ostrander. A portion of the proceeds from this book will be donated to the Violence Policy Center, a non-profit organization working to stop gun death and injury through research, education, and advocacy.

Now, at this time of intense national discord, no issue divides Americans more deeply than the debate about guns. There are currently more guns than people in the United States, and every day more than one hundred Americans are killed by guns and another two hundred are wounded. These numbers are so large, so catastrophic, so disproportionate to what goes on elsewhere, that one must ask why. Why is America so different—and why are we the most violent country in the Western world?

In this short, searing book, Auster traces centuries of America’s use and abuse of guns, through the colonial prehistory of the Republic, armed conflict against the native population, the forced enslavement of millions, and the mass shootings that dominate the current news cycle. He examines the embattled gun-control and anti-gun-control camps, frames gun violence as a public health issue, and investigates the details of one horrific incident – including the perpetrator’s unchecked purchase of the gun he used and the suffering of a bystander-turned-hero.

Within just a few months after the book’s pages were finalized, we watched as twenty-one people were killed in an elementary school in Uvalde, Texas, ten in a grocery store in Buffalo, New York, and seven at a parade in Highland Park, Illinois. The tragedies are never-ending. Unflinching and urgent, BLOODBATH NATION asks: What kind of society do we want to live in?

Registrants will be added to the Books & Books' email list following the event and will begin to receive news about upcoming events and book recommendations. You may update your preferences or unsubscribe. We hope you will join us!

Burning Boy: The Life and Work of Stephen Crane (Paperback)