P. Djèlí Clark with Ann Leckie - A Master of Djinn 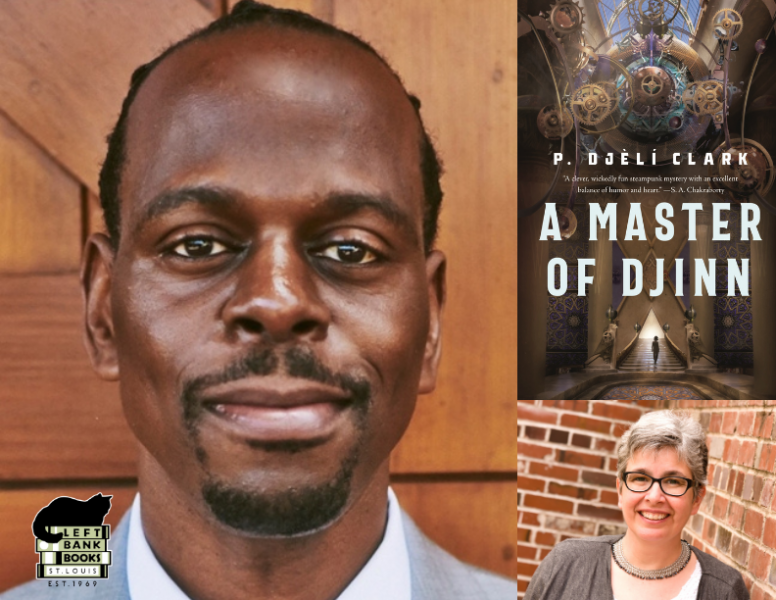 Left Bank Books welcomes award-winning author
P. Djèlí Clark,
who will discuss his new novel,
A Master of Djinn,
on our Facebook Live Page at 7pm CT on May 13.
Clark will be in conversation with award winning author
Ann Leckie.
Join us on our Facebook Live Page and order a SIGNED copy of
A Master of Djinn
from Left Bank Books to support authors and independent bookstores!

About A Master of Djinn

Cairo, 1912: Though Fatma el-Sha'arawi is the youngest woman working for the Ministry of Alchemy, Enchantments and Supernatural Entities, she's certainly not a rookie, especially after preventing the destruction of the universe last summer.

So when someone murders a secret brotherhood dedicated to one of the most famous men in history, al-Jahiz, Agent Fatma is called onto the case. Al-Jahiz transformed the world forty years ago when he opened up the veil between the magical and mundane realms, before vanishing into the unknown. This murderer claims to be al-Jahiz, returned to condemn the modern age for its social oppressions. His dangerous magical abilities instigate unrest in the streets of Cairo that threaten to spill over onto the global stage.

Alongside her Ministry colleagues and a familiar person from her past, Agent Fatma must unravel the mystery behind this imposter to restore peace to the city--or face the possibility he could be exactly who he seems...

A Master of Djinn is poised to launch P. Djèlí Clark's SFF career to new heights as the highly-anticipated debut readers are clamoring for.

Born in New York and raised mostly in Houston, P. DJÈLÍ CLARK spent the formative years of his life in the homeland of his parents, Trinidad and Tobago. P. Djèlí Clark is the author of the novellas The Black God's Drums, winner of a 2019 Alex Award from the American Library Association; The Haunting of Tram Car 015; and A Dead Djinn in Cairo. His short story "The Secret Lives of the Nine Negro Teeth of George Washington" (Fireside Fiction) has earned him both a Nebula and Locus award. He is loosely associated with the quarterly FIYAH: A Magazine of Black Speculative Fiction and an infrequent reviewer at Strange Horizons. He currently resides in New England and ruminates on issues of diversity in speculative fiction.