One Book, One Kirkwood: Diana Abu-Jaber - Fencing with the King 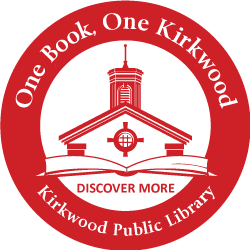 In person at the Kirkwood Performing Arts Center
210 E Monroe Ave, Kirkwood, MO
To receive an email reminder for the event, fill out the form here.
Masks will be required for in person attendees.

One Book, One Kirkwood & Left Bank Books Presents
the award-winning author of seven books of fiction and nonfiction
Diana Abu- Jaber
for an in person event at the Kirkwood Performing Arts Center.
Join us in person and order a copy of
Fencing with the King
from Left Bank Books to support authors and independent bookstores!

For more information about the event, please visit One Book, One Kirkwood here.

Diana Abu-Jaber was born in Syracuse, New York to an American mother and a Jordanian father. When she was seven, her family moved to Jordan for two years, and she has lived between the US and Jordan ever since. The struggle to make sense of this sort of hybrid life, or “in-betweenness,” permeates Abu-Jaber’s fiction. Abu-Jaber received her MA from the University of Windsor. She later attended SUNY-Binghamton for her PhD.
Her first novel, Arabian Jazz—considered by many to be the first mainstream Arab-American novel—won the 1994 Oregon Book Award. Her forthcoming work of fiction, Fencing with the King, is a novel of Middle Eastern intrigue and suspense. Masterfully drawing on King Lear and Arthurian fable, Fencing with the King will explore the power of inheritance, the trauma of displacement, and whether we can release the past to build a future.
(Bio courtesy of Lyceum Agency)

Fencing with the King: A Novel (Hardcover)

The Language of Baklava: A Memoir (Paperback)

Life Without a Recipe: A Memoir (Paperback)