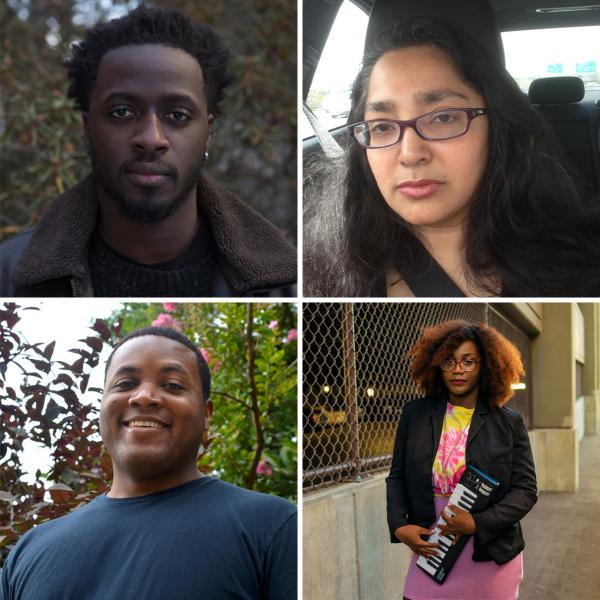 Join Left Bank Books and HEC-TV for a special night of music and readings at the 2nd annual Not So Late Night, featuring host Ron Austin, special guests Nana Kwame Adjei-Brenyah and Chaya Bhuvaneswar, and music by Katarra!

Nana Kwame Adjei-Brenyah is the New York Times-bestselling author of Friday Black. Originally from Spring Valley, New York, he graduated from SUNY Albany and went on to receive his MFA from Syracuse University. His work has appeared or is forthcoming from numerous publications, including the New York Times Book Review, Esquire, Literary Hub, the Paris Review, Guernica, and Longreads. He was selected by Colson Whitehead as one of the National Book Foundation's “5 Under 35” honorees.

Chaya Bhuvaneswar is a physician and writer whose debut story collection, White Dancing Elephants, was a best book of 2018 for Kirkus Reviews, included as a ‘best book’ for fall 2018 and the year by BuzzFeed, Huffington Post, Vulture, Entertainment Weekly, The Rumpus, The Millions, Southern Living, Washington Independent Review of Books, Book Riot, She Reads, Harper’s Bazaar, Elle, Vogue India, Culture Trip, Bustle, Lit Hub, Hello Giggles, and many others, and has been longlisted for the PEN American Robert Bingham story collection prize.

Ron A. Austin holds an MFA from the University of Missouri–St. Louis and is a 2016 Regional Arts Commission Fellow. Avery Colt Is a Snake, a Thief, a Liar, his first collection of linked stories, won the 2017 Nilsen Prize. The book will be released in fall of 2019. Austin’s short stories have been placed or are forthcoming in Pleiades, Story Quarterly, Ninth Letter, Black Warrior Review and other journals. As co-director of the River Styx Reading Series he works to share local and national literary talent. He, his partner Jennie, and son Elijah live in St. Louis with a whippet named Carmen.

Saint Louis native Katarra is art in one of it's most expressive forms: Music. As a singer/song-writer, and musician, Katarra takes Jazz, Soul, and R&B, with a Hip-Hop influence, as her own...all within her own universe of black girl magic. A musical idealist, her creations go into the ups and downs of love, passion, living, and a need to bring social awareness and change in the world.

Miss last year's Not So Late Night? Catch up on the highlights at HEC-TV!

This event is free and open to the public, but proof of purchase of Friday Black or White Dancing Elephants from Left Bank Books will be required to enter the signing line. Click the titles to pre-order your copy!

A free, secure and well-lit parking lot is located directly across from the Mad Art Gallery event space. It can accommodate up to 100 cars. Plus, on-street parking in the neighborhood is also free.