Considering recommendations from the CDC, Neal now will be in conversation ON A NEW DATE, April 13 at 7pm, with Left Bank Books' Shane Mullen in a Facebook Live discussion of his new book "Faster." Join us for this interactive conversation and order a copy of "Faster" from Left Bank Books to support authors and independent bookstores! 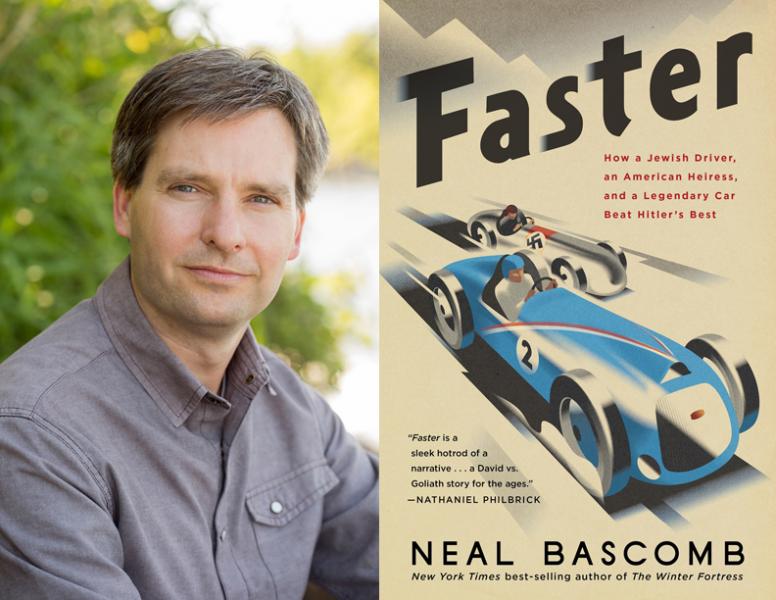 They were the unlikeliest of heroes. Rene Dreyfus, a former top driver on the international racecar circuit, had been banned from the best European teams—and fastest cars—by the mid-1930s because of his Jewish heritage. Charles Weiffenbach, head of the down-on-its-luck automaker Delahaye, was desperately trying to save his company as the world teetered toward the brink. And Lucy Schell, the adventurous daughter of an American multi-millionaire, yearned to reclaim the glory of her rally-driving days.

As Nazi Germany launched its campaign of racial terror and pushed the world toward war, these three misfits banded together to challenge Hitler’s dominance at the apex of motorsport: the Grand Prix. Their quest for redemption culminated in a remarkable race that is still talked about in racing circles to this day—but which, soon after it ended, Hitler attempted to completely erase from history.

Bringing to life this glamorous era and the sport that defined it, Faster chronicles one of the most inspiring, death-defying upsets of all time: a symbolic blow against the Nazis during history’s darkest hour.

"Faster is a full-throttle reminder of the power of heroes to inspire us in dark times. Neal Bascomb has brought to life a gripping, expertly researched tale of an unlikely band of dreamers who risked everything to challenge evil."
--Mitchell Zuckoff, New York Times best-selling author of Lost in Shangri-La and 13 Hours

"Sport, politics, and human passion collide in this sizzling ride of a book. Bringing the excitement of motor racing to life on a page is no easy task but Bascomb succeeds hugely. Rene Dreyfus's victory over the Nazis is a victory for us all."
--A.J. Baime, New York Times best-selling author of Go Like Hell and The Accidental President

Neal Bascomb is the award-winning and New York Times best-selling author of The Winter Fortress, Hunting Eichmann, The Perfect Mile, among others.

Faster: How a Jewish Driver, an American Heiress, and a Legendary Car Beat Hitler’s Best (Hardcover)