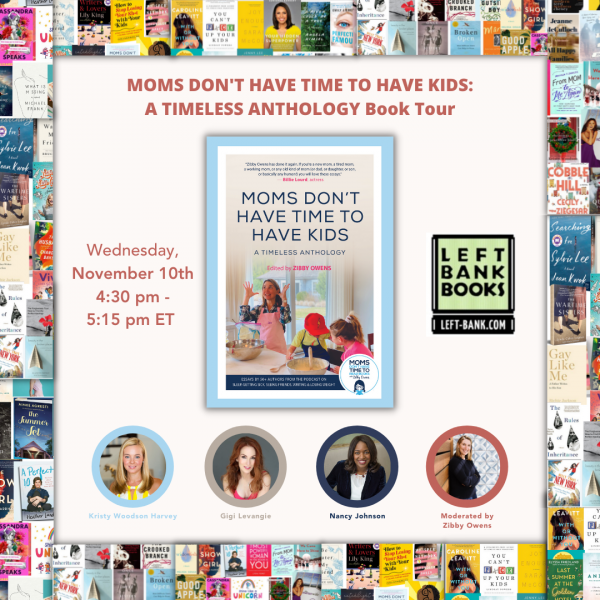 Left Bank Books & Zibby Owens welcomes
Kristy Woodson Harvey (Under the Southern Sky),
Gigi Levangie (Been There Married That),
Nancy Johnson (The Kindest Lie),
who will discuss Contemporary Fiction: Relationships
as part of the MOMS DON’T HAVE TIME TO HAVE KIDS - virtual tour and retreat
on our Facebook Live Page at 3:30pm CT / 4:30pm ET on November 10th.
This conversation will be moderated by
Zibby Owens.
Join us on our Facebook Live Page and order a copy of
Under the Southern Sky, Been There Married That, or The Kindest Lie
from Left Bank Books to support authors and independent bookstores!

About Moms Don't Have Time to Have Kids

Too tired to think? No time to read books? Zibby Owens gets it. Award-winning podcaster of Moms Don't Have Time to Read Books and mother of four (ages six to fourteen) compiled fifty-three essays by forty-nine authors to help the rest of us feel understood, inspired, and less alone.

The authors, all previous guests on her podcast (go listen!), include fifteen New York Times bestselling authors, five national bestsellers, and twenty-nine award-winning/notable/critically acclaimed writers. The super short essays were inspired by a few other things moms don't have time to do: sleep, get sick, write, lose weight, and see friends. Read one a week and you'll finish the whole book in a year: accomplishment!

You'll laugh, cry, think, and feel like you just had coffee with a close friend. If that best friend were a world-renowned author.

Kristy Woodson Harvey is the New York Times bestselling author of nine novels, including Under the Southern Sky, Feels Like Falling, and The Peachtree Bluff series. A Phi Beta Kappa, summa cum laude graduate of the University of North Carolina at Chapel Hill's school of journalism, her writing has appeared in numerous online and print publications including Southern Living, Traditional Home, USA TODAY, Domino, and O. Henry. Kristy is the winner of the Lucy Bramlette Patterson Award for Excellence in Creative Writing and a finalist for the Southern Book Prize. Her work has been optioned for film and television, and her books have received numerous accolades including Southern Living's Most Anticipated Beach Reads, Parade's Big Fiction Reads, and Entertainment Weekly's Spring Reading Picks. Kristy is the cocreator and cohost of the weekly web show and podcast Friends & Fiction. She blogs with her mom Beth Woodson on Design Chic, and loves connecting with fans on KristyWoodsonHarvey.com. She lives on the North Carolina coast with her husband and son where she is (always!) working on her next novel.

Gigi Levangie is the author of several novels, including The Starter Wife, which was adapted for an Emmy award-winning miniseries starring Debra Messing, and Maneater, which was adapted for a Lifetime miniseries starring Sarah Chalke. In addition, Levangie wrote the screenplay for the movie Stepmom, starring Julia Roberts and Susan Sarandon. Her articles have appeared in Vogue, Harper's Bazaar, and Glamour.

A native of Chicago's South Side, Nancy Johnson worked for more than a decade as an Emmy-nominated, award-winning television journalist at CBS and ABC affiliates nationwide. A graduate of Northwestern University and the University of North Carolina at Chapel Hill, she lives in downtown Chicago and manages brand communications for a large nonprofit. The Kindest Lie is her first book.

Zibby Owens is the creator and host of awardwinning podcast Moms Don't Have Time to Read Books. Zibby, named "NYC's Most Powerful Bookfluencer" by New York Magazine's Vulture, conducts warm, inquisitive conversations with authors as wide-ranging as Alicia Keys and Lena Dunham to Delia Owens and Brit Bennett, making her show a top literary podcast as selected by Oprah.com two years in a row.

Before the pandemic, Zibby ran a literary salon, hosted her own book fairs, and was a frequent bookstore event moderator. During the quarantine, Zibby hosted a daily Instagram Live author talk show "Z-IGTV," a weekly live show with her husband "KZ Time," launched an online magazine called We Found Time, and started Zibby's Virtual Book Club.

Zibby is a regular contributor to Good Morning America online and the Washington Post, and has contributed to Real Simple, Parents, Marie Claire, Redbook, and many other publications. She has appeared on CBS This Morning, the BBC, NPR's All Things Considered, Good Day LA, and local news outlets.

Zibby, a graduate of Yale University and Harvard Business School, currently lives in New York with her husband, Kyle, and her four children.

All you need to do to participate is log in to your personal Facebook account, go to Left Bank Books' Facebook Live Page, and wait for the livestream to begin on the page (you may need to refresh the page periodically until the stream begins).

Moms Don't Have Time to Have Kids: A Timeless Anthology (Paperback)

Under the Southern Sky (Paperback)

Been There, Married That: A Novel (Paperback)

The Kindest Lie: A Novel (Hardcover)