Mike McCormack - Getting It in the Head & Crowe's Requiem 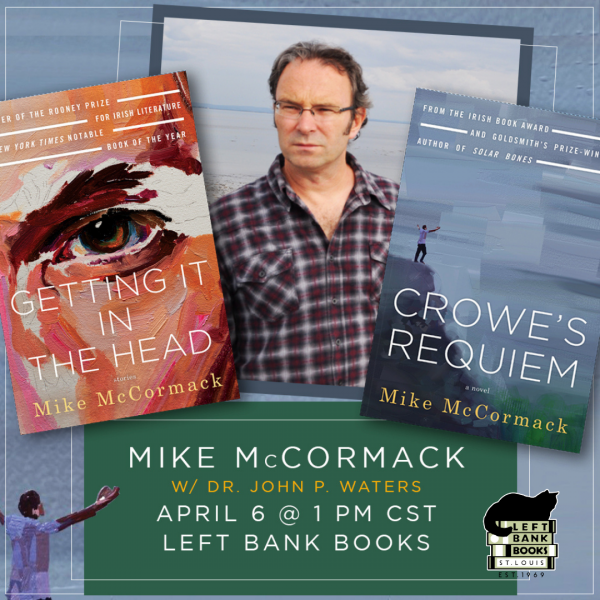 Left Bank Books welcomes Irish Book of the Year Award and Man Booker Prize nominated
Mike McCormack,
who will discuss his new collection of short stories,
Getting It in the Head
on our Facebook Live Page at 1pm CT on April 6.
McCormack will be in conversation with NYU Professor John P. Waters.
Join us on our Facebook Live Page and order a copy of
Getting It in the Head or Crowe's Requiem
from Left Bank Books to support authors and independent bookstores!
About Getting It in the Head
The acclaimed debut from the author of Booker-listed Solar Bones is a dark, uncanny collection of stunning breadth and audacity.

In this gothic, virtuoso debut collection, Mike McCormack dispenses nightmares both stylish and macabre. "A Is for Ax" offers an alphabetized account of the killing of a parent, while the title story tracks a chilling sibling rivalry. Others tell of a quiz on the road to Calvary, a door-to-door saleswoman trafficking in strange and menacing feats, and a self-mutilating artist pushing himself to the limit. These sly and dangerous stories, balanced on a knife's edge between life and death, showcase a young writer's mastery of wicked formal play.

Funny, fantastical tales that trample inventively on the toes of sanctimonious news media, provincial pride and the 20th century itself.
--The New York Times Book Review

Sharp as knives, mixing tongue-in-cheek bog Gothic with metaphysical flourishes and lashings of ultraviolence.
--The Guardian

The first novel from the author of Booker-listed Solar Bones, Crowe's Requiem is a dark fable that cemented Mike McCormack's position as a stunning new voice in world literature.

McCormack's myth-tinged debut novel gives us the unforgettable Crowe and his endlessly curious and self-mythologizing stories. Crowe is born in the remote village of Furnace in the West of Ireland and raised by his grandfather, a man of "madness and bullying love," who teaches him grim lessons about existence. Entirely silent until his third birthday, Crowe becomes an observant and isolated teenager, eventually leaving Furnace for a large and bewildering city. There he meets a woman who will change his life and outlook, and also finds himself diagnosed with a rare and fatal aging disease. A profound, philosophical, and darkly funny meditation on childhood and the nature of life and death, Crowe's Requiem challenges us with the power of stories to capture the pains, wonders, and mysteries of being a person in a "wrong world."

"The novel's heart is a beautiful love story, the kind that takes place in a room--two people whose love and desire become their transportation to all kinds of understanding. But for all its magical realism, Crowe's Requiem contains a very realistic magic: It makes you want to ask questions of ordinary people you meet, questions about living and dying, in case they are your guardian angels in disguise."
--Los Angeles Times

"A well-imagined first novel . . . Crowe's Requiem--through its marvelous portrait of the hero's grandfather, and scenes of student life, including romance--is rooted firmly in the heart."
--The Irish Times

Mike McCormack is an award-winning novelist and short story writer from County Mayo in Ireland. His previous work includes Forensic Songs; Notes from a Coma, which was shortlisted for the Irish Book of the Year Award; Crowe's Requiem; and Solar Bones, which was a Times (UK) Best Book of the Year, won the Goldsmiths Prize, and was longlisted for the Man Booker Prize. He lives in Galway.
John P. Waters is Clinical Associate Professor In Irish Studies, Department of English at New York University.
All you need to do to participate is log in to your personal Facebook account, go to Left Bank Books' Facebook Live Page, and wait for the livestream to begin on the page (you may need to refresh the page periodically until the stream begins). You may also watch the simulcast on Left Bank's YouTube channel.
Tuesday, April 6, 2021 - 1:00pm

Getting It in the Head: Stories (Paperback)