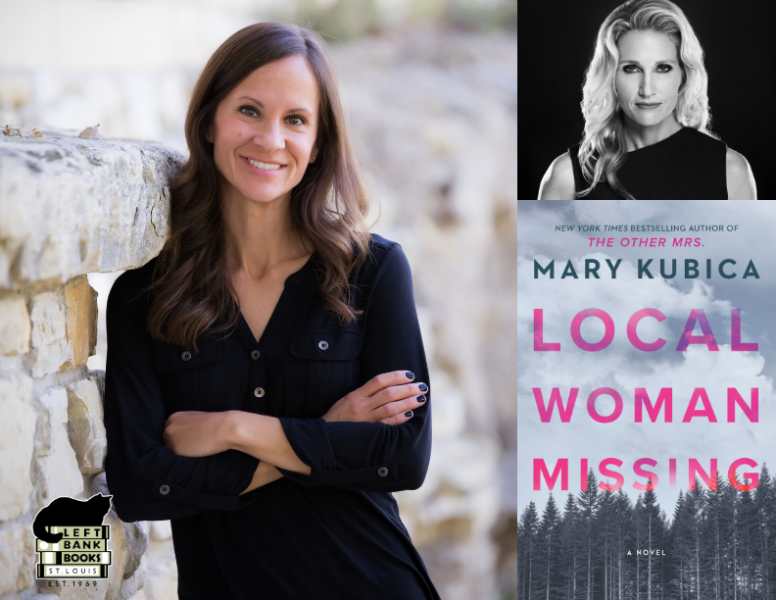 Left Bank Books and Park Row Books welcomes bestselling suspense author
Mary Kubica,
who will discuss their new novel,
Local Woman Missing
on May 18th at 6pm CT in a private online event.
Kubica will be in conversation with bestselling author
Kimberly McCreight.
This is an exclusive event that requires purchase of a SIGNED copy of
Local Woman Missing
from Left Bank Books for admission or a $5 admission ticket.
A CrowdCast link for entry will be emailed on the day of the event (5/18).
About Local Woman Missing
People don't just disappear without a trace...

Shelby Tebow is the first to go missing. Not long after, Meredith Dickey and her six-year-old daughter, Delilah, vanish just blocks away from where Shelby was last seen, striking fear into their once-peaceful community. Are these incidents connected? After an elusive search that yields more questions than answers, the case eventually goes cold.

Now, eleven years later, Delilah shockingly returns. Everyone wants to know what happened to her, but no one is prepared for what they'll find...

In this smart and chilling thriller, master of suspense and New York Times bestselling author Mary Kubica takes domestic secrets to a whole new level, showing that some people will stop at nothing to keep the truth buried.

"I'm shamelessly addicted to Mary Kubica's juicy, unpredictable reads, as much for her well-rounded, fully human, flawed characters as her sizzling plots--and she just keeps getting better. LOCAL WOMAN MISSING is a propulsive journey through a winding maze of secrets, leading to a jaw-dropping twist that I never saw coming. Loved every minute." --Joshilyn Jackson, New York Times bestselling author of Never Have I Ever

"Dark and twisty, with all the white-knuckle tension and jaw-dropping surprises readers have come to expect from Mary Kubica." --Riley Sager, New York Times bestselling author of Home Before Dark

Mary Kubica is the New York Times and USA Today bestselling author of THE GOOD GIRL and PRETTY BABY. She holds a Bachelor of Arts degree from Miami University in Oxford, Ohio, in History and American Literature. She lives outside of Chicago with her husband and two children and enjoys photography, gardening and caring for the animals at a local shelter.

A Good Marriage: A Novel (Paperback)