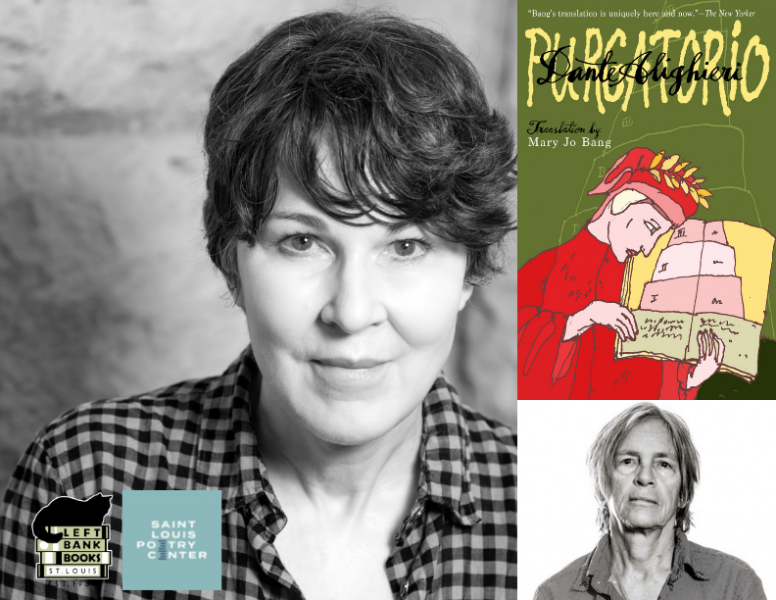 Left Bank Books and Saint Louis Poetry Center welcome St. Louis' Award-winning poet and professor
Mary Jo Bang,
who will discuss her new translation of Dante's
Purgatorio,
on our Facebook Live Page at 7pm CT on July 14th.
Bang will be in conversation with acclaimed poet and writer
Eileen Myles.
Join us on our Facebook Live Page and order a SIGNED copy of
Purgatorio
from Left Bank Books to support authors and independent bookstores!
About Purgatorio

Award-winning poet Mary Jo Bang's new translation of Purgatorio is the extraordinary continuation of her journey with Dante, which began with her transformative version of Inferno. In Purgatorio, still guided by the Roman poet Virgil, Dante emerges from the horrors of Hell to begin the climb up Mount Purgatory, a seven-terrace mountain with each level devoted to those atoning for one of the seven deadly sins. At the summit, we find the Terrestrial Heaven and Beatrice--who will take over for Virgil, who, as a pagan, can only take Dante so far. During the climb, we are introduced to the myriad ways in which humans destroy the social fabric through pride, envy, and vindictive anger.

In her signature lyric style, accompanied by her wise and exuberant notes, Bang has produced a stunning translation of this fourteenth-century text, rich with references that span time, languages, and cultures. The contemporary allusions echo the audacious character of the original, and slyly insist that whatever was true in Dante's era is still true. Usain Bolt, Tootsie Fruit Chews, the MGM logo, Leo the Lion, Amy Winehouse, Marvin Gaye, Bob Dylan, and Gertrude Stein are among those who make cameo appearances as Bang, with eloquence and daring, shepherds The Divine Comedy into the twenty-first century.

"After Mary Jo Bang's brilliant time-traveling Inferno, I couldn't wait for her Purgatorio, which turns out to be every bit as meaty, luscious, erudite, straight-talking, and joyful as I had hoped. Bang has an uncanny sense of how to slip inside and between Dante's lines, guiding us along his most perilous paths."--Susan Bernofsky

"'Luminous, empathetic, and inventively reverent, this thrilling sequel to Bang's Inferno maps a passage between hell and heaven for our purgatorial historical moment. . . . Above all, this ingenious and artful translation reminds us that Dante's Purgatorio, like the divine comedy in which we are all extras, is a poem about love." --Srikanth Reddy

Mary Jo Bang: has published eight poetry collections, including A Doll for Throwing and Elegy, winner of the National Book Critics Circle Award, and new translations of Dante’s Inferno and Purgatorio. She teaches at Washington University in Saint Louis.

Eileen Myles (they/them) came to New York from Boston in 1974 to be a poet, subsequently novelist, public talker and art journalist. A Sagittarius, their 22 books include For Now, evolution, Afterglow, I Must Be Living Twice/new & selected poems, and Chelsea Girls. In 2019 they wrote and directed an 18-minute super 8 film, The Trip, a puppet road film. See it on youtube. Eileen is the recipient of a Guggenheim, a Warhol/Creative Capital Arts Writers grant, 4 Lambda Book Awards, the Shelley Prize, and a poetry award from the Foundation for Contemporary Arts. In 2016, they received a Creative Capital grant and the Clark Prize for excellence in art writing. In 2019 Myles received a poetry award from the American Academy of Arts & Letters. In 2020 they got the Bill Whitehead Award for Lifetime Achievement from the Publishing Triangle. They live in New York and Marfa, TX.

For Now (Why I Write) (Hardcover)

A Doll for Throwing: Poems (Paperback)