Mark Kurlansky - The Importance of Not Being Ernest: My Life with the Uninvited Hemingway 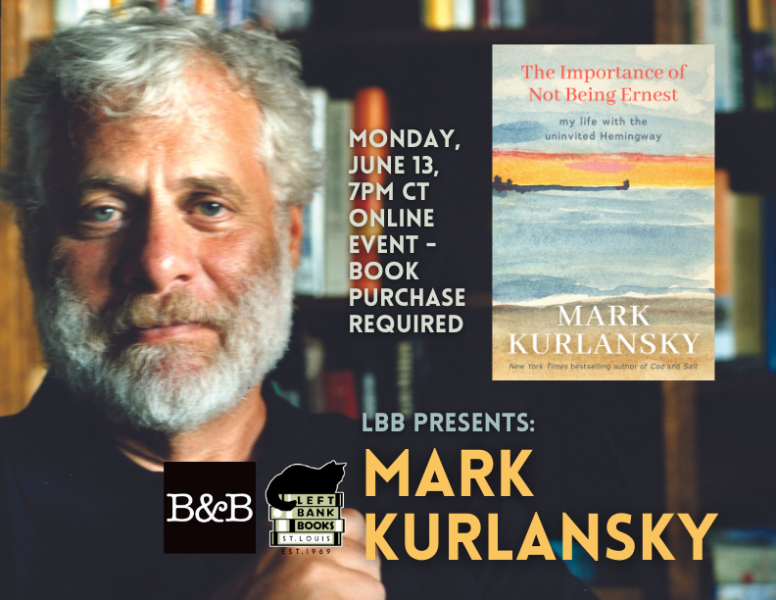 Left Bank Books and Books & Books with Miami Book Fair + independent bookstores welcome acclaimed & award winning author
Mark Kurlansky,
for a special virtual event to celebrate the release of
The Importance of Not Being Ernest: My Life with the Uninvited Hemingway,
in an exclusive online event at 7pm CT / 8pm ET on Monday, June 13th.
Kurlansky will be in conversation with Books & Books owner Mitchell Kaplan.
Order a copy of
The Importance of Not Being Ernest: My Life with the Uninvited Hemingway
from Left Bank Books or RSVP to gain access to the event & support authors and independent bookstores!
Please purchase before June 13th, 6pm CT to gain access to the event. An email will be sent the day of the event for attendees.
If you are not able to attend live, a recording will be available a few days after the event for people who have purchased the book.
Mark Kurlansky was born in Hartford, Connecticut. After receiving a BA in Theater from Butler University in 1970--and refusing to serve in the military--Kurlansky worked in New York as a playwright, having a number of off-off Broadway productions, and as a playwright-in-residence at Brooklyn College. He has worked many other jobs, including as a commercial fisherman, a dock worker, a paralegal, a cook, and a pastry chef. In the mid-1970s he turned to journalism, and from 1976 to 1991 he worked as a foreign correspondent for The International Herald Tribune, The Chicago Tribune, The Miami Herald, and The Philadelphia Inquirer. Based in Paris and then Mexico, he reported on Europe, West Africa, Southeast Asia, Central America, Latin America, and the Caribbean. His articles have appeared in a wide variety of newspapers and magazines, including The Philadelphia Inquirer, The Miami Herald, The Chicago Tribune, The Los Angeles Times, Time, The New York Times and many more. He has had 35 books published including fiction, nonfiction, and children's books. His books include Havana, Cod, Salt, Paper, The Basque History of the World, 1968, The Big Oyster, among other titles. He has received the Dayton Literary Peace Prize, Bon Appetit's Food Writer of the Year Award, the James Beard Award, and the Glenfiddich Award. He lives in New York City.
Mitchell Kaplan is the owner of Books & Books and co-founder of the Miami Book Fair.

"For all that's already been written about Hemingway, The Importance of Not Being Ernest illuminates his life and works in ways not seen before." --Sigrid Nunez, National Book Award winner and author of The Friend and What Are You Going Through

Discover Hemingway's biography through the eyes of a fellow author and journalist. New York Times bestselling author of Salt, Mark Kurlansky turns his historical eye to the life of Ernest Hemingway. Sometimes funny, sometimes sad, The Importance of Not Being Ernest shows the huge shadow Hemingway casts.

The perfect gift for writers. By a series of coincidences, Mark Kurlansky's life has always been intertwined with Ernest Hemingway's legend, starting with being in Idaho the day of Hemingway's death. The Importance of Not Being Ernest explores the intersections between Hemingway's and Kurlansky's lives, resulting in creative accounts of two inspiring writing careers. Travel the world with Mark Kurlansky and Ernest Hemingway in this personal memoir, where Kurlansky details his ten years in Paris and his time as a journalist in Spain--both cities important to Hemingway's adventurous life and prolific writing.

The Importance of Not Being Ernest: My Life with the Uninvited Hemingway (A unique Ernest Hemingway biography, Gift for writers) (Hardcover)

Cod: A Biography of the Fish that Changed the World (Paperback)

The Big Oyster: History on the Half Shell (Paperback)