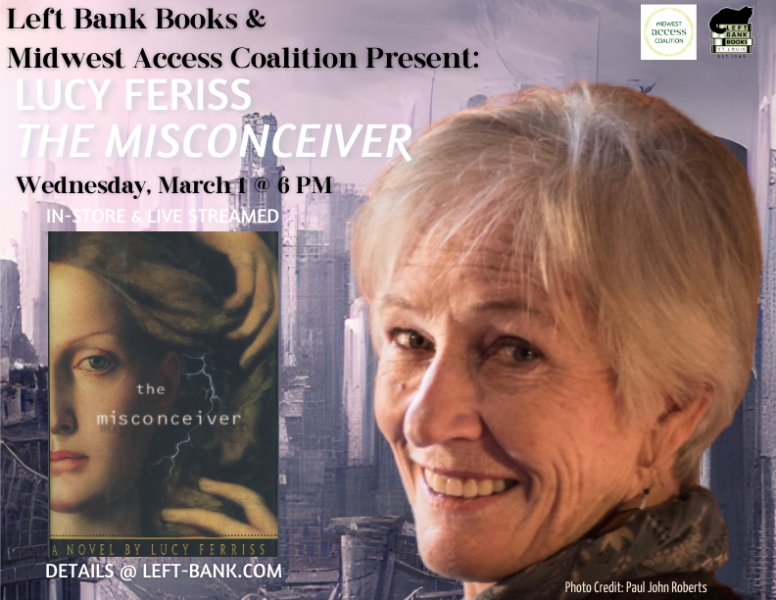 Born in St. Louis, Lucy Ferriss has lived on both coasts, in the middle, and abroad. The overturning of Roe vs. Wade has brought renewed attention to her frighteningly prescient novel, The Misconceiver, a dystopian near-future story of survival in a Christo-Fascist U.S., where laws increasingly turn against women, LGBTQ, and people of color. Ferriss's eleventh book, Foreign Climes, won the Brighthorse Books Award in short fiction. Other recent fiction includes A Sister to Honor (Penguin, 2015) and The Lost Daughter (2012), a Book-of-the-Month pick. Her memoir Unveiling the Prophet was named Best Book of the Year by the Riverfront Times. Her novel Nerves of the Heart was a finalist in the Peter Taylor Prize competition. Leaving the Neighborhood and Other Stories was the 2000 winner of the Mid-List First Series Award. Other short fiction and essays have appeared most recently in The American Scholar, december, Missouri Review, New England Review, and Crazyhorse and have received recognition from the National Endowment for the Arts, the Faulkner Society, and the Fulbright Commission, among others. She lives with her husband, Don Moon, in the Berkshires and Connecticut, where she has two strong sons and abiding passions for music, politics, travel, tennis, and wilderness. Her collection of essays, Meditations for a New Century, is forthcoming from Wandering Aengus Press.

About Midwest Access Coalition:
In June 2022, the U.S. Supreme Court reversed Roe v. Wade, ending federal abortion rights. Before this decision, the Midwest faced some of the most restrictive abortion policies in the country. Now, as many states are choosing to further restrict or ban abortion, individuals in this region face even greater barriers to access. Many people are forced to travel out-of-state in order to receive the services they need.

The hardships and costs of travel vary, as does the cost of an abortion itself. If a person is struggling to come up with enough money to pay the bare minimum for their procedure, how will they be able to pay for travel, hotel stays, childcare, food, and other costs?

That's where we come in.

This fresh release of an epochal novel from the late 1990s unlocks the dystopic world of the United States circa 2026, when Roe v. Wade has been overturned and abortion finally banned in all 50 states. Following in the steps of her dead sister and mother, narrator Phoebe Masters works in the computer industry by day and at night performs illegal "misconceptions" in her basement, restoring to desperate women some measure of control over their own bodies. Outside, technology has progressed but social change has moved backward. Married women tend to stay home. Amniocentesis is illegal. The worst punishment for rape is a paternity suit. Homosexuality is back in the closet.

Yet despite her profession, despite the connection she sees between her job stamping out malware and her illicit vocation terminating pregnancies, Phoebe holds few political beliefs-until a love affair forces her to choose between closing herself off and revealing her secret. Betrayed, arrested, and jailed, she begins to confront the multiple contradictions of her world. Eventually she must choose- between revenge and forgiveness, family and self, guilt and accountability, love and action.

While The Misconceiver initially presents its characters' repression matter-of-factly, the accretion of detail concerning their emotional and physical pain makes this far more than a merely political novel. Phoebe is fiercely loyal to the memory of her sister but anxious for her own freedom. Haunted by memory and hunted by the law, she begins to find her true self even as she sheds her old identity. Set in a future that is not far-fetched but well within the range of our imagination, The Misconceiver not only addresses a vivid issue of our time but also brings to life characters and relationships that could well be ours, just over the horizon of time.

The Supreme Court's scheme to subject women's bodies to the whims of their respective state governments has birthed a million new allusions to The Handmaid's Tale. But let's consider another feminist novel . . . published 25 years ago. -Ron Charles, The Washington Post

The Misconceiver is primarily a powerful novel of dystopia. But it is also a very tense thriller. . . . Ferriss is a fine writer, and in this dark and starkly realistic tale, she answers all her own questions, pulling no punches. -The Times of London

If in this novel Ferriss makes you think, she will also make you feel. -PW (starred review)

The Misconceiver stands stalwartly by John Irving's Cider House Rules as a compassionate novel about abortion and, thus, about women. -St. Louis Post-Dispatch