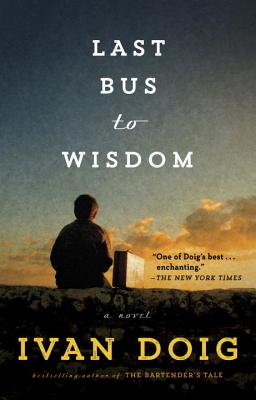 Join Novel Ideas for a reading group discussion of Last Bus to Wisdom by Ivan Doig.

Get Last Bus to Wisdom for 20% off by phone and online during the months of October and November!

The final novel from a great American storyteller.

Donal Cameron is being raised by his grandmother, the cook at the legendary Double W ranch in Ivan Doig’s beloved Two Medicine Country of the Montana Rockies, a landscape that gives full rein to an eleven-year-old’s imagination. But when Gram has to have surgery for “female trouble” in the summer of 1951, all she can think to do is to ship Donal off to her sister in faraway Manitowoc, Wisconsin. There Donal is in for a rude surprise: Aunt Kate–bossy, opinionated, argumentative, and tyrannical—is nothing like her sister. She henpecks her good-natured husband, Herman the German, and Donal can’t seem to get on her good side either. After one contretemps too many, Kate  packs him back to the authorities in Montana on the next Greyhound. But as it turns out, Donal isn’t traveling solo: Herman the German has decided to fly the coop with him. In the immortal American tradition, the pair light out for the territory together, meeting a classic Doigian ensemble of characters and having rollicking misadventures along the way.

Charming, wise, and slyly funny, Last Bus to Wisdom is a last sweet gift from a writer whose books have bestowed untold pleasure on countless readers.

Ivan Doig was a third-generation Montanan and the author of fifteen previous books, including the bestselling The Bartender’s Tale and The Whistling Season and the classic memoir This House of Sky. He was a National Book Award finalist and received the Wallace Stegner Award, among many other honors. Doig lived in Seattle with his wife, Carol, for many years until his death.

Praise for Last Bus to Wisdom:

Named a Best Book of the Year by Kirkus Reviews

Named a Best Book of the Summer by the Chicago Tribune, the Miami Herald, and Paste Magazine

“One of Doig’s best novels…enchanting … It’s warming to think that in his final months [he] shared the writing hours with one of his greatest characters: a version of his younger self wound up and set spinning on the long zigzag adventure called life in the American West.” -The New York Times Book Review

“With his final novel Doig aptly crowns a luminous literary legacy…'Last Bus to Wisdom' is a deeply humane coming-of-age tale set in the early 1950s…Forever the master of colorful characters and landscapes reflecting the vastness and vulnerability of the human heart, Doig has left us with a rollicking road trip filled with both.” -Seattle Times

“[T]he true successor to the dean of Western writers, Wallace Stegner…Last Bus to Wisdom is a rambunctious adventure packed with color, vitality and characters worth rooting for… a masterful fusion of picaresque exploits and ripping yarns.” -The San Francisco Chronicle