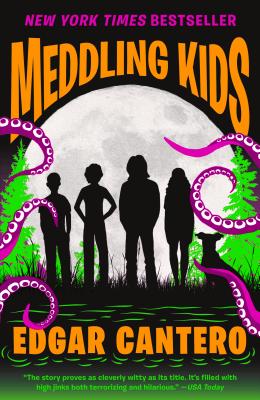 Join the Lesbian Reading Group for a discussion of  Meddling Kids by Edgar Cantero.

Get Meddling Kids for 20% off by phone and online during the months of June and July!

There is also an option for virtually meeting via Zoom at the same time. Email Shane for the link.

“The story proves as cleverly witty as its title. It's filled with high jinks both terrorizing and hilarious.” —USA Today

In 1977, four teenagers and a dog—Andy (the tomboy), Nate (the nerd), Kerri (the bookworm), Peter (the jock), and Tim (the Weimaraner)—solved the mystery of Sleepy Lake. The trail of an amphibian monster terrorizing the quiet town of Blyton Hills leads the gang to spend a night in Deboën Mansion and apprehend a familiar culprit: a bitter old man in a mask.

Now, in 1990, the twenty-something former teen detectives are lost souls. Plagued by night terrors and Peter's tragic death, the three survivors have been running from their demons. When the man they apprehended all those years ago makes parole, Andy tracks him down to confirm what she’s always known—they got the wrong guy. Now she'll need to get the gang back together and return to Blyton Hills to find out what really happened in 1977, and this time, she's sure they're not looking for another man in a mask.