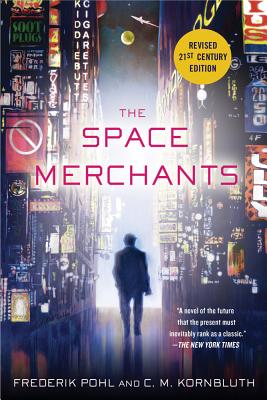 Join  Great Novels of the 22nd Century for a reading group discussion of The Space Merchants by Frederik Pohl and C.M. Kornbluth.

Get Space Merchant for 20% off online or over the phone during October and November!

In a vastly overpopulated near-future world, businesses have taken the place of governments and now hold all political power. States exist merely to ensure the survival of huge transnational corporations. Advertising has become hugely aggressive and boasts some of the world's most powerful executives.

Through advertising, the public is constantly deluded into thinking that all the products on the market improve the quality of life. However, the most basic elements are incredibly scarce, including water and fuel.

The planet Venus has just been visited and judged fit for human settlement, despite its inhospitable surface and climate; colonists would have to endure a harsh climate for many generations until the planet could be terraformed.

Mitch Courtenay is a star-class copywriter in the Fowler Schocken advertising agency and has been assigned the ad campaign that would attract colonists to Venus, but a lot more is happening than he knows about. Mitch is soon thrown into a world of danger, mystery, and intrigue, where the people in his life are never quite what they seem, and his loyalties and core beliefs will be put to the test.

Frederik Pohl (1919-2013) was one of science fiction's most important authors. Among his many novels are Gateway, which won the John W. Campbell Memorial Award, the Hugo Award, the Locus SF Award, and the Nebula Award, Beyond the Blue Event Horizon, which was a finalist for the Hugo and Nebula Awards, and Jem, which won the 1980 National Book Award in Science Fiction. He also collaborated on classic science fiction novels including The Space Merchants with Cyril M. Kornbluth. Pohl was an award-winning editor of Galaxy and If, a book editor at Bantam, and served as president of the Science Fiction Writers of America. He was named a Grand Master of Science Fiction by SFWA in 1993, and was inducted into the Science Fiction and Fantasy Hall of Fame.

C.M. Kornbluth (1923-1958) is a science fiction author, best known for the novel The Space Merchants, with Frederik Pohl.