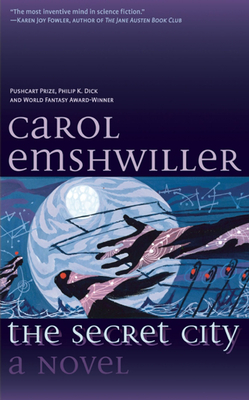 Join  Great Novels of the 22nd Century for a reading group discussion of Secret City by Carol Emshwiller.

Get The Secret City for 20% off online or over the phone during July and August!

The Secret City is a proud enclave carved in stone. Hidden high in a mountain range, it is a worn citadel protecting a lost culture. It harbors a handful of aliens stranded on Earth, waiting for rescue and running out of time. Over years of increasing poverty, an exodus to the human world has become their only chance for survival. The aliens are gradually assimilating not as a discrete culture but as a source of cheap labor.

But the sudden arrival of ill-prepared rescuers will touch off divided loyalties, violent displacement, and star-crossed love. As unlikely human allies are pitted against xenophobic aliens, the stage is set for a final standoff at the Secret City.