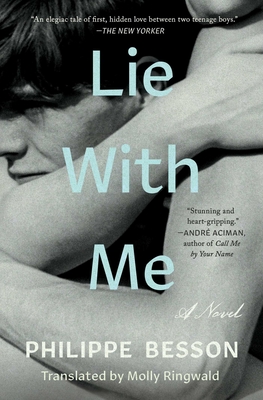 Join the Gay Men's Reading Group for a discussion of Lie With Me by Phillipe Besson.

Get Lie With me for 20% off by phone and online during the months of December and January!

“I remember the movement of his hips pressing against the pinball machine. This one sentence had me in its grip until the end. Two young men find each other, always fearing that life itself might be the villain standing in their way. A stunning and heart-gripping tale.” —André Aciman, author of Call Me by Your Name

The critically acclaimed, internationally beloved novel by Philippe Besson—“this year’s Call Me By Your Name” (Vulture) with raves in The New York Times, The New Yorker, The Wall Street Journal, NPR, Vanity Fair, Vogue, O, The Oprah Magazine, and Out—about an affair between two teenage boys in 1984 France, translated with subtle beauty and haunting lyricism by the iconic and internationally acclaimed actress and writer Molly Ringwald.

In this “sexy, pure, and radiant story” (Out), Philippe chances upon a young man outside a hotel in Bordeaux who bears a striking resemblance to his first love. What follows is a look back at the relationship he’s never forgotten, a hidden affair with a boy named Thomas during their last year of high school. Thomas is the son of a farmer; Philippe the son of a school principal. At school, they don’t acknowledge each other. But they steal time to meet in secret, carrying on a passionate, world-altering affair.

Despite the intensity of their attraction, from the beginning Thomas knows how it will end: “Because you will leave and we will stay,” he says. Philippe becomes a writer and travels the world, though as this “tender, sensuous novel” (The New York Times Book Review) shows, he never lets go of the relationship that shaped him, and every story he’s ever told.

“Beautifully translated by Ringwald” (NPR), this is “Philippe Besson’s book of a lifetime...an elegiac tale of first, hidden love” (The New Yorker).

Philippe Besson is an author, screenwriter, and playwright. His first novel, In the Absence of Men, was awarded the Emmanuel-Roblès Prize in 2001, and he is also the author of, among others, Late Autumn (Grand Prize RTL-Lire), A Boy from Italy, and The Atlantic House. In 2017 he published Lie With Me, a #1 French bestseller that won the the Maisons de la Presse Prize, and A Character from a Novel, an intimate portrait of Emmanuel Macron during his presidential campaign. His novels have been translated into twenty different languages.

Molly Ringwald’s writing has appeared in The New Yorker, The New York Times, The Guardian, and Vogue, and she is the author of the bestselling novel-in-stories When It Happens to You.

Lie With Me: A Novel (Paperback)