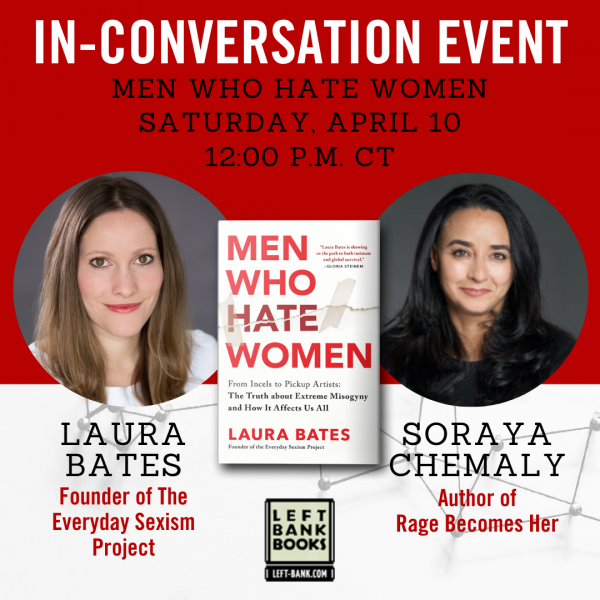 Left Bank Books welcomes Founder of The Everyday Sexism Project
Laura Bates,
who will discuss her new book,
Men Who Hate Women: From Incels to Pickup Artists: The Truth about Extreme Misogyny and How It Affects Us All ,
on our Facebook Live Page at 12pm CT on April 10.
Bates will be in conversation with author and Executive Director of The Representation Project
Soraya Chemaly.
Join us on our Facebook Live Page and order a copy of
Men Who Hate Women
from Left Bank Books to support authors and independent bookstores!

About Men Who Hate Women

Women's rights activist Laura Bates has been the target of many misogynistic attacks online: from hate-fueled Twitter rants to vivid descriptions of her own rape and even death threats. At first, the vitriol seemed to be the work of a small handful of individual men... but over time, the volume and consistency of the attacks hinted at something bigger and more ominous. As Bates followed the thread of online misogyny farther into the corners of the internet, the spiral of hateful and toxic rhetoric deepened until she found an unseen, organized movement of thousands of anonymous men wishing violence (and worse) upon women--the terrorism no one is talking about. Men Who Hate Women examines the rise of secretive extremist communities who despise women as Bates traces the roots of misogyny across a complex spider web of groups extending from Men's Rights Activists to trolls and the incel movement.

Drawing parallels to other extremist movements around the world, including white nationalism, Bates shows what attracts men to the movement, how it grooms and radicalizes boys, how it operates, and what can be done to stop it. Most urgently of all, she follows the pathways this extreme ideology has taken from the darkest corners of the internet to emerge covertly in our mainstream media, our playgrounds, and our government. Going undercover on and offline, Bates provides the first comprehensive look at this under-the-radar phenomenon, including eye-opening interviews with former members of these communities, the academics studying this movement, and the men fighting back.

By turns fascinating and horrifying, Men Who Hate Women is a broad, unflinching account of the deep current of loathing toward women and anti-feminism that underpins our society and is a must-read for parents, educators, and anyone who believes in equality for women.

"Men Who Hate Women has the power to spark social change."--Sunday Times

Laura Bates is the founder of the Everyday Sexism Project, a crowd-sourced collection of stories from women around the world about their experiences with gender inequality. Laura has received the 2015 British Empire Medal in the Queen’s Birthday Honours; the WMC Digital Media Award from the Women’s Media Center, the Georgina Henry prize; has been named in the BBC Woman’s Hour Power List 2014 Game Changers, and won Cosmopolitan’s Ultimate Woman of the Year Award. She was also named in CNN’s 10 Visionary Women List. Follow her efforts on Twitter @everydaysexism.

Soraya Chemaly is currently the Executive Director of The Representation Project. An award-winning author and activist, she writes and speaks frequently on topics related to gender norms, inclusivity, social justice, free speech, sexualized violence, and technology. The former director and co-founder of the Women’s Media Center Speech Project, she has long been committed to expanding women’s civic and political participation. Soraya is also the author of Rage Becomes Her: The Power of Women’s Anger, which was recognized as a Best Book of 2018 by the Washington Post, Fast Company, Psychology Today, Autostraddle and NPR and has been translated into several languages.

Men Who Hate Women: From Incels to Pickup Artists: The Truth about Extreme Misogyny and How It Affects Us All (Hardcover)

Rage Becomes Her: The Power of Women's Anger (Paperback)