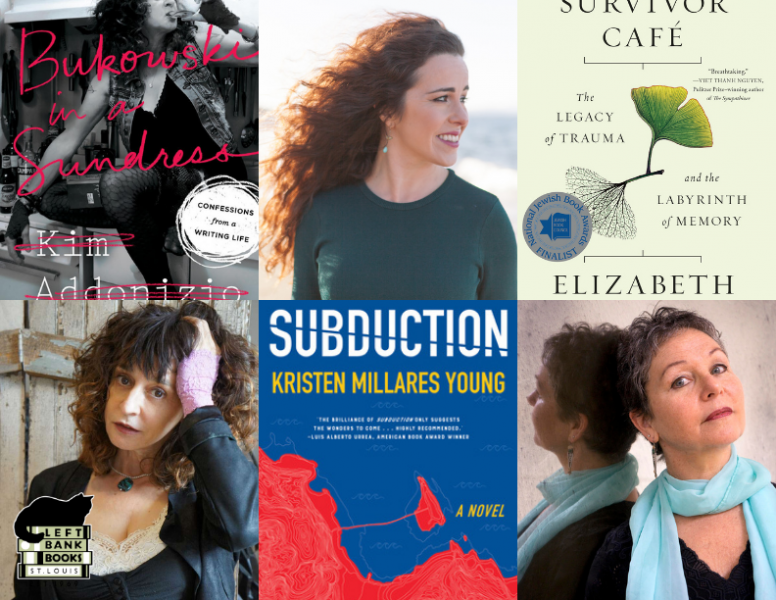 Left Bank Books presents prize-winning journalist and essayist
Kristen Millares Young,
in conversation with fellow writers
Kim Addonizio and Elizabeth Rosner,
on Facebook Live at 7pm CDT on October 13.
Join us on our Facebook Live Page and order copies of
Subduction, by Kristen Millares Young,
Bukowski in a Sundress: Confessions from a Writing Life, by Kim Addonizio, and
Survivor Café: The Legacy of Trauma and the Labyrinth of Memory, by Elizabeth Rosner,
from Left Bank Books to support authors and independent bookstores!

About Subduction, by Kristen Millares Young

Fleeing the shattered remains of her marriage and treachery by her sister, a Latina anthropologist named Claudia takes refuge in Neah Bay, a Native whaling village on the jagged Pacific coast. Claudia yearns to lose herself to the songs of the tribe and the secrets of a spirited hoarder named Maggie. Instead, she stumbles into Maggie's prodigal son Peter, who, spurred by his mother's failing memory, has returned seeking answers to his father's murder. Claudia helps Peter's family convey a legacy delayed for decades by that death, but her presence, echoing centuries of fraught contact with indigenous peoples, brings lasting change and real damage. Through the ardent collision of Peter and Claudia, Subduction portrays not only their strange allegiance after grievous losses but also their shared hope of finding solace and community on the Makah Indian Reservation. An intimate tale of stunning betrayals.

About Bukowski in a Sundress, by Kim Addonizio

Kim Addonizio is used to being exposed. As a writer of provocative poems and stories, she has encountered success along with snark: one critic dismissed her as “Charles Bukowski in a sundress.” (“Why not Walt Whitman in a sparkly tutu?” she muses.) Now, in this utterly original memoir in essays, she opens up to chronicle the joys and indignities in the life of a writer wandering through middle age. At once intimate and outrageous, Addonizio’s memoir radiates all the wit and heartbreak and ever-sexy grittiness that her fans have come to love—and that new readers will not soon forget.

About Survivor Café, by Elizabeth Rosner

As featured on NPR and in The New York Times, Survivor Cafe is a bold work of nonfiction that examines the ways that survivors, witnesses, and post-war generations talk about and shape traumatic experiences. As firsthand survivors of many of the twentieth century's most monumental events--the Holocaust, Hiroshima, the Killing Fields--begin to pass away, Survivor Caf addresses urgent questions: How do we carry those stories forward? How do we collectively ensure that the horrors of the past are not forgotten?

Kristen Millares Young is the author of the novel Subduction. A prize-winning journalist and essayist, Kristen serves as Prose Writer-in-Residence at Hugo House. Her investigations, essays and reviews appear in the Washington Post, the Guardian and elsewhere. She was the researcher for the New York Times team that produced “Snow Fall,” which won a Pulitzer.

Kim Addonizio is the author of a dozen books of poetry and prose, most recently Bukowski in a Sundress: Confessions from a Writing Life (Penguin) and Mortal Trash: Poems (W.W. Norton). A new poetry collection, Now We’re Getting Somwhere, is forthcoming in March 2021. A book of stories, The Palace of Illusions, was published by Soft Skull/Counterpoint. Visit her online at http://www.kimaddonizio.com.

Elizabeth Rosner is a bestselling novelist, poet, and essayist living in Berkeley, California. Her newest book of non-fiction, Survivor Café: The Legacy of Trauma and the Labyrinth of Memory, was featured on NPR’s All Things Considered and in The New York Times; it was also a finalist for a National Jewish Book Award. Her three acclaimed novels have been translated into nine languages and have received prizes in the US and in Europe. A graduate of Stanford University, the University of California at Irvine, and the University of Queensland in Australia, she lectures and teaches writing workshops internationally. www.elizabethrosner.com

Bukowski in a Sundress: Confessions from a Writing Life (Paperback)

Survivor Café: The Legacy of Trauma and the Labyrinth of Memory (Paperback)