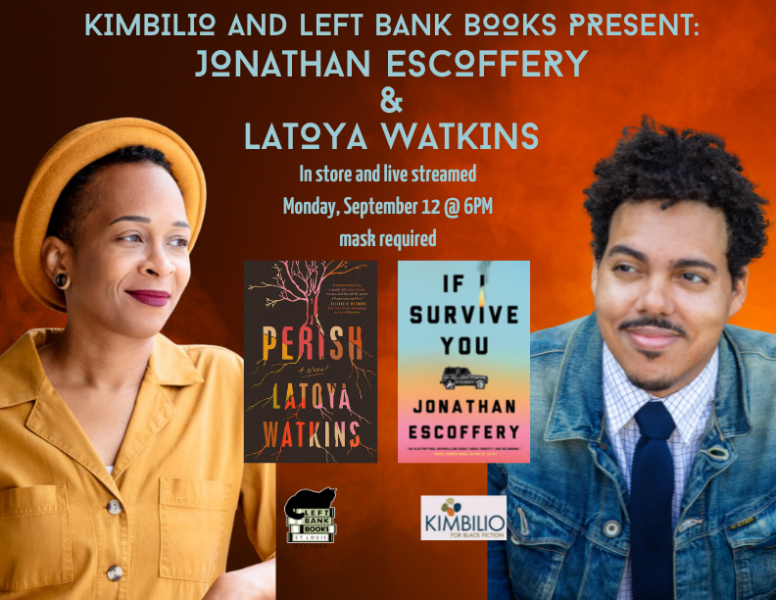 Kimbilio is a community of writers and scholars committed to developing, empowering and sustaining African American fiction writers and their stories. kimbiliofiction.com

Kimbilio® means “safe haven” in Swahili. We are a community of writers and scholars committed to developing, empowering and sustaining fiction writers from the African diaspora and their stories.  Projects include readings, presentations at professional conferences, social media networking, book prizes, and an annual summer retreat for fiction writers who are members of the Kimbilio community.

Jonathan Escoffery is the recipient of the 2020 Plimpton Prize for Fiction, a 2020 National Endowment for the Arts Literature Fellowship, and the 2020 ASME Award for Fiction. His fiction has appeared in The Paris Review, American Short Fiction, Prairie Schooner, AGNI, Passages North, Zyzzyva, and Electric Literature, and has been anthologized in The Best American Magazine Writing. He received his MFA from the University of Minnesota, is a PhD fellow in the University of Southern California's Creative Writing and Literature Program, and in 2021 was awarded a Wallace Stegner Fellowship in the Creative Writing Program at Stanford University.

LaToya Watkins's writing has appeared in A Public Space, The Sun, McSweeney's, The Kenyon Review, The Pushcart Prize XXXIX (2015), and elsewhere. She has received grants, scholarships, and fellowships from the Middlebury Bread Loaf Writers' Conference, the MacDowell Colony, Yaddo, Hedgebrook, and A Public Space (she was one of their 2018 emerging writers fellows). She holds a PhD from the University of Texas at Dallas. Perish is her debut novel.

About If I Survive You

If I Survive You is a collection of connected short stories that reads like a novel, that reads like real life, that reads like fiction written at the highest level. --Ann Patchett - Kaleidoscopic, urgent, hilarious, revelatory and like nothing you've read before. --Marlon James - May well be the buzziest debut of 2022. --Oprah Daily

A September 2022 IndieNext Pick. A major debut, blazing with style and heart, that follows a Jamaican family striving for more in Miami, and introduces a generational storyteller.

In the 1970s, Topper and Sanya flee to Miami as political violence consumes their native Kingston. But America, as the couple and their two children learn, is far from the promised land. Excluded from society as Black immigrants, the family pushes on through Hurricane Andrew and later the 2008 recession, living in a house so cursed that the pet fish launches itself out of its own tank rather than stay. But even as things fall apart, the family remains motivated, often to its own detriment, by what their younger son, Trelawny, calls "the exquisite, racking compulsion to survive."

Masterfully constructed with heart and humor, the linked stories in Jonathan Escoffery's If I Survive You center on Trelawny as he struggles to carve out a place for himself amid financial disaster, racism, and flat-out bad luck. After a fight with Topper--himself reckoning with his failures as a parent and his longing for Jamaica--Trelawny claws his way out of homelessness through a series of odd, often hilarious jobs. Meanwhile, his brother, Delano, attempts a disastrous cash grab to get his kids back, and his cousin, Cukie, looks for a father who doesn't want to be found. As each character searches for a foothold, they never forget the profound danger of climbing without a safety net.

Pulsing with vibrant lyricism and inimitable style, sly commentary and contagious laughter, Escoffery's debut unravels what it means to be in between homes and cultures in a world at the mercy of capitalism and whiteness. With If I Survive You, Escoffery announces himself as a prodigious storyteller in a class of his own, a chronicler of American life at its most gruesome and hopeful.

"It's truly a feat that a book of short stories tackling such big stuff--family, love, violence, race--could be so damn funny. Jonathan Escoffery is a writer only just getting started, and his first book is a welcome reminder of what fiction can do." --Rumaan Alam, author of Leave the World Behind

"If I Survive You is a collection of brilliant wit, real heart, and electric humor. Jonathan Escoffery masterfully mines from his life and emerges, in this debut, as a talent not to be ignored." --Nana Kwame Adjei-Brenyah, author of Friday Black

Named A Most Anticipated Book of 2022 by *Good Morning America.com* *Essence* *Esquire* *Bustle* and *The Millions*

From a stunning new voice comes a powerful debut novel, Perish, about a Black Texan family, exploring the effects of inherited trauma and intergenerational violence as the family comes together to say goodbye to their matriarch on her deathbed.

Bear it or perish yourself. Those are the words Helen Jean hears that fateteful night in her cousin's outhouse that change the trajectory of her life.

Spanning decades, Perish tracks the choices Helen Jean--the matriarch of the Turner family--makes and the way those choices have rippled across generations, from her children to her grandchildren and beyond.

Told in alternating chapters, Perish follows four members of the Turner family: Julie B., a woman who regrets her wasted youth and the time spent under Helen Jean's thumb; Alex, a police officer grappling with a dark and twisted past; Jan, a mother of two who yearns to go to school and leave Jerusalem, Texas, and all of its trauma behind for good; and Lydia, a woman whose marriage is falling apart because her body can't seem to stay pregnant, as they're called home to say goodbye to their mother and grandmother.

This family's "reunion" unearths long-kept secrets and forces each member to ask themselves important questions about who is deserving of forgiveness and who bears the cross of blame.

Set in vividly drawn Texas and tackling themes like trauma, legacy, faith, home, class, race, and more, this beautiful yet heart heart-wrenching novel will appeal to anyone who is interested in the intricacies of family and the ways bonds can be made, maintained, or irrevocably broken.

"LaToya Watkins writes with a gaze that is warm and compassionate, but courageous and unflinching, refusing to look away from difficulty. Perish is a resonant debut novel, a robust family story told with beautiful cadences and textures. Watkins has a wonderful heart that animates every page from beginning to end." ―Jamel Brinkley, author of A Lucky Man

"From the early pages of this novel, I knew I was in the hands of a master storyteller. Watkins stuns in this impressive debut about how trauma travels with us across generations. This story of family and forgiveness will stay with you long after the last page." --Nancy Johnson, author of The Kindest Lie

If I Survive You (Hardcover)