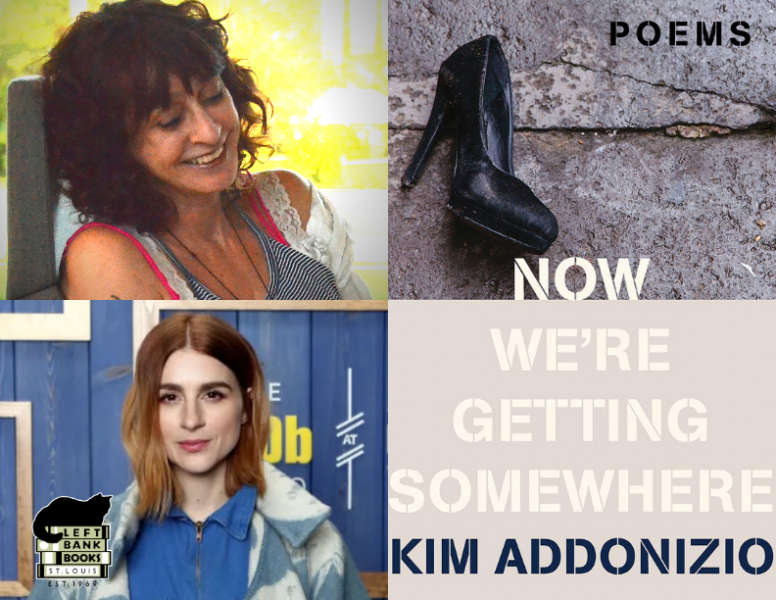 Left Bank Books welcomes award-winning poet
Kim Addonizio,
who will discuss her new collection,
Now We're Getting Somewhere: Poems,
on our Facebook Live Page at 7pm CT on April 6.
Addonizio will be in conversation with stage, film, and TV actress and contributor to Notes from the Bathroom Line: Humor, Art, and Low-Grade Panic from 150 of the Funniest Women in Comedy
Aya Cash.
Join us on our Facebook Live Page and order a SIGNED copy of
Now We're Getting Somewhere
from Left Bank Books to support authors and independent bookstores!

About Now We're Getting Somewhere

A dark, no-holds-barred, and often hilarious collection from a prize-winning poet, veering between the poles of self and world.

Kim Addonizio’s sharp and irreverent eighth volume, Now We’re Getting Somewhere, is an essential companion to your practice of the Finnish art of kalsarikännit—drinking at home, alone in your underwear, with no intention of going out. Imbued with the poet’s characteristic precision and passion, the collection charts a hazardous course through heartache, climate change, dental work, Outlander, semiotics, and more.

Combatting existential gloom with a wicked, seductive energy, Addonizio investigates desire, loss, and the madness of contemporary life. She calls out to Walt Whitman and John Keats, echoes Dorothy Parker, and finds sisterhood with Virginia Woolf.

Sometimes confessional, sometimes philosophical, these poems weave from desolation to drollery and clamor with raucous imagery: an insect in high heels, a wolf at an uncomfortable party, a glowing and self-serious guitar.

A poet whose “voice lifts from the page, alive and biting” (Sky Sanchez, San Francisco Book Review), Addonizio reminds her reader, "if you think nothing & / no one can / listen I love you joy is coming."

Kim Addonizio’s eighth poetry collection is Now We’re Getting Somewhere (W.W. Norton,March 2021). She has also published two novels, two short story collections, and two books on writing poetry: The Poet’s  Companion (with Dorianne Laux) and Ordinary Genius: A Guide for the Poet Within. Her most recent publications are a memoir, Bukowski in a Sundress (Penguin), and a book of poems, Mortal Trash (W.W. Norton). Her work has been recognized with a Guggenheim Fellowship, two NEA Fellowships, two Pushcart Prizes, and other awards, and has been translated into several languages. Her collection Tell Me was a National Book Award Finalist. Her poems and essays have appeared in the New Yorker, the New York Times, Poetry, The Sun, and many anthologies. She lives in Oakland, CA.

Notes From the Bathroom Line: Humor, Art, and Low-grade Panic from 150 of the Funniest Women in Comedy (Hardcover)