Kelly Barnhill - When Women Were Dragons 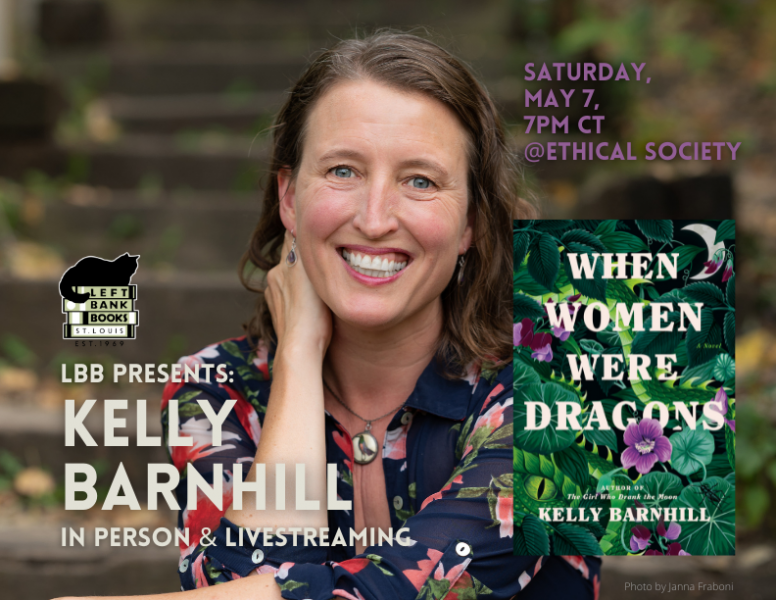 Left Bank Books welcomes Newbery Award-Winning and Bestselling Author
Kelly Barnhill,
who will discuss her debut adult novel that "packs a punch,"
When Women Were Dragons,
in person at Ethical Society of St. Louis
and virtually at 7pm CT on May 7th.
Join us in person or on our YouTube or Facebook Live Page and order a copy of
When Women Were Dragons
from Left Bank Books to support authors and independent bookstores!
You can request a personalized copy of the book by leaving your request in the order comments.
KELLY BARNHILL has written several middle grade novels, including The Girl Who Drank the Moon, a New York Times bestseller and winner of the 2017 John Newbery Medal. She is also the recipient of the World Fantasy Award, and has been a finalist for the SFWA Andre Norton Nebula Award and the PEN America Literary Award. She lives in Minneapolis with her family.
A rollicking feminist tale set in 1950s America where thousands of women have spontaneously transformed into dragons, exploding notions of a woman's place in the world and expanding minds about accepting others for who they really are. - The first adult novel by the Newbery award-winning author of The Girl Who Drank the Moon

Alex Green is a young girl in a world much like ours, except for its most seminal event: the Mass Dragoning of 1955, when hundreds of thousands of ordinary wives and mothers sprouted wings, scales, and talons; left a trail of fiery destruction in their path; and took to the skies. Was it their choice? What will become of those left behind? Why did Alex's beloved aunt Marla transform but her mother did not? Alex doesn't know. It's taboo to speak of.

Forced into silence, Alex nevertheless must face the consequences of this astonishing event: a mother more protective than ever; an absentee father; the upsetting insistence that her aunt never even existed; and watching her beloved cousin Bea become dangerously obsessed with the forbidden.

In this timely and timeless speculative novel, award-winning author Kelly Barnhill boldly explores rage, memory, and the tyranny of forced limitations. When Women Were Dragons exposes a world that wants to keep women small--their lives and their prospects--and examines what happens when they rise en masse and take up the space they deserve.

"Ferociously imagined, incandescent with feeling, this book is urgent and necessary and as exhilarating as a ride on dragonback." -- Lev Grossman, author of The Magicians Trilogy

"Completely fierce, unmistakably feminist, and subversively funny, When Women Were Dragons brings the heat to misogyny with glorious imagination and talon-sharp prose. Check the skies tonight--you might just see your mother." -- Bonnie Garmus, author of Lessons in Chemistry

"A complex, heartfelt story about following your heart and opening your mind to new possibilities. This novel's magic goes far beyond the dragons." -- Kirkus (starred review)

When Women Were Dragons: A Novel (Hardcover)

When Women Were Dragons: A Novel (Large Print / Paperback)

The Ogress and the Orphans (Hardcover)