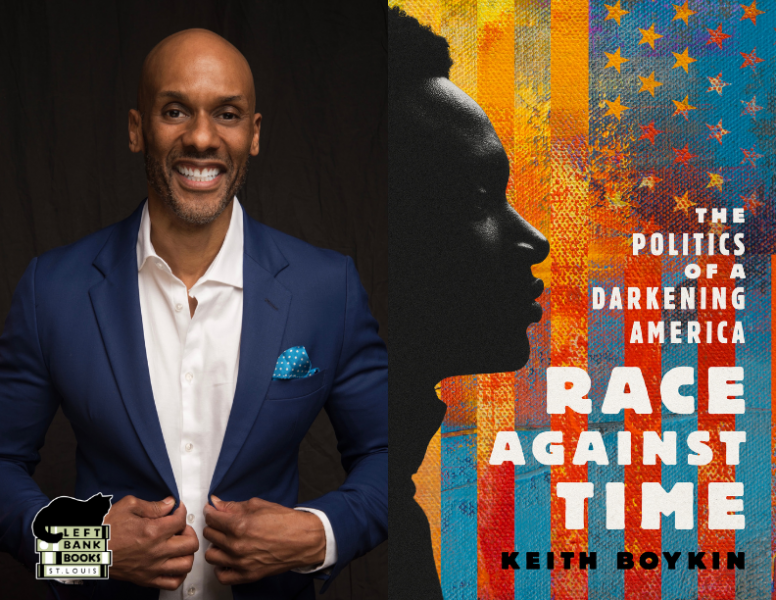 Left Bank Books welcomes St. Louis native, CNN political commentator, New York Times best-selling author,
and a former White House aide to President Bill Clinton,
Keith Boykin,
who will discuss his book
Race Against Time: The Politics of a Darkening America,
in our store on May 17th at 7pm!
We are so happy to resume in person programming in the store and thrilled to welcome Keith Boykin back to St. Louis!
Order a copy of
Race Against Time: The Politics of a Darkening America
from Left Bank Books to support authors and independent bookstores!
Keith will personalize and sign copies for sale from Left Bank Books.
If you are unable to make it in person, leave a personalization note in your online order.

About Race Against Time: The Politics of a Darkening America

A Cold Civil War has engulfed the nation.

After a deadly pandemic, shocking incidents of police brutality, a racial justice crisis, and the fall of a dangerous demagogue, America remains more divided than at any time in decades. At the heart of this national crisis is the fear of a darkening America--a country in which there is no longer a predominant white majority.

As the Republican Party has lost the popular vote in seven of the last eight presidential elections, its leaders have incited white Americans in a last-ditch race against time to stop the advance of a new, multiracial emerging majority. Keith Boykin, long time political commentator, has watched this white resentment consume the GOP over the course of a life in politics, activism, and journalism. He has also observed the divisions among Democrats, as white progressives have postponed demands for full racial equity, while Black voters have often been too forgiving of party leaders who have failed to deliver. America can no longer avoid its long overdue reckoning with the past, Boykin argues. With the familiarity of personal experience and the acuity of historical insight, Boykin urges us to fight racism, sexism, xenophobia, and homophobia, and save the union, not just by making Black lives matter, but by making Black lives equal.

"Race Against Time is Keith Boykin's best book yet in a long list of books and anthologies that have helped define what cultural criticism is. This book is also an account of what it means to be overlooked in a capitalist landscape that denies the existence and contribution of black queer citizens. What floors me is that Boykin's genius--from all the political and racial history from Reconstruction onward, to his well-wrought recounting of the antics of US presidents from Reagan to Trump--still allows him to remain a man of hope and a writer that affirms the spirit in essays that speak to us as a comforting brother would." -- Jericho Brown, author of The Tradition

"A provocative and compulsively readable guide to racial politics in the Black Lives Matter era, Race Against Time is the right book at the right time. We would ignore Boykin's searing analysis and urgent solutions at our peril."-- Paul Butler, MSNBC legal analyst and author of Chokehold: Policing Black Men

Booklist (08/01/2021): CNN political commentator Boykin (Beyond the Down Low) reflects on America's violent past and policies made by white politicians concerning the country's shifting demographics and its dwindling proportion of white people. Drawing on both legal scholarship and his own experiences, Boykin argues that the fear of a darkening America has a deep-rooted history, and outlines how this fear transpired in the rhetoric and policies of all political parties. Boykin reflects on his upbringing in St. Louis, his work during the Clinton Administration, and moments of racial violence in history, from the American Civil War to the East St. Louis Riots to the murders of Trayvon Martin, George Floyd, and Breonna Taylor. He writes lucidly on these crises and explains how we must eradicate racial disparities and move beyond glib gestures and reconciliation for African Americans. Readers interested in American politics and the role of racism in U.S. history should pick up this insightful and alarming book to better understand how America's political system perpetuates racial injustice. COPYRIGHT(2021) Booklist, ALL RIGHTS RESERVED.

Keith Boykin is a CNN political commentator, New York Times best-selling author, and a former White House aide to President Bill Clinton. Boykin teaches at the Institute for Research in African-American Studies at Columbia University in New York and previously taught at American University in Washington, D.C. He is a co-founder and first board president of the National Black Justice Coalition. He was a co-host of the BET Networks talk show My Two Cents, starred on the Showtime reality television series American Candidate, was an associate producer of the film Dirty Laundry, and he has appeared on many other TV shows, including BET's Being Mary Jane. A graduate of Dartmouth College and Harvard Law School, Boykin is a Lambda Literary Award-winning author of four books. He lives in New York City.

Race Against Time: The Politics of a Darkening America (Hardcover)

For Colored Boys Who Have Considered Suicide When the Rainbow Is Still Not Enough: Coming of Age, Coming Out, and Coming Home (Paperback)