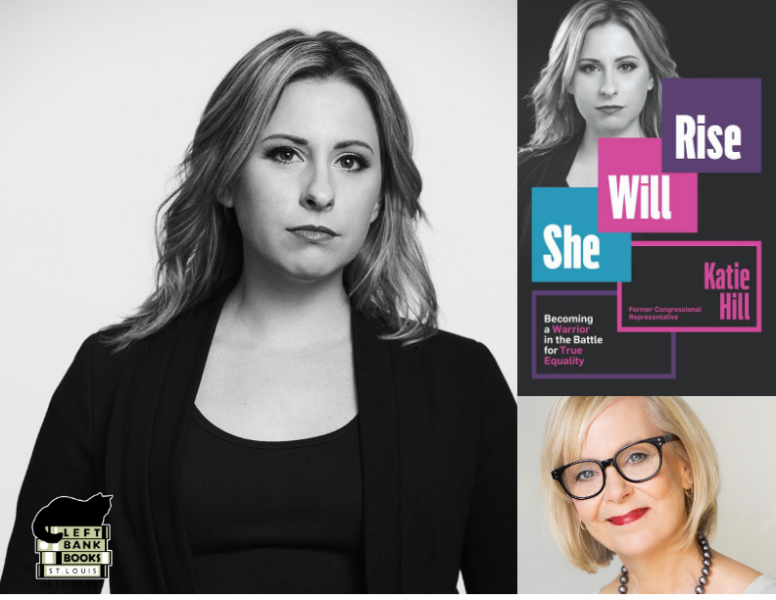 Left Bank Books welcomes former Congresswoman
Katie Hill,
who will discuss her new book,
She Will Rise: Becoming a Warrior in the Battle for True Equality
on Facebook Live at 7pm CDT on September 23.
Hill will be in conversation with founder and director of ProgressWomen
Hon. Stacey Newman.
Join us on our Facebook Page and order a copy of
She Will Rise
from Left Bank Books to support authors and independent bookstores!

Former Congresswoman Katie Hill shares her experience with misogyny and double standards in politics to help women topple the longstanding power structures that prevent them from achieving equality.

In this book, to be published a week before the 100th anniversary of the ratification of the 19th amendment (which gave women the right to vote), Katie Hill looks back on the progress we've made and outlines her battle plan for our future. She details how we can overcome the obstacles holding women back from achieving equal representation in positions of power to create the change we want for the next century. What challenges do women face in the modern era, and what battles will we need to fight in the years to come? Katie Hill is ready to equip readers for the front lines of leadership in all arenas, to guide women in becoming the warriors we need to shape this country for the better.

"So many of us feel disenchanted with the lack of gender equality in public office and high positions of power. We know that things feel imbalanced, but we don't know what to do about it. Katie has endured many trials and tribulations in her fight for this battle. Using her experience, she provides real answers and a roadmap toward equal representation in She Will Rise. This book serves as an inspiration and a utility tool for anyone who thinks the current system in which we operate needs to shift." —Kristin Bell, actor, activist

"As someone who has personally dealt with double standards in politics, I'm captivated by Katie's story. Even as men who have harassed and assaulted women walk the halls of Congress, Katie faced the ultimate double standard--being publicly shamed and forced to resign. What stands out most about Katie's story isn't the tragedy of what she endured, but the courage and resilience she showed in the aftermath. She Will Rise reflects that spirit and shows how, together, women can fight back and create a better and more equitable future." —Lis Smith, democratic strategist

Katie Hill wasn't yet thirty when she embarked on her run for Congress. By thirty-one, she had become not only a member of Congress but a member of congressional leadership. Soon, she was the subject of an HBO docuseries entitled She's Running, a frequent and ratings-generating cable news guest, and one of the Democratic Party's brightest rising stars. Her campaign attracted the support of dozens of celebrities, including Kristen Bell, Chelsea Handler, Alyssa Milano, and Chris Evans, and she managed to flip a Congressional seat under decades of Republican control. She was the first woman to hold the seat, and the first openly LGBTQ woman to be elected to Congress from California. She resigned from her position less than a year after entering Congress, following a scandal that began a national conversation around questions of bisexuality, domestic abuse, cyber exploitation, workplace power dynamics, and what happens when regular people who live regular lives run for office.

Stacey Newman is founder and director of ProgressWomen, a statewide social justice organization that since 2011 has focused on reproductive rights, gun violence, criminal justice and voting rights. She recently retired as a Missouri State Representative in St. Louis County from 2010 - 2018, serving as chair of the House Progressive Caucus.

She Will Rise: Becoming a Warrior in the Battle for True Equality (Hardcover)