Thursday, October 14, 4pm CT
In person at Graham Chapel - Washington University & online
Register for the in person or virtual event here
For the virtual event visit this page on the event date to join
Pre-registration, completing a self-screening, and wearing a mask at all times, are required for all in-person attendees. 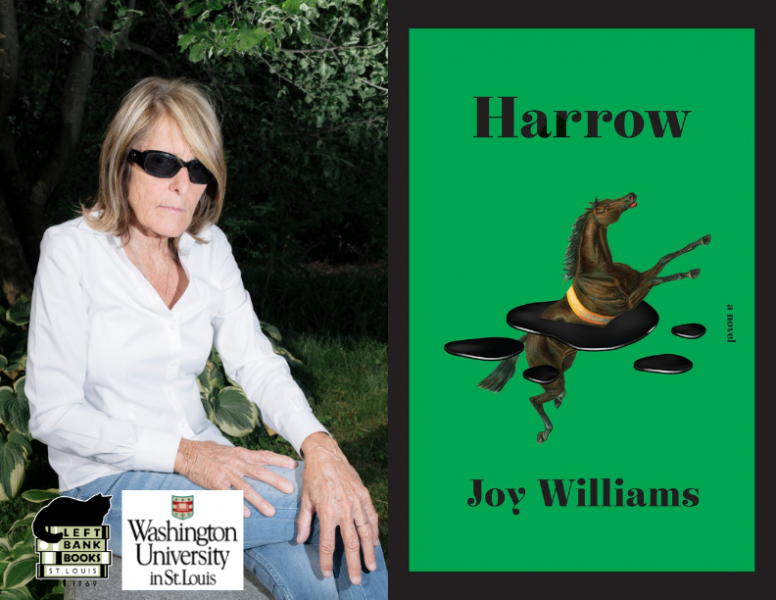 The Washington University Libraries and English Department are hosting legendary writer Joy Williams for a special reading and conversation. Williams’ first novel in 20 years, Harrow, will be released on September 14. The exhibition “Joy Williams: Honored Guest”, featuring materials from the Joy Williams Papers, is on display in John M. Olin Library, with a digital version also available.

This event is taking place in Graham Chapel, and will also be live-streamed and recorded for virtual viewing. Pre-registration, completing a self-screening, and wearing a mask at all times, are required for all in-person attendees. Doors will open at 3:30pm. Virtual attendees are encouraged to register as well to receive a reminder and link to the livestream to your inbox.

As noted above, all in-person attendees must adhere to all of Washington University’s public health requirements, including the latest events and meetings protocol. All guests will be required to show a successful self-screening result and wear a mask at all times to attend the event.

In her first novel since The Quick and the Dead (a finalist for the Pulitzer Prize), the legendary writer takes us into an uncertain landscape after an environmental apocalypse, a world in which only the man-made has value, but some still wish to salvage the authentic.

She practices . . . camouflage, except that instead of adapting to its environment, Williams's imagination, by remaining true to itself, reveals new colorations in the ecology around her." --A.O. Scott, The New York Times Book Review

Khristen is a teenager who, her mother believes, was marked by greatness as a baby when she died for a moment and then came back to life. After Khristen's failing boarding school for gifted teens closes its doors, and she finds that her mother has disappeared, she ranges across the dead landscape and washes up at a "resort" on the shores of a mysterious, putrid lake the elderly residents there call "Big Girl."

In a rotting honeycomb of rooms, these old ones plot actions to punish corporations and people they consider culpable in the destruction of the final scraps of nature's beauty. What will Khristen and Jeffrey, the precocious ten-year-old boy she meets there, learn from this "gabby seditious lot, in the worst of health but with kamikaze hearts, an army of the aged and ill, determined to refresh, through crackpot violence, a plundered earth"?

Rivetingly strange and beautiful, and delivered with Williams's searing, deadpan wit, Harrow is their intertwined tale of paradise lost and of their reasons--against all reasonableness--to try and recover something of it.

"A magnificent and moving novel [that excavates] the middle distance between silence and experience . . . Harrow is a piece of writing in the vein of Samuel Beckett or Franz Kafka, its humor weaponized by rage." --David L. Ulin, Los Angeles Times

"Harrow belongs at the front of the pack of recent climate fiction . . . A crabby, craggy, comfortless, arid, erudite, obtuse, perfect novel, a singular entry in a singular body of work by an artist of uncompromised originality and vision . . . To read this novel is to know and to be known (Galatians 4:9) by a profound and comfortless alterity, to encounter the cosmic otherness at the very core of the self. What else do you want me to tell you? As I've said, it's also funny. I really did laugh a lot. Five stars." --Justin Taylor, Bookforum

"Death-haunted and perfectly indescribable fiction . . . To read Williams is to look into the abyss . . . [She] remains our great prophet of nothingness." --Anthony Domestico, The Atlantic

"The ridiculous, pigheaded, bemused, endlessly distracted and continuously self-sabotaging state of the future is the subject of this wonderfully goading satire . . . A blackly comic portrait of futility . . . This is sarcasm of a high, artistic order, reminiscent of no one quite so much as William Gaddis." -- Sam Sacks, The Wall Street Journal

"Elegantly deranged . . . A hypnotizing novel, funny in places and chilling in others, filled with wacky and tragic characters, that unspools the absurdity in just one of our many very possible bad futures." -- Emily Temple, Literary Hub

JOY WILLIAMS is the author of four previous novels--including The Quick and the Dead, a runner-up for the Pulitzer Prize--and four collections of stories, as well as Ill Nature, a book of essays that was a finalist for the National Book Critics Circle Award. Among her many honors are the Rea Award for the Short Story and the Strauss Living Award from the American Academy of Arts and Letters. She was elected to the Academy in 2008. She lives in Tucson, Arizona, and Laramie, Wyoming.

The Quick and the Dead (Vintage Contemporaries) (Paperback)

Ill Nature: Rants and Reflections on Humanity and Other Animals (Paperback)