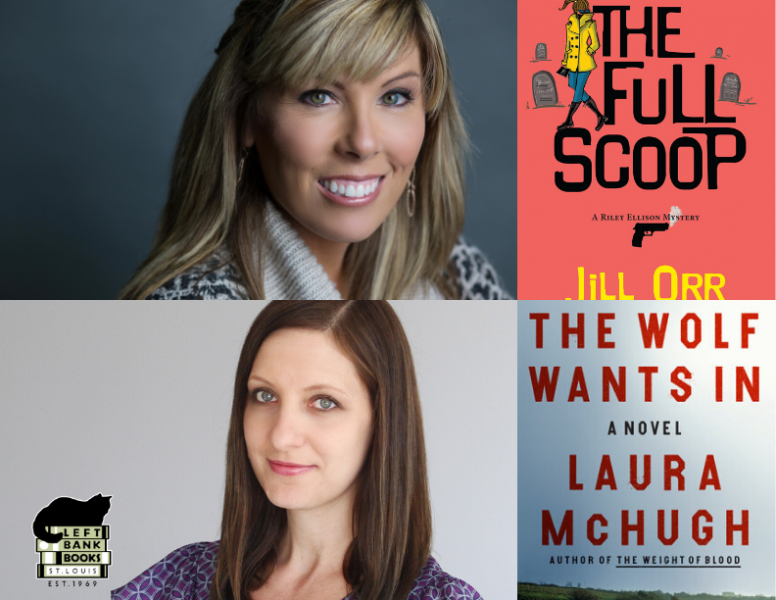 Left Bank Books welcomes Missouri authors Jill Orr and Laura McHugh, who will discuss their new-in-paperback releases--Jill Orr's The Full Scoop and Laura McHugh's The Wolf Wants In--on Facebook Live at 7pm CST on June 11. Join us on our Facebook Page and order copies of The Full Scoop and The Wolf Wants In from Left Bank Books to support authors and independent bookstores!

Reeling after tragedy hits close to home, young journalist Riley Ellison becomes obsessed with uncovering the secret that led to her grandfather's murder years before and that just took another life in Tuttle Corner. Her desperate search for answers leads her down a dark path, both personally and professionally, as she struggles with how far she's willing to go to get answers. Just as she finally discovers the truth, she's forced to choose between exacting justice and protecting the people she loves most. With pressure coming in from all sides, Riley has to look deep within to decide if she can let go of the past in order to hold on to the future.

The Wolf Wants In:

Sadie Keller is determined to find out how her brother died, even if no one else thinks it’s worth investigating. Untimely deaths are all too common in rural Blackwater, Kansas, where crime and overdoses are on the rise, and the small-town police force is consumed with the recent discovery of a child’s skull in the woods. Sadie is on her own, delving into the dark corners of a life her brother kept hidden and unearthing more questions than answers.

Eighteen-year-old Henley Pettit knows more than she’d like to about the seedy side of Blackwater, and she’s desperate to escape before she’s irreparably entangled in her family’s crimes. She dreams of disappearing and leaving her old life behind, but shedding the past is never easy, and getting out of town will be far more dangerous than she ever imagined.

As more bones are found in the woods, time is running out for Sadie to uncover the truth and for Henley to make her escape. Both women are torn between family loyalties and the weight of the secrets they carry, knowing full well that while some secrets are hard to live with, others will get you killed.

Like Laura McHugh’s previous award-winning thrillers, The Weight of Blood and Arrowood, The Wolf Wants In is an atmospheric, beautifully told novel that barrels toward a twisting, chilling end and keeps us turning the page to find out how these small-town secrets will unravel—and who will survive.

Jill Orr is the author of the Riley Ellison mystery series, which has been called "delightfully comic" and "highly amusing" by Publishers Weekly. Books in the series have garnered praise from industry professionals and readers alike and have earned a Silver Falchion nomination, a starred review and "Best Book of the Week" from Library Journal, and a Midwest Connections pick.Originally from Chicago, Jill moved to Columbia, Missouri, to attend the University of Missouri, where she received her bachelor's degree in Journalism and her master's degree in Social Work. However, these days the only social work she does is at cocktail parties, and she sometimes wishes her degrees were in What's for Dinner and Decoding the Teenage Eye Roll.Jill lives in Missouri with her husband and two (usually delightful) teenage children. Jill's new illustrated nonfiction humor book, How Not to Be Old (Even if You Are), arrives in November. Learn more at www.jillorrauthor.com.

The Wolf Wants In: A Novel (Paperback)