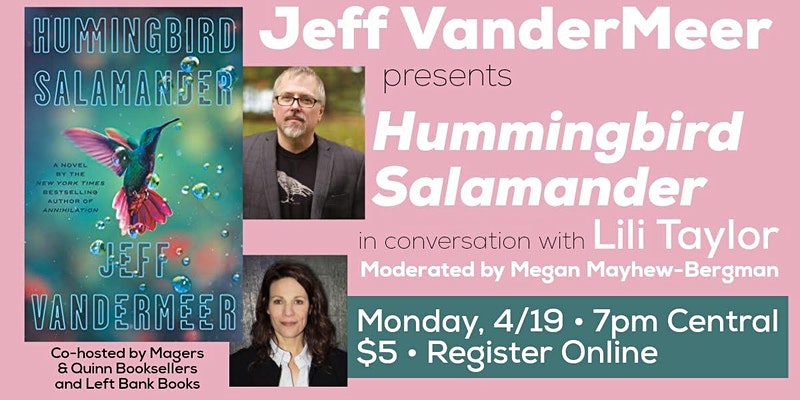 Left Bank Books and Magers & Quinn Booksellers welcome bestselling author
Jeff VanderMeer,
who will discuss his new novel
Hummingbird Salamander,
on April 19 at 7pm CT in a private online event.
Jeff will be in conversation with critically acclaimed actor
Lili Taylor
discussing rewilding their respective yards, birdwatching, nature, the environment, and Jeff's new book. Lili and Jeff's conversation will be moderated by environmental writer
Megan Mayhew-Bergman.
This is an exclusive event that requires purchase EITHER of a copy of
Hummingbird Salamander
or
a $5 Event Ticket
from Left Bank Books for admission.
Note: Book and ticket purchasers will receive the email with the link to join the private online event the DAY OF the event.
Purchase of book and ticket to Jeff's event will provide access to a password protected site with bonus content that includes annotated chapters, downloadable psychedelic art posters of the Unitopia from Hummingbird Salamander, behind-the-scenes tidbits and easter eggs, exclusive one-sheets about the mythic creatures created for Hummingbird Salamander, and much more.

From the author of Annihilation, a brilliant speculative thriller of dark conspiracy, endangered species, and the possible end of all things.

Security consultant “Jane Smith” receives an envelope with a key to a storage unit that holds a taxidermied hummingbird and clues leading her to a taxidermied salamander. Silvina, the dead woman who left the note, is a reputed ecoterrorist and the daughter of an Argentine industrialist. By taking the hummingbird from the storage unit, Jane sets in motion a series of events that quickly spin beyond her control.

Soon, Jane and her family are in danger, with few allies to help her make sense of the true scope of the peril. Is the only way to safety to follow in Silvina’s footsteps? Is it too late to stop? As she desperately seeks answers about why Silvina contacted her, time is running out—for her and possibly for the world.

Hummingbird Salamander is Jeff VanderMeer at his brilliant, cinematic best, wrapping profound questions about climate change, identity, and the world we live in into a tightly plotted thriller full of unexpected twists and elaborate conspiracy.

Jeff VanderMeer is the author of Dead Astronauts, Borne, and The Southern Reach Trilogy, the first volume of which, Annihilation, won the Nebula Award and the Shirley Jackson Award and was adapted into a movie by Alex Garland. He speaks and writes frequently about issues relating to climate change as well as urban rewilding. He lives in Tallahassee, Florida, on the edge of a ravine, with his wife, Ann VanderMeer, and their cat, Neo.

Lili Taylor is a multifaceted award-winning actor who has conquered film, television, and stage. She recently appeared in the HBO limited series PERRY MASON, and can currently be seen in the independent feature PAPER SPIDERS, as well as the Netflix series CHAMBERS opposite Uma Thurman and Ciaran Foy. On film, she’s best known for her work in a plethora of independent classics such as Mary Harron’s I SHOT ANDY WARHOL, Robert Altman’s SHORT CUTS, and Stephen Frears’ HIGH FIDELITY. Her work spans across all mediums, where she has won a Golden Globe, been nominated for three Primetime Emmys, and won an Independent Spirit Award. On television, she portrayed the Emmy nominated Anne Blaine/Nancy Straumberg/Claire Coates on John Ridley’s AMERICAN CRIME opposite Regina King and Timothy Hutton. She also had recurring roles on the Emmy nominated shows HEMLOCK GROVE and ALMOST HUMAN and the Golden Globe winning HBO series SIX FEET UNDER, opposite Peter Krause and Michael C. Hall.

Megan Mayhew-Bergman is the author of Birds of a Lesser Paradise, Almost Famous Women, and the forthcoming How Strange a Season. She's a visiting professor of Literature and Environmental Studies at Middlebury College, where she also directs the Bread Loaf Environmental Writers' Conference. She writes regularly about the environment, most recently for Audubon and The Guardian, where her column on climate change won the Reed Environmental Journalism Award.

You may purchase a copy of Hummingbird Salamander from Left Bank Books online or by phone. Purchase of the $5 Event Ticket is also available online or by phone. You must provide an email address to be invited to the private online event. If you have purchased either the book or $5 Event Ticket from Left Bank, you will receive an email event reminder a few days prior to the event. You will receive the email with the link to join the private online event the DAY OF the event.