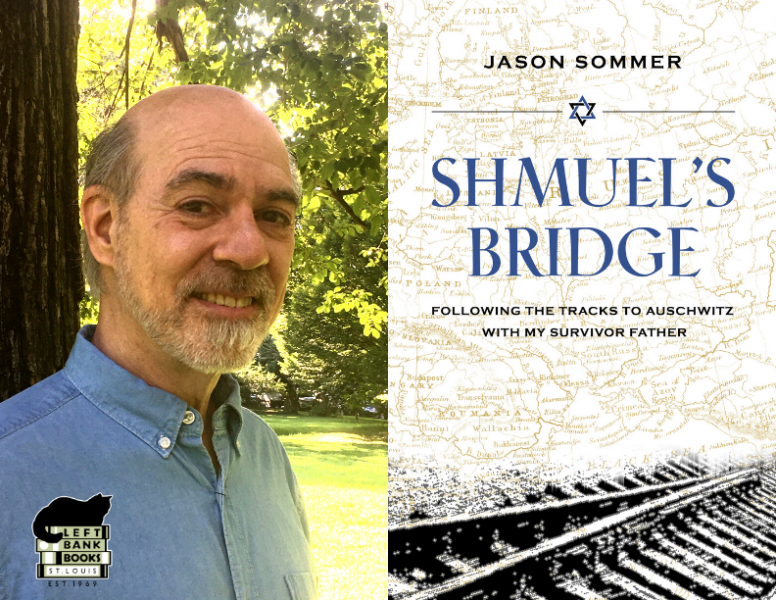 Left Bank Books & Central Reform Congregation welcome St. Louis author and poet
Jason Sommer,
who will discuss his new memoir
Shmuel's Bridge,
in person at Central Reform Congregation
and virtually on our Facebook Live Page at 7pm CT on March 24th.
Join us in person or on our  YouTube or Facebook Live Page and order a copy of
Shmuel's Bridge: Following the Tracks to Auschwitz with My Survivor Father
from Left Bank Books to support authors and independent bookstores!

About our Speaker
Jason Sommer is the author of five poetry collections, most recently Portulans in the University of Chicago's Phoenix Poets Series. He has been recognized with an Anna Davidson Rosenberg Award for poems about the Jewish experience and read from his work at the National Holocaust Memorial Museum's program "Speech and Silence: Poetry and the Holocaust." A former Stanford University Stegner Fellow, he has held a Whiting Foundation writers' fellowship as well as fellowships from the Bread Loaf and Sewanee writers' conferences. With Hongling Zhang, he has published collaborative book-length translations of Chinese fiction: Wang in Love and Bondage: Three Novellas by Wang Xiaobo and The Bathing Women by Tie Ning, which was long-listed for the Man Asian Literary Prize. Sommer lives in St. Louis, Missouri.
About Shmuel's Bridge: Following the Tracks to Auschwitz with My Survivor Father
A moving memoir of a son's relationship with his survivor father and of their Eastern European journey through a family history of incalculable loss.

Jason Sommer's father, Jay, is ninety-eight years old and losing his memory. More than seventy years after arriving in New York from WWII-torn Europe, he is forgetting the stories that defined his life, the life of his family, and the lives of millions of Jews who were affected by Nazi terror. Observing this loss, Jason vividly recalls the trip to Eastern Europe the two took together in 2001.

As father and son travel from the town of Jay's birth to the labor camp from which he escaped, and to Auschwitz, where many in his family were lost, the stories Jason's father has told all his life come alive. So too do Jason's own memories of the way his father's past complicated and impacted Jason's own inner life.

Shmuel's Bridge shows history through a double lens: the memories of a growing son's complex relationship with his father and the meditations of that son who, now grown, finds himself caring for a man losing all connection to a past that must not be forgotten.

♦ Poet Sommer ( Portulans) movingly combines a Holocaust memoir with an intimate account of his relationship with his survivor father. When, at age 98, his father, Jay, began to lose some of his memories, Sommer was desperate to find a way to preserve them. After escaping from a labor camp in Budapest in 1944, Jay had joined the Russian army and later emigrated to the U.S., where he got his college degree, had a successful teaching career, and built a family. In an effort to keep those and earlier memories intact, Sommer hit upon the idea of showing Jay videos from a trip they had taken in 2001 to eastern Europe to witness the places "that were the setting of his Holocaust experiences." As the two revisit these memories together, the past and present beautifully collide in evocative prose and excerpts of poetry ("he's penned beneath/ the stairs of a Budapest apartment house/ for days, in terror") that whisk readers from the steps of Erzsébet School in Budapest--where Jay and other survivors began their "struggle toward a new life" in 1945--to the bridge where father and son commemorated the death of Jay's brother Shmuel, who was killed en route to a Nazi camp. This stunning tribute isn't to be missed. -- Publishers Weekly, starred review

For the in person event, we would ask that you RSVP through this Google Form. The presentation and conversation will start at 7pm at the Central Reform Congregation, 5020 Waterman Blvd, St. Louis, MO 63108. Vaccination is required for in person attendees.

For the virtual event, you can watch live on Left Bank's YouTube channel. This event will also stream to Central Reform Congregation's platform (link forthcoming).